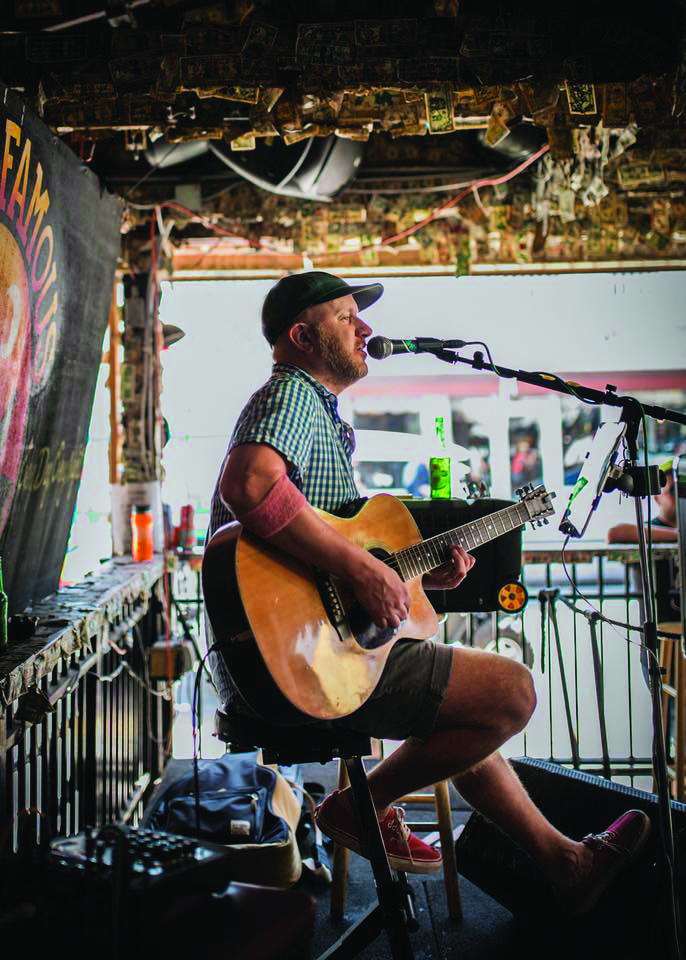 Tony Durante (aka Tony Baltimore) is a Key West musician with quite the eclectic following. His current lineup of venues includes popular establishments such as the Green Parrot, Willie Ts, Sloppy Joes, and Blue Heaven. Now, he shares his thoughts on Moby, veganism, politics, and even Bro-Country.

Kevin Assam: Lets clear up this Baltimore thing. Are you obsessed with the city?

Tony Baltimore: Maybe a little. Its a nickname I was given in Tampa many years ago and certainly not something Id go by in the actual city of Baltimore. It sort of followed me here. I like it because people from Baltimore or even Maryland usually have an instant connection with me. Usually Im Tony. That is, unless my mother, grandmother or lady are mad at me    in that case Im Anthony. Although, my friend Toby used to call me Professor X due to my bald head.

Was Professor X of any interest to you growing up in your pre-bald era?

Possibly, he was the leader of the X-Men after all. But prior to my bald head I had fairly long blond hair. So, Id say I was also rather fond of Bodhis    Patrick Swayze     hair in Point Break. Now, I rather lean towards the Bruce Willis look and firmly against the Moby look.

Youre saying you werent a fan of Mobys music or just his personal look? Play was a pretty impressive album.

I dont give a fuck about Moby, never have. His music is shit aside from that Jason Bourne song. I liked that. Moby is responsible for waking a bunch of annoying, slumbering vegans and now we all have to listen to them bitch about our diets.

Many vegans advocate from the point of sustainability. The sheer volume of clean water used to produce a vastly disproportionate quantity of meat for example. In a time of extreme climate degradation, is their approach better long term?

Look, eat what you want and be a responsible person. But could you leave me alone while doing it? Maybe eat less. Its not like vegans are the skinniest and healthiest lot of the bunch. Im all for sustainability. This very island could focus on sustainability. but there doesnt seem to be too much focus on that, is there? And you cant even touch the chickens here! Let alone eat them. There are starving people in Marathon. Im kidding. We shouldnt joke.

Who got you your first instrument?

My parents bought me my first drum set when I was in the fourth grade. My first guitar we acquired against my aunts will when I was in eighth grade. Something about wanting one of my cousins to play it. That never happened. You have to take what you want in this world, right?

How did you discover your vocals werent too shabby?

Someone had to do it and it fell to me. The band I was in years ago was called Skip, Hop & Go Naked. I only sang backup and the occasional tune. I wrote a lot, but it was more of a group effort. The songs I wrote on my own wouldnt have got into that band so, I went my own way. Here I am.

Was coming to Key West an acceleration of your ambition?

I dont know what I was looking for. I dont think it had anything to do with ambition. Im not sure I was looking for anything because my life in Baltimore was a good one. I wanted a change of scenery and Key West suited my needs. I wasnt running from anything. I certainly wasnt unhappy, Geography cannot fix whats inside of you. I was a happy man when I arrived here. Im a pretty happy person. Gleeful Id say. Its not lost on me that Im rather excitable. Maybe too excited at times. Thats why I stopped drinking coffee many years ago.

How do performers get their first stable gig in an island arguably crowded with talented musicians?

Depends on what you consider talent. Ever see a douchebag with a beautiful girl on his arm? Some are just all gimmicks. That should tell you enough. Ever listen to any Bro-Country before? Lets leave it that.

Do things ever get political with your sets or audience members these days?

I wont allow for that. Sometimes someone will say something in jest. I dont engage. I certainly have my political beliefs. I dont find it appropriate to share them onstage. People come to Key West to escape their everyday lives. If they want to bring that part of their lives with them on vacation then let them play the fools. But you wont hear me saying that kind of thing on the microphone. Now, if I was in a different setting, say a ticketed event, then sure. Ill say whatever I want because you clearly know what Im about. People know what Bono stands for when they go see a U2 concert. They also know that Kid Rock is a moron, but they go anyway. I do not subscribe to the notion that I should keep my opinion to myself because my job is to entertain. Im not a chimp. I work with my hands and have spent the better part of 30 years honing my craft just like a plumber or an electrician. But its okay for them and not me? Fuck that. Ill say whatever I want to say. Ill just try to be kind when I do it.

For his latest music visit TonyBaltimore.com. Interview has been edited for clarity and condensed