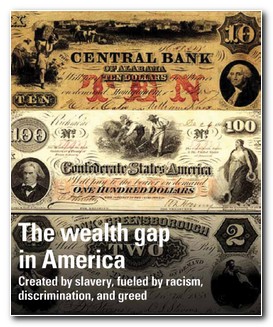 Seattle, WA – In 1863, slaves were worth three billion dollars ($83 billion in today’s dollars), then you realize that the most valuable thing they owned – the thing that built the wealth white Americans still benefit from today – were Black people. You might think that, from the end of slavery to now, the racial wealth gap would have decreased but in actuality, to this day, white Americans have an annual income substantially higher than Black Americans. The median household income (as of 2018), when you add savings and assets and subtract debt, is $171,000 for whites and $17,000 for Blacks.

Why is this gap still so large? Everything goes back to slavery. When Special Field Order No. 15 was issued by Union Gen. William T. Sherman in January 1865, America had the opportunity to become a different place. This order seized roughly 400,000 acres of land, from Charleston, South Carolina, 245 miles south to Jacksonville, Florida. This land was intended for newly emancipated slaves. President Lincoln signed the bill that made these plans official. However, a few weeks later he was murdered, and his successor, Andrew Johnson – who complained about discrimination against whites, “in favor of the negro” – quickly backtracked on these plans, evicting thousands of slaves whose families had spent hundreds of years creating wealth for slave owners. This mindset has prevailed throughout history. The moment equal rights become widely discussed in favor of Blacks, the backlash from whites always comes: “What about our rights?” This is something we have seen again recently in response to the Black Lives Matter movement, with some whites proclaiming, “All Lives Matter” – disregarding the fact that not all lives are equally in danger.

White Americans have had a 300-year head start in acquiring and building wealth, with compounding interest as a benefit they have been able to take advantage of that has contributed exponentially to the growth of the wealth gap. Furthermore, the US government has allowed Blacks to be excluded from one of the most lucrative paths for compounding interest (outside of the stock market): the real estate market. In this century, more than half of middle-class wealth has been acquired through homeownership. Through redlining, the Federal Housing Administration (FHA) wouldn’t approve mortgages in “high-risk areas,” and the way the risk was determined was by race. So how do you close this huge wealth gap between Blacks and whites? Even the term sends ripples of disgust and dismay through white communities. Dr. Martin Luther King Jr. stated: “A society that has done something special against the Negro for hundreds of years must now do something special for the Negro.” And that special thing would be reparations. It would be the fastest way to fight back against government policy that keeps perpetuating the racial wealth gap. (Seattle Gay News – Janice Athill Read the full article at http://sgn.org/sgnnews49_33/page3.cfm)