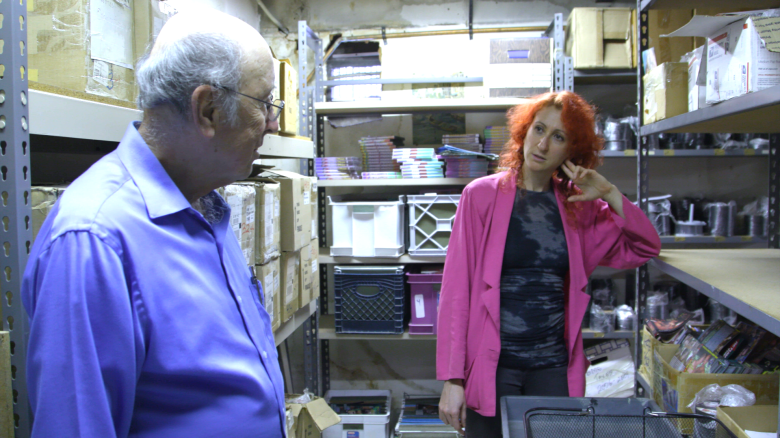 As was to be expected, there was also a degree of secrecy involved about their line of work. They didn’t talk about the family business in the family or with friends. The sanctioned answer to what they did for employment was, “we own a bookstore”. The more thorough answer is that it was a “hardcore, gay adult business” complete with cruising in the stacks, and a “Vaseline alley” hook-up area in the alley behind the store.

When an opportunity to become a distributor of Larry Flynt’s notorious materials, including gay porn publications such as “Blueboy”, “Honcho” and “Mandate”, presented itself, Barry took the job. Shortly thereafter, one of the businesses to which Barry made deliveries was in need of a new tenant and Circus of Books was born, with Karen and Barry as owners. With such a venture, came all sorts of new experiences, including becoming familiar with both the merchandise, such as publications, videos and sex toys. In one scene, adult Rachel accompanies Karen to an adult products expo. Before long, the Masons became involved in the production of gay adult movies such as “Stryker Force”, starring Jeff Stryker, and then became the biggest distributors of gay films in the US

The lucrative, but polarizing, market led to an FBI sting operation during the extremely conservative Reagan era. At the same time, they bore witness to the AIDS epidemic, as many of their employees and customers were dying. Ultimately, it was the impact of internet which had the longest lasting effect. Still profitable but not sustainable, the Masons made the difficult decision to close after 30 years.

Mason has crammed a lot under the big top of her movie, some of which borders on being unfocused and self-indulgent. However, the sections about her brother Joshua’s coming out and Karen’s response due to her conservative religious background, are extremely moving and powerful. Rating: B-