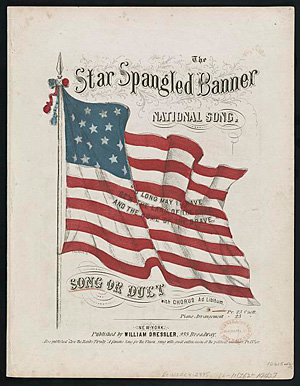 It turns out the answer is yes. In 1944, Russian-born composer and pianist Igor Stravinsky received a warning from the Boston Police over his instrumental arrangement of “The Star-Spangled Banner.” The police wrongly believed that there was a law against “tampering” with the national anthem, and Stravinsky pulled his arrangement from the program of upcoming concerts in compliance. Stravinsky, who settled in the United States in 1939 and became a citizen in 1945, penned his arrangement out of a “desire to do my bit in these grievous times toward fostering and preserving the spirit of patriotism in this country.” His arrangement is both a tribute to America’s role in WWII and a portrait of what our country is and can be.

Though not illegal, Stravinsky’s arrangement was deemed “offensive” because he dared to alter the harmonies of our national anthem by adding a 7 chord. A 7 chord is dissonant, a clashing of two tones that are separated by only half a step in the musical scale. This decision was purposeful, an acknowledgment of the inevitable frictions that arise from a free and democratic society that allows different opinions, beliefs, and values. His use of the middle voices of the orchestra is a reflection of the role and importance of the ordinary, often overlooked people who drive our country and make America what it is. Stravinsky’s arrangement is a portrait of America through the eyes of a former outsider and soon-to-be citizen.

We are no strangers to the clashing sounds of dissonance. Our history is fraught with conflict that is not heard in the smooth, complementary tones of our anthem. As a child, I was taught that America is a melting pot that homogenizes and makes equal all the cultures comprising an immigrant country. The message was that America makes everyone the same and therefore equal. Except this analogy isn’t true. Now, the melting pot is gone and has been replaced by a salad bowl—we are comprised of different cultures, but each culture maintains its own distinct differences. These differences are what makes the salad delicious and not a bowl of pureed mush.

Our community is familiar with dissonance, too. Being queer is like being the 7 in a chord—we are our own tone, just like everyone else, but we don’t fit as neatly in the harmony as others. Sometimes people think we’re “offensive” and don’t belong with all the other notes because adding us to the mix creates a clash. Like the Boston Police, some think that our inclusion somehow ruins something that is meant to represent everyone but actually only represents their own dominant culture. They would prefer we be something else, something that complements their own, established, “traditional” ways.

This is why it’s important that we stand our ground and hold the 7. The discomfort of our dissonance is that we’re only half a step apart and that distance feels so close and yet impossibly far. There is an inherent beauty in dissonance because this distance makes us want to connect, to close the gap and live in harmony. It is the dissonance that compels us to move forward, to resolve the tension that we all feel. The tension is not created solely by the 7, but the overall structure of our context.

For the 7 to fit, we have to keep going. We need more melody, more harmony, more ways of relating to and combining with all the sounds and tones of America in a quest for resolution. Stravinsky got it right–our dissonance is not what mars us, but spurs us forward into change, progress, and innovation. Dissonance is the sound of freedom, and there isn’t anything offensive about that.