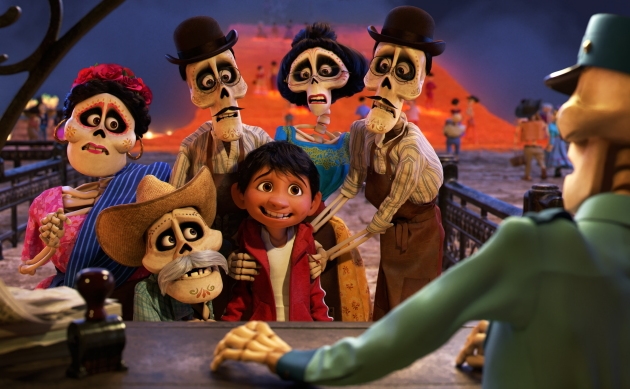 A bent take on the year in cinema

You’ll hear a lot of different opinions about the movie year of 2017. Some people think it was an absolute crap year for film, some will point out the few truly great films of the year, and some will call it an average year. I’ll call it average. There were quite a few films I enjoyed (and for the record there are a lot of 2017 releases I’ve yet to see), but there were few films that fall into my “I’d watch that again” category. Some films unexpectedly caught me off guard, and others failed to live up to expectations. Kingsman: The Golden Circle, Guardians of the Galaxy Vol. 2 and The Lego Batman Movie were fun, but went for the “let’s throw everything and the kitchen sink in” approach to top their predecessors … and excess does not equal success. Alien: Covenant basically remade the original Alien and tried to justify the existence of Prometheus. Dunkirk was a brilliant exercise in filmmaking, but the disjointed storytelling and lack of any character development left it devoid of emotion. Will Ferrell and Amy Poehler could not generate many laughs with The House, and Matt Damon failed to score with The Great Wall, Suburbicon, or Downsizing. So, there was a lot of disappointment this year, but there were many highlights. 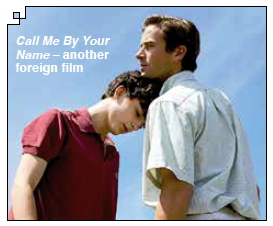 I know I should probably include Call Me By Your Name on my favorites list, but I’m not sure it’s as great a movie as most critics think it is. It’s beautiful, the actors are terrific, but it’s slow, artsy style left me a little bored and some of the filmmaking techniques were a bit “foreign film” cliché. What follows is a list of films that I enjoyed, movies that had me smiling – or crying – as the credits rolled. Many of these films would never find their way onto a mainstream Top Ten list, and that’s fine. I’ll march to the beat of my own drum, thank you very much. As a movie buff, these are the films that got my blood pumping…

In general, the horror genre had a pretty successful year. Even though the year kicked off with the dreadful The Bye Bye Man, horror fans were rewarded throughout the year with a collection of films that included Get Out (which is topping many end of year lists), Happy Death Day, Better Watch Out, Annabelle: Creation, and It (you can also throw The Mummy in there too, even if it was more action than horror). Get Out had its social commentary, Happy Death Day put a clever spin on the horror/comedy genre, Better Watch Out was a not bad Christmas horror flick (that was released straight to video), and Annabelle: Creation and It gave us some good, old school thrills.

Pirates of the Caribbean: Dead Men Tell No Tales successfully wrapped up the Captain Jack Sparrow saga, and after a couple of not very well received outings, this one had some terrific action and stunts, a great villain in the form of Javier Bardem, and a pretty emotional climax that also resolved the fate of another regular character. And they cleverly left the door open for the series to continue with another character. Overall, it was much better than it had any right to be. 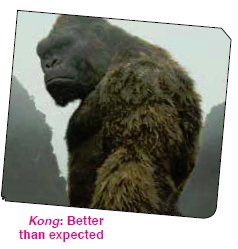 Kong: Skull Island was also better than expected. I really wasn’t a fan of the Godzilla reboot, so I went into Kong with some aprehension. Where the film grabbed me was with its 1970s setting, a total surprise. It had some great action, amazing CGI effects in rendering Kong as a living, breathing creature, a lot of human emotion (even if some of the characters were simply thrown away), and was not just another remake of the classic King Kong story. And the whole thing stands on its own, but has just enough information there to tie it into the inevitable Kong vs Godzilla mash-up.

Thor: Ragnarok was also a major surprise. The first two Thor movies suffered a bit by taking themselves much too seriously. These are comic book movies, for Pete’s sake, lighten up a bit (something the folks over at DC Comics attempted to do with Justice League). By hiring a director with zero experience with comic book movies or ginormous budgets, Taika Waititi delivered the comedic shot in the arm Thor needed to succeed. The movie is visually stunning, borrowing heavily from the look established by James Gunn for Guardians of the Galaxy, has some great action, and is funny without being overly silly. Chris Hemsworth proves he can deliver a punchline as well as a punch, Cate Blanchett makes for a sultry villain, and Jeff Goldblum does the best Jeff Goldblum he’s done in years. Thor: Ragnarok was one of the two most satisfying superhero movies of the year.

The other, of course, was Wonder Woman. After a small role in Batman v Superman: Dawn of Justice, we got the backstory of Diana, and the film works on so many levels because it is its own thing. The movie takes place in the midst of World War I (instead of the more familiar Second World War of the source material), so it’s not tied directly to either Batman v Superman or the Justice League follow up. And while there have been some complaints about one of the film’s villains, the movie still has given young girls and women of all ages a superhero of their own, and has become the most successful movie ever directed by a woman. In a year that saw the rise of the #MeToo movement and the exposure of rampant sexual harassment in the movie industry and beyond, Wonder Woman became another symbol for female empowerment.

Going back to World War II, there were three movies taking place during that global event: Dunkirk, Darkest Hour and Their Finest. You’ve probably heard of the first two, but may have missed the charming third film on that list. Their Finest focused on a woman hired by a film company to help make British war propaganda films and the romance that developed between her and a co-worker, even though she was married. The film gave us characters we cared about, had some beautiful period detail, cleverly put us in the middle of the bombing of London without actually seeing the event, and delivered much more emotion than Dunkirk was able to muster. Their Finest didn’t get a wide release, but it’s definitely one worth seeking out. 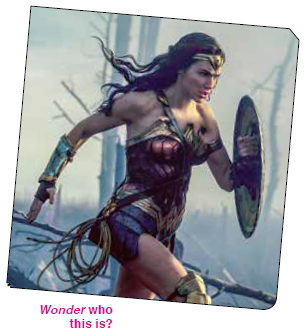 And speaking of period detail, Battle of the Sexes brought the 70s back to life in style. The story of the infamous Bobby Riggs / Billie Jean King tennis match had two great performances from Steve Carrell and Emma Stone that took us deeper into each person’s life than merely the tennis rivalry. The movie did not shy away from King’s budding romance with hair stylist Marilyn Barnett as King grappled with her love for her husband and her own sexual identity. Andrea Riseborough and Sarah Silverman also turned in some nice performances, and the story even has a contemporary connection with Margaret Court who, back then, railed against the lesbianism she suspected was permeating the sport and today has been a vocal advocate against same-sex marriage in Australia. Battle of the Sexes didn’t make much of a splash at the box office, but it was one of the more entertaining films of the year that seems to be getting unjustly snubbed by the various awards committees.

There were two unusual love stories this year as well. Disney successfully brought their animated classic Beauty and the Beast to brilliant life in a gorgeously mounted musical directed by Bill Condon (Chicago, Dreamgirls). The film had a lot to live up to not only from the source material (and the Broadway musical) but coming after the successful remake of The Jungle Book as well. The film was lavish, made a great argument for the use of 3D, and left me an emotional wreck as the credits rolled. The other beauty and beast tale this year was The Shape of Water, which featured a mute woman and her connection to and romance with a creature known only as Amphibian Man, a sort of Creature from the Black Lagoon but with more humanoid characteristics. Set in Baltimore, the film was more a sly commentary on the social mores of the 1960s with a core group of characters considered outcasts of society at that time: a mute woman, a black woman, a gay man … and a misunderstood “monster.” It may not be a fairy tale for everyone, but I enjoyed it.

My favorite movie of the year, hands down (and this one surprised even me), was Pixar’s Coco. The Pixar team knows how to tailor their animated films for all ages even when they skew more to the younger crowd. Toy Story 3 was a profoundly emotional film for adults, and Coco falls into that category as well. In fact, the movie is more for adults than children (there’s a murder, for Pete’s sake!) as it teaches us to value and remember those who came before us. Even weeks after seeing the movie, I still get teary-eyed thinking about it, and that is the mark of a great film. The animation is colorful and stylized, alternating between the real world and the fantastical land of the dead, but the storytelling is spot on, grabbing your heartstrings and never letting go. If there was one movie that was profoundly moving this year, one that fired on all cylinders, it was Coco.

So, 2017 wasn’t so bad after all. There were only a few films I actively hated, many were just okay but the good (and great) outweighed the merely adequate. We’ll pop a cork to celebrate the movie year that was and pop some corn for the movie year to come!