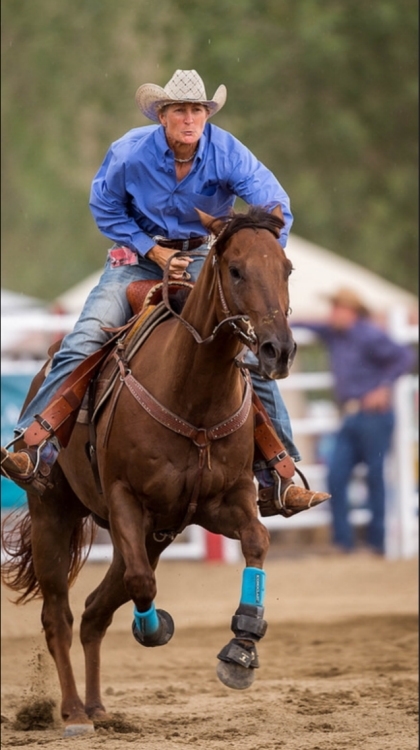 Born in Dallas, and raised in Irving, Texas, Pratt has been involved with IGRA for over the last 28 years. Her tireless work ethic, competitive spirit and positive heart are what helped her to personify the Western lifestyle that IGRA promotes in all its competitors.

For Pratt, it all began when she was eight years old. “I was in third grade and my parents bought me a pony.” Pratt explained exclusively to Baltimore OUTloud. “I grew up in the city, in Irving, but we boarded my pony outside of town. On weekends, we would go out there and I would take part in playdays.” Playdays are informal competitions featuring speed events and games.

“I met a bunch of kids there, and my parents came to watch me,” Pratt recalled, “My dad was very competitive. He was a really good football player, and he was even drafted for minor league baseball. He didn’t get out of the minor leagues because they wanted him to be a catcher, and he didn’t want to be. He wanted better for me. He saw this little pony that really couldn’t run that well and he thought, ‘I need to get my daughter a better one.’ From there I did high school rodeos and eventually I would go on to win 12 world-championship titles in several well-known horse associations throughout the US.”

In 1988, Pratt saw an advertisement in Fort Worth for what would become her first gay rodeo. “I was surprised because I didn’t even know there was such a thing,” Pratt explained. “So, I went to my very first one and the rest was history. I didn’t know all these other events, such as the camp events and rope events. I just knew how to do flags and barrels.”

Pratt continued, “I continued to go for the next few years, and then I met Murmur Tuckness and her partner Sande Miller. They told me that I needed to learn how to rope because to be eligible to be the All Around [titleholder] you must complete in three out of four categories, but place in at least two. It was then, in 1991, that I went to the Wichita finals. I was sitting in the crowd for awards and when they called me up. I had earned my first All Around Cowgirl award, which is much harder to achieve at finals.”

Since then Pratt has now won 100 rodeo all around titles, her hundredth was awarded this year at IGRA’s milestone 500th rodeo at Best Buck in the Bay. Additionally, she won her 12th IGRA All Around Cowgirl title this year in the Albuquerque rodeo finals.

It was during a convention in Minnesota that Pratt met her future partner, Doreen. “We met at the rodeo there and we will have been together for 25 years this 2018,” she says. Pratt explained that she and Doreen do compete against each other in different rodeos held throughout the country. “It goes really well competing against each other. We’re each other’s biggest fans.” Adding with a laugh, “It all goes to the same bank account. We both cheer each other on.”

Pratt, who works outside the rodeo circuit full time in the corporate world, has a long-storied history with the IGRA. She had been a delegate at many IGRA conventions, served on the Rodeo Rules committee, and as a trustee. In 2003, she founded the Red River Rodeo Association and served as president until she assumed the role of trustee. She was inducted into the IGRA Hall of Fame in 2009, and was awarded the Grand Marshall at this year’s IGRA finals.

Most recently, Pratt took on the charge as president of the International Gay Rodeo Association through December 2018. Overseeing the many local associations throughout the country, Pratt’s dedication and laser focus will help to propel IGRA to the heights of success. Continuing the IGRA’s mission of providing family-friendly events, her focus is to build recognition of contestants and audience participation throughout the rodeos. Along with audience entertainment and interaction, Pratt continues to lead the charge into 2018 by fostering new rodeo contestants through mentoring programs, enhancing rodeo productions, and securing sponsorships. With her focus and drive, Pratt’s dedication to the rodeo will help IGRA soar to the heights of success this upcoming 2018 year.

Save the date for the local 2018 IGRA rodeo: The Keystone State Charity Rodeo, June 22nd through 24th, 2018, in Harrisburg, Pennsylvania. The Keystone State Charity Rodeo is a family-friendly unique rodeo experience. Men, women, members of the LGBTQ community, and their straight allies will be competing equally in all rodeo events. For more info, it’s Ksgra.org and Igra.com.