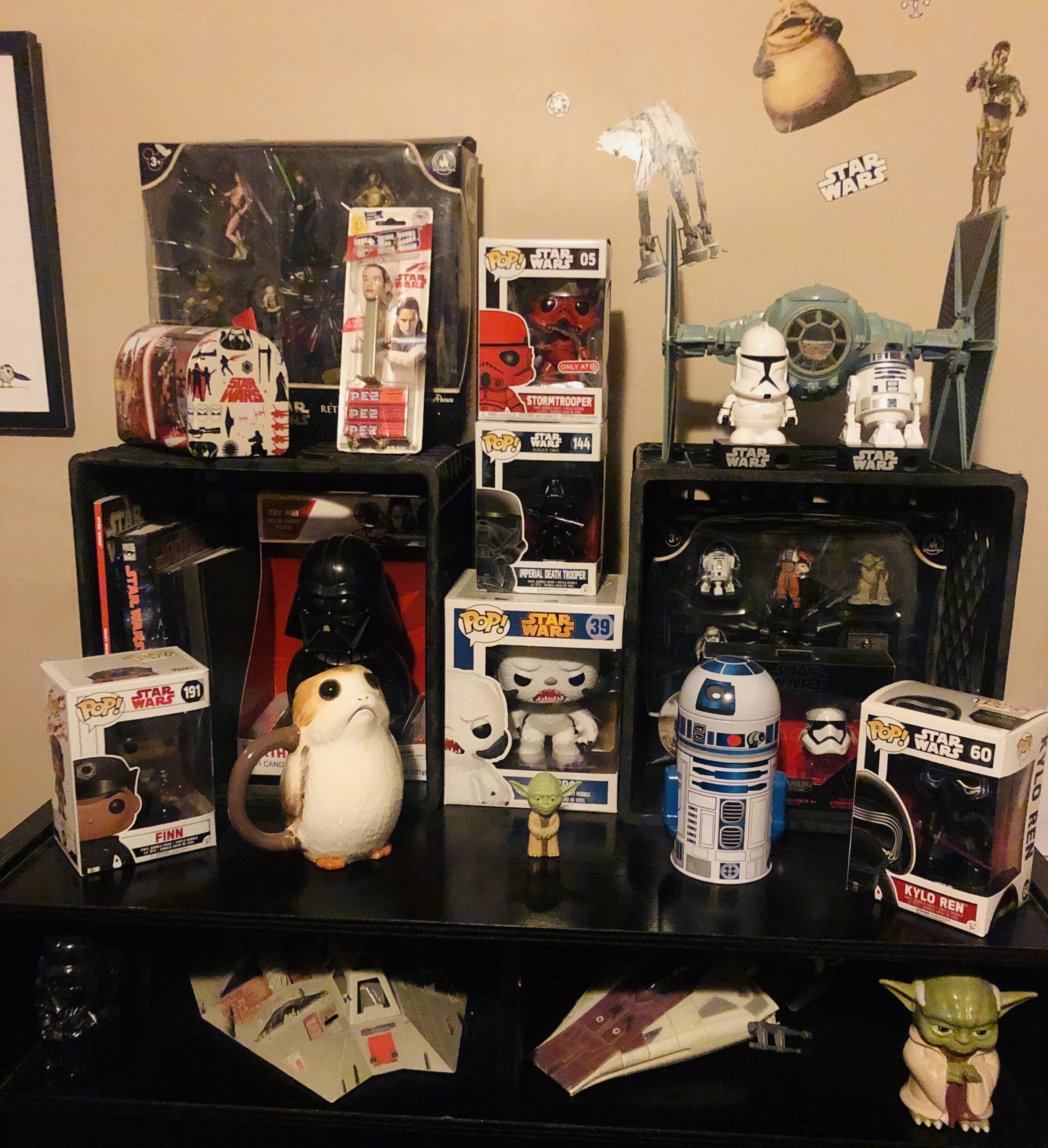 Star Wars is my favourite thing. Obviously, I love my wife, pets, and family / friends more than Star Wars, but as for physical items, Star Wars wins, and has for a vast majority of my life. I was six or seven when in an attempt to enjoy child-free silence and get some work done, my father, flipping through the channels, stopped at the beginning of the trash compactor scene. When I used that moment to remark that I like space and science, I opened Pandora’s box with a sledgehammer. I have had a Star Wars cake every single year since I was ten. The best cake toppers have become part of a collection that now consumes the room we consider to be my office / guest bedroom. Pop figures, original action figures, and sets that were gifted to me, and a lifetime of wall art and posters coat the walls and furniture. A large TIE fighter is imprinted on the top of the quilt. There are life-size figurines of both Darth Vader and BB-8. Most of my socks and underwear are Star Wars themed. Star Wars is my favourite thing, and technically it ends next Friday.

Well, Saturday for my wife and me. She’s been such a tolerating champion over the years. Not just sitting along through movies and at least 50 different explanations of the entire timeline (she knows what BBY means because she’s heard it ten trillion times). She took me to see the NSO perform The Force Awakens with the movie playing because she knew it would cause me to cry happy tears. She could care less who Rey’s parents are, and it matters not that Darth Sidious apparently survived his exhaust shaft fall. She just knows that every time I hear that opening crawl music, I am sprinting to the television at full force.

Remember when I mentioned that I couldn’t sleep during the MLB playoffs because I was too nervous about how the Nationals were doing? I have been forcing myself to stay away from every potential leak about Episode IX, while simultaneously wanting to know every single detail of every single frame of footage. I know that thanks to Disney, there will be new, original(ish) content for at least the foreseeable future, but for the real deal, my journey to “A long time ago in a galaxy far, far away” is coming to an end. And I am a literal kid at Christmas about it.

Star Wars has existed before I was a blip of existence, and until I was in the fifth grade and buzz for the prequels began, it was completed before than as well. And then as I hit adolescence and dysphoria crashed over me, those films distracted me from hating myself. I didn’t have to listen to the voice screaming in my head that I was a boy, I could instead comment on how horrible dialogue about sand could be in a movie about laser-sword-dealing-warriors, and it saved me.

One of my favourite memories is waiting in line with my brother to see Revenge of the Sith. It was the spring of my senior year, and it was one of our last good coming-of-age memories before I went away to college. It’s an endearing one, him and I sneering at a couple who swore Palpatine wasn’t Sidious. Then later yelling at the people in front of us to put their lightsabers away so we could watch the movie. Introducing the expanse that is my favourite thing to my future kid is a big reason I want to be a dad. Even if they hate it, especially if they hate it. I look forward to making a kid roll their eyes in exasperation because I’m eating leftovers in a full Stormtrooper suit. Or pulling out all of the movies and insisting we watch them all, canonically.