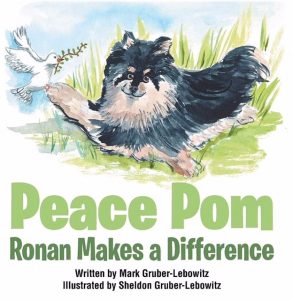 Makes a Difference the second book in the series by Mark Gruber-Lebowitz (and illustrated by his husband Sheldon Gruber-Lebowitz), is the story about a young Pomeranian dog who is hoping to tell everyone about peace – how we can feel it ourselves and how we can spread it to those around us. The children’s book, for children of all ages, is a delightful tale that not only educates but touches readers’ souls. Baltimore OUTloud recently sat down with the book’s creators.

For Mark, a retired elementary school teacher, administrator, and curriculum specialist, a chance interview years ago brought art educator Sheldon into his life. “I was interviewing in the summer for a teaching position at a school in Catonsville,” Mark began. “Sheldon was teaching art at this school. During the interview I was asked about my teaching style, and I told them about all the extra things that I did in my classroom. I found that they were looking at me with these strange smiles on their faces. One interviewer then said to the other, ‘He’s like a tall Sheldon.’ And they said, ‘When you leave here, we’ll send you with our staff member’s phone number, so you guys can connect over the summer. We think you guys would be good friends. That was 29 years ago. We’ve been together as a couple ever since, and legally married since 2009.”

Growing up in Baltimore, faith played an important role in Mark’s early life. “I grew up in Baltimore, and my dad was a Methodist minister. He was the pastor of a church near the Baltimore City / County line.” Mark added, “As a preacher’s kid, faith was central to my life from my childhood days. After I discovered my passion for peace and justice in my early teens, I came to see how closely tied my understanding of Christ was to my sense of being called to follow a path of nonviolence and social activism. Today, at age 61, I still look to my faith as my life’s cornerstone and guiding force.”

For Sheldon, who grew up in Randallstown, Maryland, his progressive Christian faith continues to inspire and guide all he does each day. “I was born and raised Jewish but converted 27 years ago – after having met Mark. It’s the backbone of everything I do – from my teaching, as a calling, to the extra things outside the classroom like the service clubs and extracurricular activities I run. For me, faith is the root of why I do what I do in my professional, as well as my personal, life.”

Inspired by their faith, as well as their love for their dog Ronan, Mark and Sheldon decided to write a children’s book about him. Mark explained, “Our first book, One Lucky Pom: The Adventures of Ronan and His Dads, was about him and us living together.” The inspiration for their recent book, however, took a bit more of a socio-political spin. Mark added, “I’ve been a political justice activist since I was 15 years old. So, I could have been inspired to write to these themes at any point in my life, but I would be wrong if I said the current political climate didn’t make it seem like the perfect time for this book.”

In this second book of the series, Ronan the Pomeranian presents a description of peace in its many forms, offering strategies that will make this a more peaceful and just world. Ronan encourages that we must first find our peace, deep within ourselves, through whatever brings peace to our souls. Then, there are simple acts of friendship and loyalty, sharing our gifts, offering comfort and kindness to those who are hurting, and standing up against bullies. Ronan talks about how we can celebrate diversity, welcome immigrants who are new to the country, care for our endangered planet, and embrace nonviolent conflict resolution. All of us, big and little, can be makers of peace in many ways.

Mark explained, “From the beginning, our goal with these books has been to entertain as all children’s books should. In One Lucky Pom: The Adventures of Ronan and His Dads, we wanted to have young readers have fun and see how Ronan’s life goes with his dads. We didn’t ‘bang the drum’ that Ronan has two dads, but they were just there, and it was a simpler presentation.” Mark continued, “In Peace Pom: Ronan Makes a Difference, our intent was far more intense. We have jokingly noted that in some ways this is our ‘sweetly subversive children’s book.’ Nothing subversive that we have something to hide, but it’s sad that we are telling kids that they can be peacekeepers and peace-wagers and telling them they can make a difference by welcoming others from other places and to go marching peacefully with their grown-ups, but now that’s considered to be a scary and subversive thing by some people’s point of view. So, I think our goal is to stay sweetly subversive as long as there is an audience and a pressing need, and in our opinion, there is a pressing need in our society right now.”