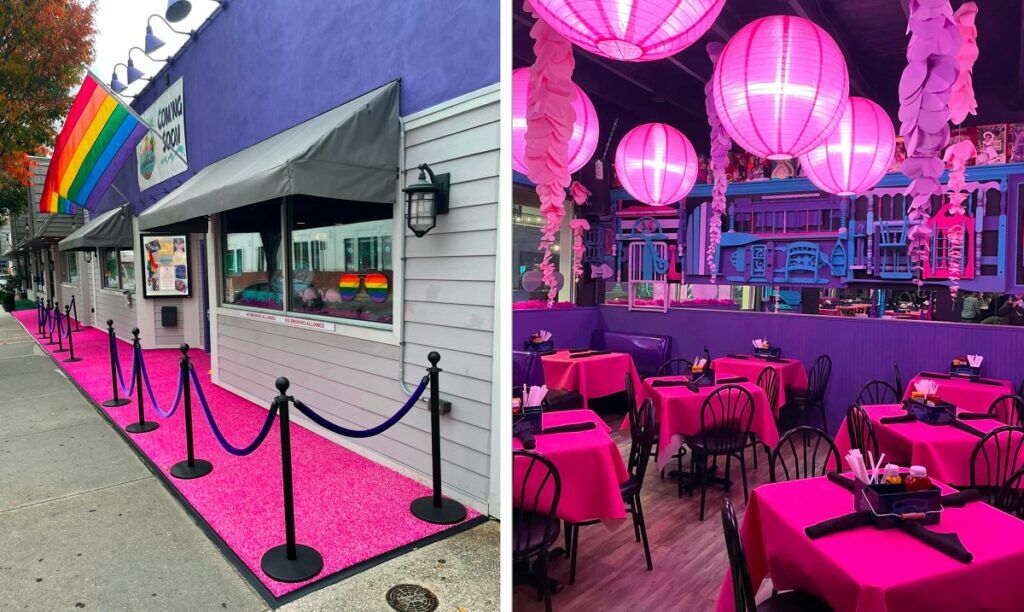 Rehoboth Beach, DE – David Hudson reports for Queerty that a beloved gay bar and restaurant in Arlington, Virginia has just expanded its operations into Rehoboth Beach, Delaware. Freddie’s Beach Bar, owned by Freddie Lutz, first opened in Arlington in 2001. It’s that area’s only LGBTQ hangout. The business has just launched its second venue, with Freddie’s Beach Bar finally finding itself a true beachside location a block from the Rehoboth Beach boardwalk. The second site is located at 3 South First Street, the premises formerly occupied by The Pond Bar and Grill.

Freddie’s Beach Bar in Arlington is known for its camp and kitsch interior, with lots of pink and purple fittings, including plastic flamingos and Barbie dolls. “The concept really grew out of a small travel trailer that I had in Sea Air Village, which is in Rehoboth,” Lutz told the Cape Gazette. “I built a little courtyard out back, and I had a tiki bar out there with lights and an ice machine and a service bar. “And then I had junk on the walls, like in both Freddie’s locations, and it was the same colors and hot pink furniture [inside]. “Twenty years later, sitting in Freddie’s in Crystal City, I thought, ‘What is this beach missing? I know, the ocean and sand.’ So here I am back in Rehoboth with that concept.”

Lutz says he would like to have opened the new bar sooner. However, getting approval for all the relevant permits took longer than expected. “I waited eight months on permits, which was kind of a grueling process over the summer. But I think it all turned out for the better because this is really the ideal time to open. It gives us the whole winter to tweak things and make everything more perfect by spring and the start of beach season.” In Arlington, Freddie’s Beach Bar has regular entertainment, with trivia nights and drag bingo, among other attractions. Lutz is hoping to bring the same events to Rehoboth Beach as soon as he has permission to do so. Until that time, they can host karaoke but without a stage. When asked by GayCities what makes Freddie’s Beach Bar such a special place, he highlights the impossible-to-miss decor. “We’re very colorful and flamboyant, and it’s just a fun atmosphere. I think the minute you walk through the door you can tell it’s going to be all about fun.” Rehoboth Beach—dubbed the Key West of the Mid-Atlantic—is a popular getaway town for those living in DC, Philadelphia, and Baltimore. It’s got many LGBTQ-run businesses. (Queerty – David Hudson at https://www.gaycities.com/outthere/56669/rehoboth-beach-delaware-just-got-even-gayer-thanks-new-bar/)