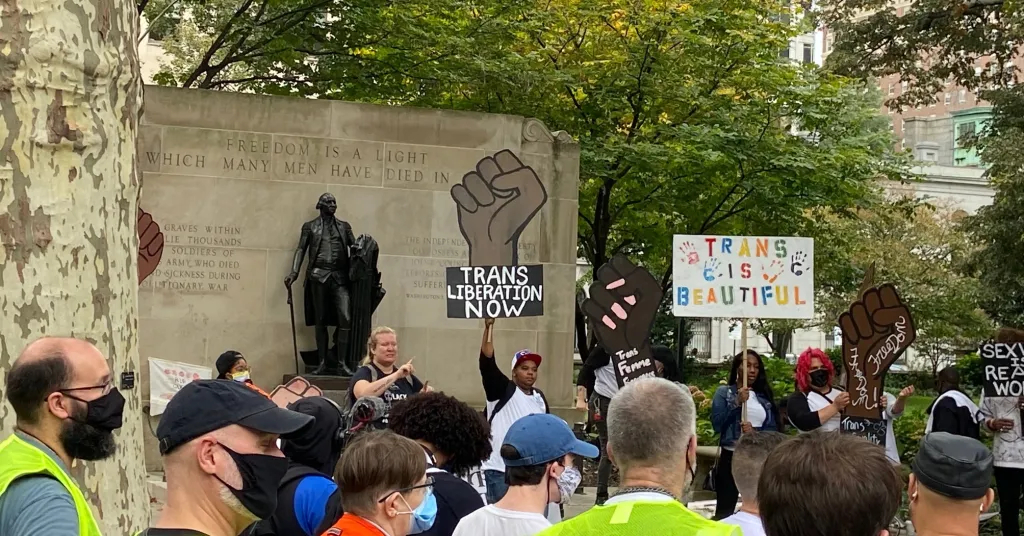 Philadelphia, PA – In the continued fight for transgender rights, roughly 200 people showed up to the annual Philly Trans March (PTM), the peaceful rally demanding justice, liberation, equity and safety for Philadelphia’s trans community, especially for queer and trans, Black and indigenous people of color (QTBIPOC). Trans activist of color Christian A’Xavier Lovehall founded PTM in 2011. Organizers and supporters assembled October 9 in Washington Square Park and wound their way around the Society Hill neighborhood, chanting in choral call and response and stopping at various intervals to have trans and nonbinary individuals address the crowd.

PTM organizer Bri Golphin told the crowd that a diverse group of people organized this year’s march, including trans and nonbinary Black, Brown and indigenous people of color and those who are disabled. As is custom every year, they also read out a list of demands that PTM organizers make of city leadership, nonprofit and business leadership and the white, cisgender citizens of Philadelphia. Those demands include, “the abolition of prisons and the police; protections for people impacted by the ever-growing rates of deportation, policing, separation from their family and detention while seeking home, haven and asylum; investment in transformative justice infrastructures, including participatory defense, Black trans-centered housing and healthcare, as well as various forms of harm reduction, i.e., safe injection sites.” PTM organizers demanded a stop to harassment, assault and murders that trans people constantly face. “The rates that [trans people] are being murdered is despicable,” Golphin told the crowd. “Especially because we have all these corporations, all these nonprofits that claim that they support Black and Brown trans people. Where are they when we need defense?” Further demands include economic justice, specifically the need to hire more trans people and to make employment settings safe for trans people; the development of Black trans leadership and remuneration in organizations fighting for social change; safety and affirmation for trans students; and protection of and more substantial support for trans elders. Reparations for Black and indigenous trans people was part of the list of demands. “Black and indigenous folks are survivors of white supremacy and colonization here in the United States. While white folks may claim we have come a long way since the times of slavery and colonization, Black and indigenous folks are still dealing with the everyday casualties that have stemmed from these traumatic times,” Golphin read as part of the written demands. Finally, organizers demanded the need for white people, including white trans people, to actively engage in anti-racism work. “We cannot demolish the ‘cis-tem’ if we’re not unified,” Golphin said at the march.

Golphin told PGN that they have seen some positive change for the local trans community. For one, no trans Philadelphians have been murdered in the past year. Golphin also cited reliable mutual aid initiatives for trans folks, the reclaiming of nonprofit leadership despite budget cuts, and deepened unity as wins for the Philly trans community since the last march. “I think that the pandemic and all that has happened has caused us to be closer than ever.” (Philadelphia Gay News – Michele Zipkin at https://epgn.com/2021/10/13/phillys-trans-community-and-allies-come-together-for-annual-trans-march/)