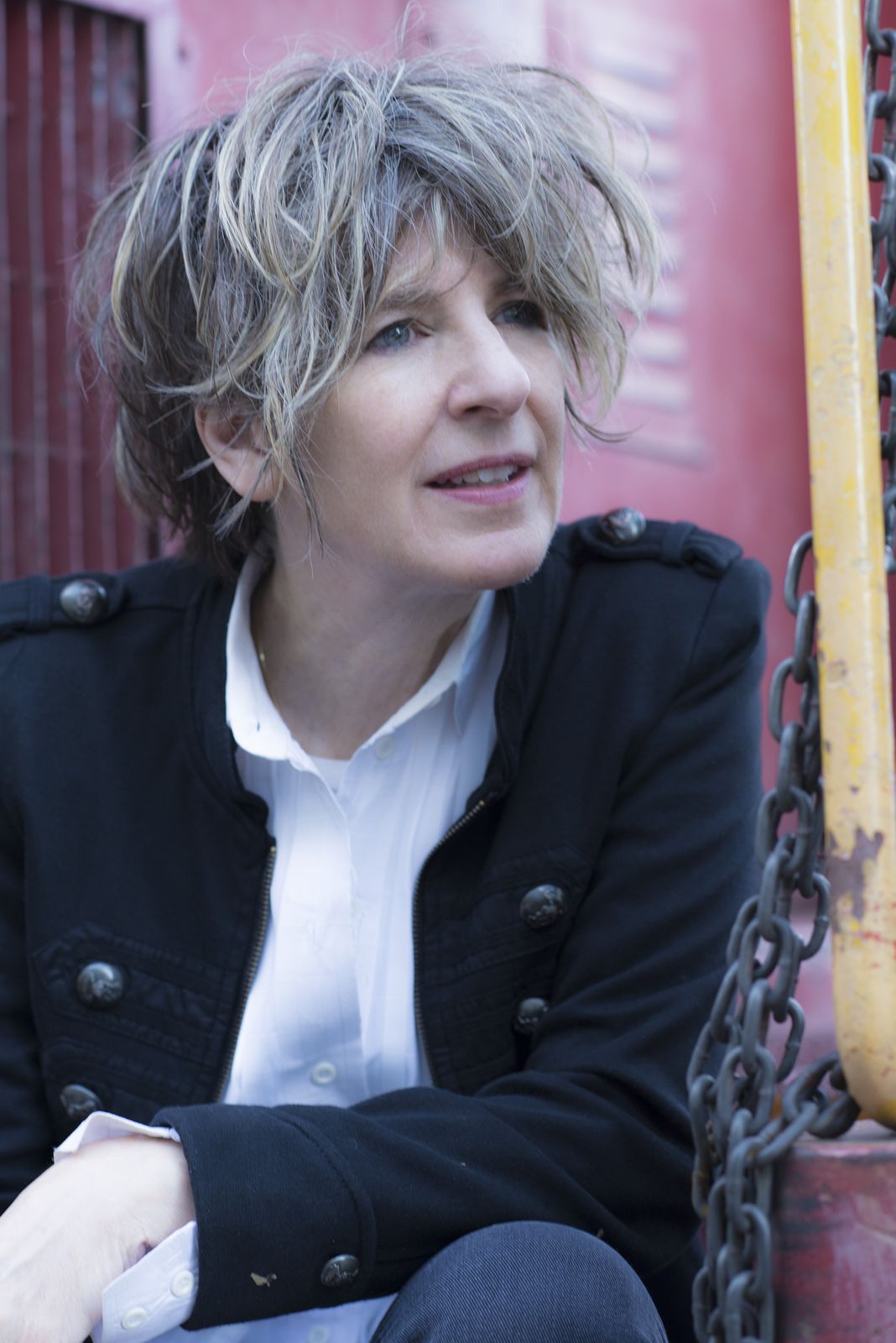 Baltimore native, out musician, activist, and even a bit of a mystic, Sonia Rutstein, better known to her fans and followers as SONiA of disappear fear, has a musical gift for everyone. The new 12-song CD compilation Love Out Loud (soniadisappearfear.com) collects some of her queerest and most uplifting songs resulting in the perfect soundtrack for your 2020 Pride observances. Drawing on selections spanning almost 25 years, including solo work as well as those recorded with her sister Cindy (from disappear fear’s early days), the album is as much a musical history lesson as it is a celebration of the LGBTQ+ community. SONiA was good enough to answer a few questions in advance of the release of “Love Out Loud.”

Gregg Shapiro: Because Love Out Loud is a journey into the past for you and the listener, I’d like to begin by asking you to say something about the genesis of the name disappear fear.

SONiA: I worked at the Baltimore Center for Victims of Sexual Assault right after college. They were looking for a new name for their center. I came up with disappear fear. They rejected that, but I had written it down on a Post-It on my desk. My band Exibit (sic) A imploded after (my sister) Cindy joined it. There was just me and Cindy, and this name disappear fear. I thought it was cool and we went with it. They went with SARC: Sexual Assault Recovery Center. disappear fear is applicable to when you are sexually assaulted, and you’re scared of everything, and how you want to regain your own sense of power. But then disappear fear was applicable to so many things in my life and that I wanted disappear fear to be.

GS: What can you tell the readers about the stylized spelling of your name as SONiA?

S: When I was five and learning how to write my name, that’s how I wrote it [laughs]. I love words and I love names and playing with them. My signature is backwards because I won a contest in second or third grade, writing your name backwards on top of your head. It was a good moment in my life [laughs]. That’s probably the seed of it and most people are more oblivious to that when they get older, but I’m not. I have PTSD on all kinds of levels [laughs], good and bad.

GS: By my calculations, Love Out Loud is your second compilation, with 2008’s Splash being the first. Why was now the right time to release a new compilation?

S: The Splash CD was because I was touring in a completely different market. We had so many CDs at the time, and I wanted something that was of quality and represented the magnitude of the genres that I do. From songs in Hebrew to Spanish to live performances with the band to solo stuff, as well as a couple of newly recorded things. This is who I am. This Love Out Loud compilation has been in the works since the beginning of disappear fear because that’s my mantra. That’s what I want my music to do. To touch people and realize that we’re connected. Love Out Loud celebrates the LGBT experience of my life. Those songs are the pinnacle song for disappear fear and for gay people moving through their lives.

S: Very hard; that was definitely the hardest part [laughs]. I was saying to Terry (my wife), is the next one going to be Love Out Louder or Love Out Loud Too? The evolution of the LGBT movement is monumental, it’s moved from “no, never” and “what is that?” to “cool!” and almost “so what” [laughs]. Which is awesome! I went through the torment of it and the celebration of it, and that’s the purpose of the CD.

GS: Love Out Loud opens with “Fix My Life” from disappear fear’s eponymous 1994 album. It includes a reference to HIV and “the boy next door/that Ron ignored and George abandoned”. More than 25 years later, did you ever think we’d once again be witnessing a Republican POTUS bungling the handling of another killer virus?

S: No, never. No, certainly not. I did not see this coming. As I’m want to do, for lack of a better cliché, I try to find the silver lining [laughs]. The earth is healing, the air is 30-40% cleaner. We’re seeing nature, which is nice, and also a building of community. There is some positive stuff, too. In Judaism, every seven years you don’t plant anything on the ground. This is the seventh year for that.

S: Exactly! Seven times seven is 49, and then you take the next year, which is 50, and all financial debts and burdens are forgiven. That will be in 2021. Isn’t that interesting?

S: I’m Jewish. I try to follow things like this. As I’ve aged, I’ve gotten even more into it. These parallels are so interesting to me, because it’s right where we are.

GS: The song “Who’s So Scared” features some lyrics by queer Harlem Renaissance poet Countee Cullen. Why did you incorporate his words into your song?

S: My girlfriend at the time was studying African American female authors at Howard University in DC. She had all these great books. Obviously, Countee Cullen is a male writer, and his book was one of the ones that she had. I love poetry and I opened the book and this poem jumped out at me. I read it and it had the word “Baltimore,” and I thought it was so profound. I had this idea of “Who’s So Scared” for a long time. For me, it’s about facing myself. I really thought when I first came out that I’d have to compromise my life and cut off people because they wouldn’t like me or respect me or love me anymore, which was not true, but I was scared about that. The idea of “who’s so scared” can be applied to when I have to make a big decision, I ask myself what I would do if I wasn’t scared. I usually get my dream answer and sometimes I follow through with it [laughs]. That’s a good day [big laugh].

GS: With Pride parades and festivals being canceled due to COVID-19 concerns, the Love Out Loud album functions as a kind of stay at home Pride observance.

GS: When did you attend your first Pride parade and what do you remember most about it?

S: I think I was 20 years old. I was in a band called Invasion of Privacy. I was not out yet. We got booked to play DC Pride because my manager was gay. He wanted to put this band together to play songs that he was writing. In fact, he wrote one for Norah Jones, but I don’t know if she ever recorded it. We did that festival and we were backstage with the drag queens who were easily twice my height (laughs) and gorgeous. It was so sensational in every way. It was amazing and colorful. I don’t think I was ever in a place where there was so much life! It was fantastic.

GS: Finally, Terry, who is your manager and your wife (married 12 years/together 23 years), is featured prominently in the Love out Loud album artwork. Would you please say something about what Terry means to you?

S: Yes! Terry is my world. She has her own history, her own legacy of participation in the gay movement. Starting with the successful move from gay being this fringe of society to it being a successful lighthouse of philosophy and financial influence. So few people know this; Terry should write a book. She took Atlanta’s Gay Pride (festival), which was $30k in debt, and only had a couple of drag queens performing for entertainment, and she felt like there was more to gay people than white boys on a dancefloor. The community’s a lot bigger than that. They said to her, “You’re so sure about this, why don’t you do it?” She said, “I’ll head this up, but you have to let me do whatever I want.” They did and what she was able to do was take it from what I described to the entire community being involved. You had drag queens, but you also had lesbian singer/songwriters and storytellers and political figures. She really opened it up. What happened was the (public) face of a gay person changed and she was able to get corporate sponsorship. The beer and alcohol companies had a huge audience with the gay community.

GS: Right, because the bars were some of the earliest social gathering places.

S: Exactly! That transformed it. That was in the early 1990s. Then she became the gay ambassador under (President) Clinton, as the face of that, and ended up producing the entertainment for 27 Prides in 1997 and that was the year we got together. It was an insane year! I was doing 10 Prides at which she booked me, and then another four or five that my booking agent arranged. It was wonderful! Things were starting to shift, it was making the earth move.