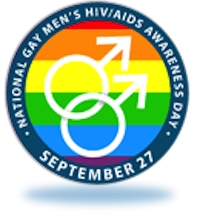 Get set for September 27th, as it’s National Gay Men’s HIV/AIDS Awareness Day, to recognize the disproportionate impact of HIV on gay men. It was launched in 2008 by the National Association of People with AIDS. Of all the men diagnosed with HIV each year, over half are gay and bisexual men. “Men who have sex with men” are the only major group for whom HIV infection rates are rising nationally.

The theme for this year’s event is “Be authentically you.” This year the University of Maryland School of Medicine, Division of Infectious Diseases, and the Institute of Human Virology will host an event for young gay men on September 27th at the GAY Lounge (518 North Charles Street, Baltimore). The event will provide young gay men an opportunity to paint their own picture celebrating the day. It will also provide an opportunity to recognize leading HIV specialists and others who have provided care and services for people living with HIV, in some cases going back to 1981.

The themed paint party for men 18 to 35 will be from 4 to 6 pm, followed by recognition and awards from 6 to 7, and finally a reception from 7 to 8 pm. Representatives of the Jacques Initiative will be present and available to discuss PrEP, meant to protect those who remain HIV-negative.

Special guest speaker will be Robert Johnson of AIDS United. He served as New York City’s “AIDS Czar” for eight years and also was a director of Gay Men’s Health Crisis.

A recent study by the Patient-Centered Outcomes Research Institute (PCORI) revealed that many young men in Baltimore who are HIV positive face harsh challenges daily, including unstable housing or homelessness, anti-LGBT violence, and early childhood trauma that make them at risk for depression and episodic employment. We want to remind everyone that HIV disease remains an illness to be avoided and to honor those who live full lives with HIV.