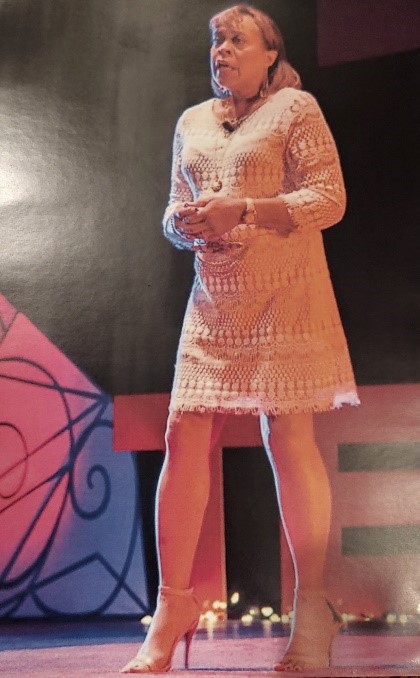 It all started one evening on November 2nd, 2017 while volunteering at the Gender Conference East in New Jersey. At our staff dinner, that evening I was sitting next to a gentleman named Jean. While talking with Jean he asked me if I have ever done a TEDx Talk before. He suggested I pursue one at Asbury Park, New Jersey, with the next theme on “Passion.” He then texted a gentleman with TEDx Asbury Park.

Later, I was in a session given by my surgeon Dr. Rachel Bluebond-Langner. I shared my surgical experience with the audience and expressed the gratitude I felt towards my surgeon. Afterwards, a man walked up to me and introduced himself as Eric Wiener and asked if I was Karen Holmes. I said yes, and he told me he was sitting behind me in the Dr. Bluebond-Langner session. He went on to say that I showed a lot of passion talking about my surgery and surgeon. He told me he was with TEDx Asbury Park and gave me his business card. He recommended I apply to TEDx for the next upcoming show on May 19th, 2018.

For a couple of weeks, I wondered if I could do the talk, and so I sent in my application on January 29th, 2018. Three weeks later I received an email telling me that TEDx Asbury Park wanted me to either come in to do a live audition or send in a video. I started working on my speech and rehearsing every day. So, for the next couple of weeks I worked diligently on my speech. My talk would be “40 Years and Wandering No More”. That evening like so many times before, when I got on stage, I changed my speech on the spot, and I felt like I knocked it out of the park.

A month later I received an email from TEDx Asbury Park that read, “Congratulation we want you to be on the Live Show on May 19th, 2018.” A week later, I got my first coach, and his name was Don. He loved my speech when I rehearsed it over Skype for him. Next, I rehearsed over Skype in front of eight coaches, two weeks before I was to go live on stage, I got a new coach named Joel. That night while rehearsing on Skype with Joel, he suggested I change my talk to speak about Tony (my birthname) first and then work in my talk about Karen. The next day Joel and I met on Skype again to rehearse and he told me that he was blown away with how well I changed my talk using his suggestions in just one day. After a couple of more rehearsals, Joel said he had me 95% ready and he wanted me to work with a woman name MK who would get me too 110% ready. She had a couple of suggestions about making Tony a little more personal.

I took off work in a couple of days and headed to Asbury Park for the dress rehearsal. I went to the Paramount Theatre to find out my dress rehearsal was not until 3 pm. Before heading back over I wanted to say a prayer, asking God for His help. At 3 I went on stage to do my dress rehearsal talk and once again, I knocked it out of the park! My first coach Don came backstage in tears, and I asked him not to cry because I would start crying too. I just wanted to be able to repeat my talk with the same passion for the live show.

Well the time finally came the next day, and it was my turn to do my talk. I walked out onto the red dot on stage, and not nervous at all – I was simply happy to get out there and get it over with. I spoke with such confidence and passion and I received several claps and laughs during my talk. My talk took ten minutes, and as I walked off the stage, there were tears and claps, with everyone standing. I gave a big sigh of relief and a long exhale as I went backstage.

You can find my talk when you Google my name. You can email me at kkholmes@kkholmes.com or visit my personal website at Kkholmes.com In my next article I’ll talk about “Will She Find It.” Until then, “Shoot for the moon and even if you miss, you’ll be among the stars!”