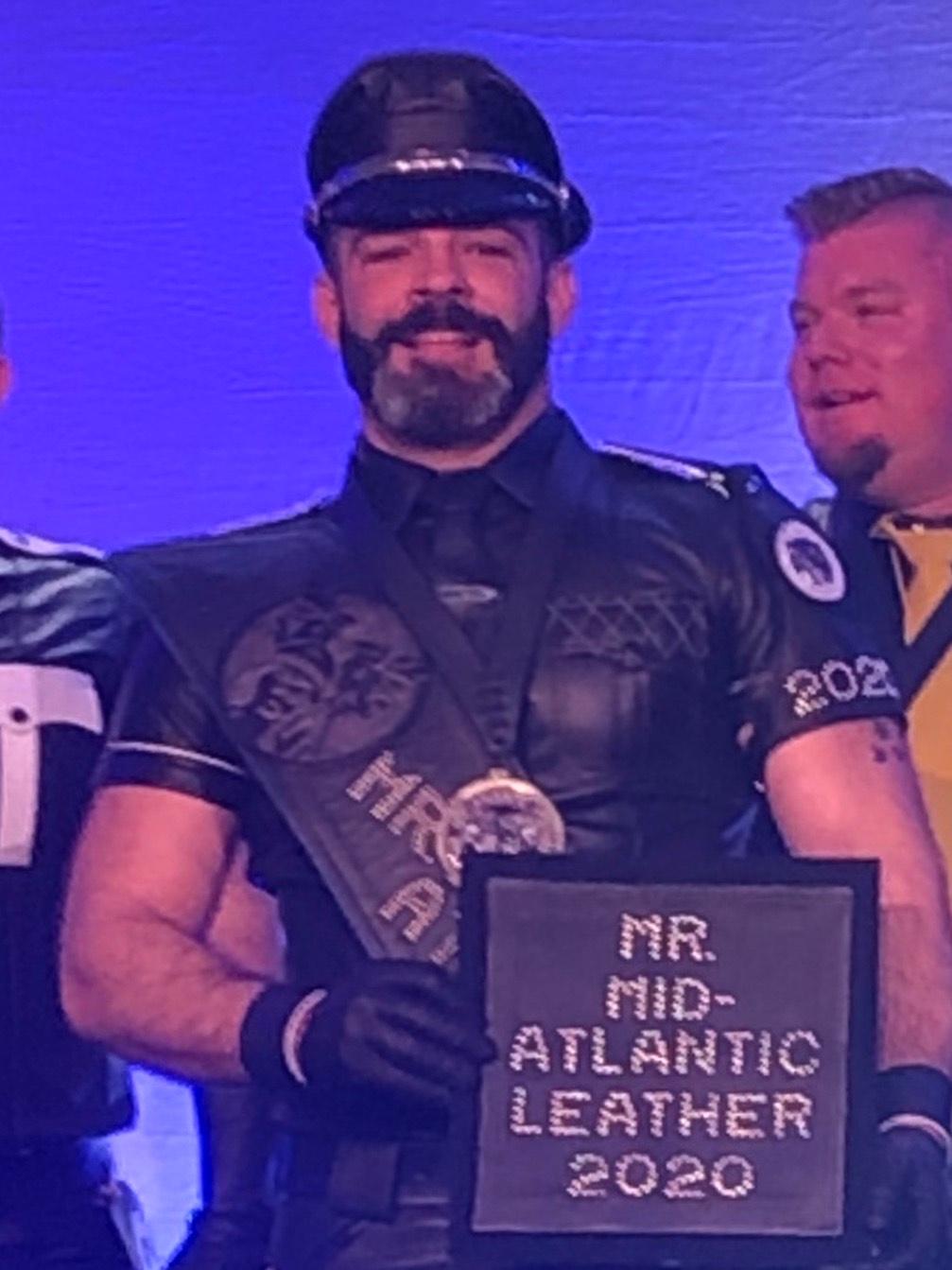 I always enjoying interviewing leather titleholders. We meet for lunch, dinner, or over drinks at a bar. A few have even come over to my home to be interviewed. Who wouldn’t thill at the opportunity to spend time with a charming and prominent member of the leather community?

In late January, Mr. Pittsburgh Leather Fetish 2020 David Spivey was sashed Mr. Mid-Atlantic Leather 2020 during the spectacular Mid-Atlantic Leather Weekend at the Hyatt Regency Capitol Hill in Washington. Having judged MAL the previous year, Sir Steve took a break from wintering in Florida and flew up to attend. We had a fantastic time. David was one of the first to hug and greet me when I arrived. I was thrilled when he was selected Mr. MAL 2020 and had no doubt that this very handsome leather man would have a great year.

Unfortunately, 2020 has not been a great year for anyone. It has been an extra tough year for David who went from the euphoria of having been awarded one of the biggest leather titles in the community, to “having the breaks put on his life” thanks to the restrictions of COVID-19. His year to shine has become the year of cancelations. On August 4th I got to spend time with this charismatic man. His muscles popped from his tank top and his smile lit up the room, but he wasn’t across the dinner table from me or with me at a bar. He was on my phone screen via FaceTime.

Born and raised on a farm in Wrens, Georgia (population 2,251), David is from a large blended family of 15 brothers and sisters.  When he was 19, he was living with his sister who had an AOL account. Like a scene right at of Love, Simon, his niece saw an email that he had written to another man and David’s sexuality became known. His mother struggled with this and for a long time couldn’t even bring herself to say the word “gay.” She would say, “Being how you are …” Luckily his mother had a close friend who had a gay son. She advised her, “Do you want to have a son or not?”  In January after David had been sashed Mr. Mid-Atlantic Leather 2020, his mother proudly joined him onstage for pictures.

His love of leather started with a pair of leather pants. He and his ex-husband hosted a charity event around Easter called Bunny Rampage during which a group of people would dress up as bunnies and bar hop. One year he bought a pair of leather pants and leather bunny ears and went as a leather rabbit. He found himself buying more leather. In 2017 he attended his first MAL and after a move to Pittsburgh for work, attended the Mr. Pittsburgh Leather Fetish Contest. He was asked to compete in the contest but was hesitant to do so because of his job at a college. In September of 2019 he was tired of sitting on the fence and took the plunge taking home the title of Mr. Pittsburgh Leather Fetish 2020. I could not resist asking him what his fetishes were. David replied that he is very attracted to men who have nice hands. He also likes flogging, rope, and flags yellow.

After the thrill of being sashed Mr. Mid-Atlantic Leather 2020 in January, the rest of David’s year has not been easy. Luckily his work has kept him busy as his job tries to navigate a changing world under the coronavirus. He has had little time to feel down about the cancelation of one leather event after another including the International Mr. Leather Contest in May where he would have been a contestant. He deals with stress by working out, taking hikes, gardening, and has an interest in pottery. His has been able to continue his work as a leather titleholder virtually and even hosted two online cooking classes as a benefit for Proud Haven, an organization that helps homeless LGBTQ+ youth. (See proudhaven.org for more information) He loves to cook and after the success of his first two events, he plans to host another one soon. Although he enjoys social media, he feels it can “be both a burden and a curse.” It can become overwhelming. There is so much negativity in the world. He advises everyone to “post happy things and be a light in your community.”

His advice for anyone who is interested in becoming a leather titleholder is to “first think long and hard about why you want to do it. What are you going to do with a title? Most importantly work to be a good person and represent your community well.” At this point the Mid-Atlantic Leather Weekend scheduled for January 2021 is very much up in the air. DC is not currently allowing large conventions. David says he would be proud and honored to carry his title another year. That works for me. If he is also Mr. Mid-Atlantic Leather 2021 maybe sometime next year I will get to have an in-person date with the very handsome Mr. Mid-Atlantic Leather!