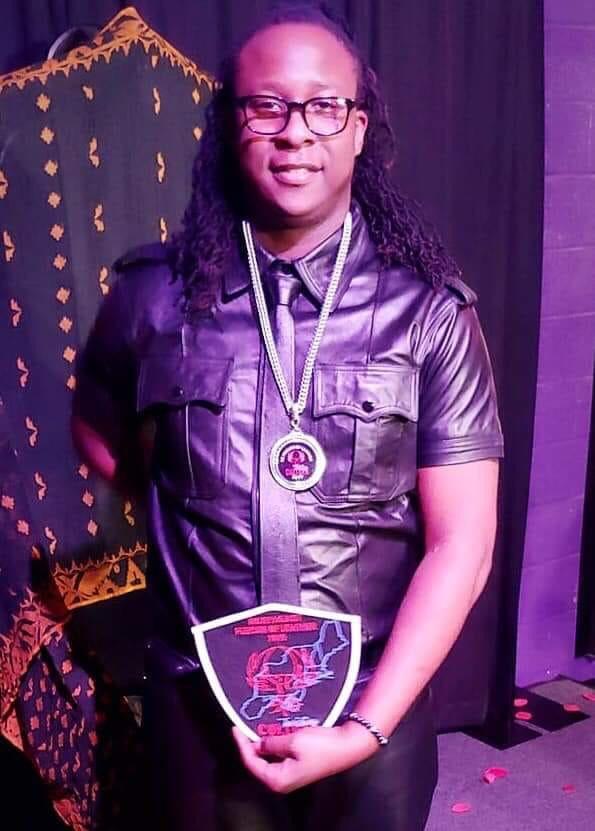 On February 28th, 2015 the first International Person of Leather Contest was held in Las Vegas, Nevada. It was a new type of leather title that was not only a community service title, but was also not limited by sex, gender, race, or any other labels. Additional feeder contests were developed and on March 30th, 2019 the first ever Northeast Person of Leather Contest was held in Baltimore produced by Twisting Culture. The Northeast region includes the Mid-Atlantic states, New England states, and Washington, DC. I was out of town on the weekend of the contest, but on June 10th I sat down with Northeast Person of Leather 2019, S’ango Onyx.

S’ango was born and raised in west Baltimore. He quickly added: “If you can survive in Baltimore you can survive anywhere.” (That could be the new city motto!) He grinned and explained that he started having good sex at age 18 when he met a guy who taught him a few things. When he was younger, he told a friend that he would never be into kink. Well, never say never. He now identifies as homosexual pansexual and has a female submissive. He became curious about leather and kink in 2014 when he walked into the Leather Underground, a fetish store in Baltimore. He wasn’t old enough to go to the bars and discovered the leather community on Facebook. He also read a book called A Night in the Barracks: Authentic Accounts of Sex in the Armed Forces, by Alex Buchman. He soon started to allow himself to have different experiences and feels that many people need help navigating the leather world.

In 2017 he joined ONYX Mid-Atlantic, a leather club for people of color. He is currently the club’s education chair. He explained that much like in a fraternity, your big brother gives you a name. That is how he came to be called S’ango Onyx. When he thought about running for a leather title, he selected the Northeast Person of Leather contest because the idea of the title being a gender nonconforming, non-binary lifestyle title appealed to him. He quickly added, “I’m a weirdo!” Contestants were scored as follows: leather lifestyle (100 points), interview with judges (200 points), speech (75 points), pop question (50 points), and onstage fantasy (75 points).

With his platform of education, S’ango plans to hold many instructional classes during his title year at the Baltimore Eagle. Subjects will include leather protocol and leather lifestyle and culture, and will include a panel discussion revolving around divisions and discrimination within the leather community. You can look for details to appear soon on the Baltimore Eagle website and Facebook page. In July he also plans to host a uniform dance party at the Baltimore Eagle with the funds going towards his travel fund. From January 31st to February 2nd, 2020 he will be representing this region at the International Person of Leather Contest in Las Vegas.

Since we were sitting down just two days after the Capitol Pride Parade in Washington, I had to ask what his reaction was to the false report of a shooting that resulted in the cancellation of the second half of the parade. Although my friends and I were there, too, we were not in the Dupont Circle area at the time of the mass stampede and panic. S’ango and several other current titleholders had just stepped off in the parade when the unfortunate situation occurred. S’ango explained that as his group entered the parade on P Street people started running towards him screaming, “They are shooting! They are shooting!” He recalled seeing a lady with a baby and heard something that sounded like fireworks. In front of his float was a school bus filled with children. People quickly removed the children from the bus to get them to safety. Folks on the DC Eagle float either hit the ground or jumped off and ran. Some called their love ones. S’ango stated that it was really scary and proclaimed, “We are not safe anywhere.” The event inspired him to perhaps also teach a self-defense and survival class.

I cannot be happier with the selection of S’ango Onyx as Northeast Person of Leather. Not only is he well-spoken and charming, he is excited to teach and share his experiences not only in the playful kink world but also provide assistance in the troubled world in which we now live. This man from Baltimore is a survivor.