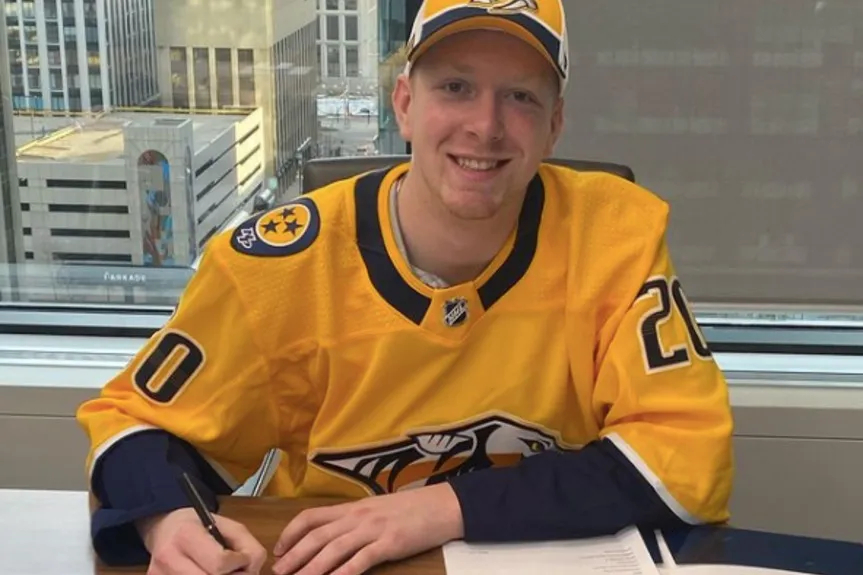 Nashville, TN – Canadian-native Luke Prokop became the first openly gay National Hockey League (NHL) player after posting about his sexual orientation via Instagram on July 19. At only nineteen years old, Prokop was chosen by the Nashville Predators during the 2020 NHL Entry Draft. Much like National Football League (NFL) defensive end Carl Nassib, Prokop chose to come out online by telling followers about his journey in the LGBTQ community and about the support that he has received from family, friends and agents.

“I hope that in sharing who I am I can help other people see that gay people are welcome in the hockey community as we work to make sure that hockey truly is for everyone,” Prokop’s Instagram post reads. Both the official Predators and NHL accounts commented, encouraging Prokop’s announcement. In an interview with ESPN, Prokop explained that he had told the Nashville Predators’ Assistant General Manager, Brian Poile, about his sexuality early on. After several failed attempts to connect with people on dating apps, Prokop decided that he would no longer deny his “true authentic self.” Around this time, he chose to tell Poile that he identified as a gay man. Prokop recalls crying at Poile’s words of support and acceptance.

Prokop is the first active NHL player to come out as gay, but he is not the first player in NHL history to ever come out. Meghan Duggan, ice hockey forward and American Olympic gold medalist, also identifies as gay. “The Nashville Predators organization is proud of Luke for the courage he is displaying in coming out today and we will support him unequivocally in the days, weeks and years to come as he continues to develop as a prospect,” Prokop’s team Tweeted. It should be no surprise that the NHL is reacting positively to Prokop’s social media post. The NHL partnered with LGBTQ organization You Can Play in 2013 in an effort to stand in solidarity with all queer athletes, coaches, fans and agents. During their Pride Night events, all 31 NHL teams have wrapped their hockey sticks in rainbow tape to demonstrate their devotion to being an ally. (Q Notes Online – Julianna Peres at https://goqnotes.com/78457/first-openly-gay-national-hockey-league-player-comes-out-via-instagram/)