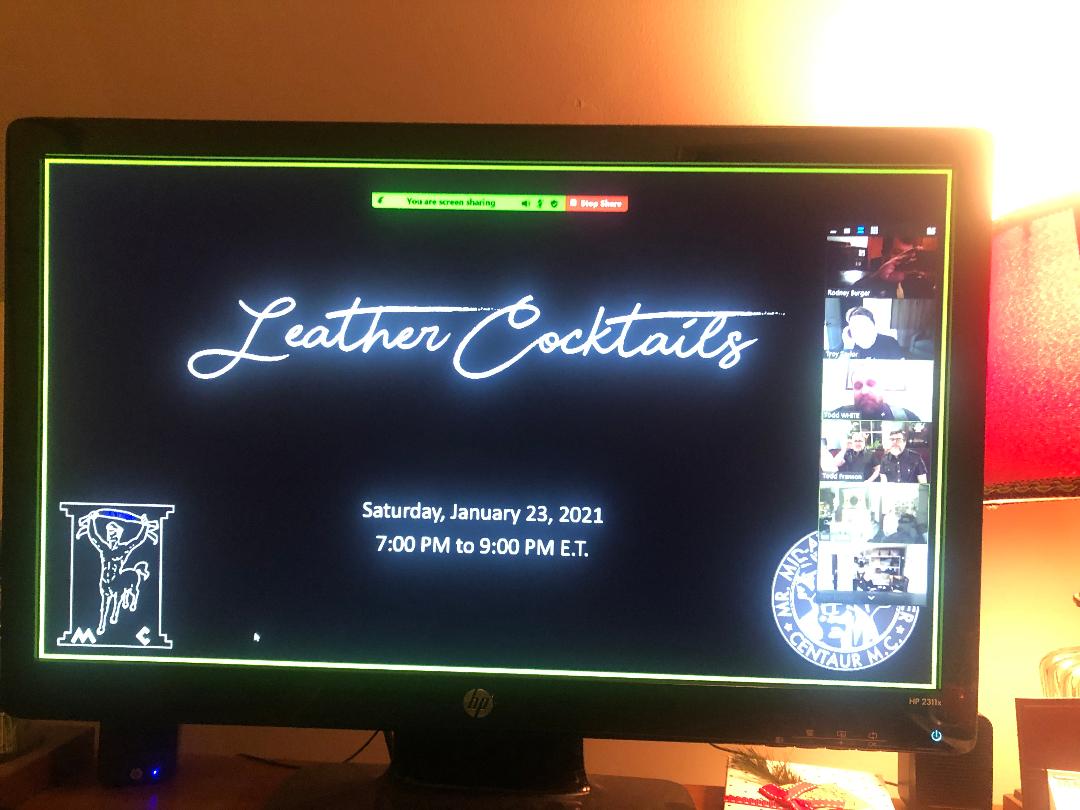 The new year has arrived but for most people not much has changed. Yesterday I thought that I really needed a break from isolating at home alone. It is hard for a social butterfly to return to the cocoon. I’m beginning to feel like that old hermit who is thrilled when the neighbor’s cat visits and who talks to the deer in the park. I needed to get out of the house, so I went to a nearby Starbucks. It was a brisk walk through the neighborhood, and I didn’t even mind the chilly winter wind. It made me feel alive. When I arrived at Starbucks, I was greeted by a sign on the door: No indoor seating, No outdoor seating, No bathrooms, Carryout Only. I went home.

Last weekend (January 22nd – 24th) I would have been far from alone. I would have been at a packed Hyatt Regency Capitol Hill for Mid-Atlantic Leather Weekend 2021 produced by the Centaur MC. When you enter the hotel lobby and descend the escalator into a sea of leather folk laughing and drinking, you leave your troubles outside. I am happy to report that on January 23rd the hotel started taking reservations for MAL 2022 to be held January 14th – 17th. The hotel has 880 rooms and although the event is a year away, the hotel sold-out in under 15 minutes crashing the website. I guess I’m not the only one who is tired of being home alone. Do not worry if you could not get a reservation at the host hotel. (I saw lots of frustrated Facebook posts.) There are several overflow hotels nearby. Go to leatherweekend.com for all the details.

Although I missed seeing the Centaur MC in person, I did get to see many of them via Zoom. I have known some of them for decades. On the Saturday evening that would have been the formal leather party “Leather Cocktails”, a virtual party was held. I must confess that for the last year I have complained that I’m not a fan of virtual events, however it was wonderful to see and talk to so many friends. Some were as far aware as California and even Ireland. At one point I counted 38 people online. At the close of the gathering there was a virtual parade of club colors on the screen, a beautiful remembrance to Centaur MC members who are no longer with us, and the tradition of dropping a cockring to signal that party was over continued. It lifted my spirts to see some of my leather family, if only on my computer screen.

One of the big words in 2020 was “postponed.” Followed by “canceled.” Again, not much has changed in 2021. The area’s other large leather event Bears, Bikers & Mayhem at the Eisenhower Hotel & Conference Center in Gettysburg, Pennsylvania is traditionally held in April. It was canceled in 2020 and in 2021 has been postponed until August 12th – 16th. Much like MAL, rooms at the host hotel went on sale recently and quickly sold out. There is secondary hotel that is just a seven-minute drive from the fun. One can also buy tickets ala carte for the various events. BB & M 2021 will be the 10th one and includes a large play space, leather vendor mart, puppy mosh, pool parties, naked bowling, bus or Segway tours of historic Gettysburg, financial seminars by Four Seasons Investment Management, cocktail parties, dances, the popular Mr. Mayhem Leather and Mr. Mayhem Leather Bear Contest, and much more. Visit bearsbikersandmayhem.com for tickets and details.

The biggest leather event of them all is International Mr. Leather / International Mr. Bootblack held each Memorial Day weekend in Chicago. It was canceled in 2020 and this year IML has been postponed to November 11th – 14th. Details are still in the works. Keep an eye on imrl.com for more information.

No information could be found for International Ms. Leather / International Ms. Bootblack traditionally held in the spring in California. It appears that a 2021 date has not yet been announced. Check back at imslbb.org for updates.

Here in Baltimore, the ShipMates hold their fundraiser “Daddy Christmas” on the first Saturday of December. It was postponed in 2020 and rescheduled for Saturday, February 13th at the Baltimore Eagle. With Baltimore’s current 25% capacity and one-hour time limit for patrons going to restaurants and bars, the ShipMates will be holding a virtual “Daddy Christmas” on February 13thstarting at 9 pm. Visit the Baltimore ShipMates Facebook page for a link to join the event. A raffle ticket will be pulled for a wagon of cheer with all proceeds going to the Brother Help Thyself Foundation.

While staying safe at home, I have been cleaning out drawers jammed with pictures, newspaper clippings, and programs from leather contests over the past 30 years. I’ve been spending lots of time thinking about all the fun I had in the past and looking at pictures of packed dance floors and filled venues. Hopefully, I can soon start dreaming of the future. For now, I wish I could just get a cup of coffee!