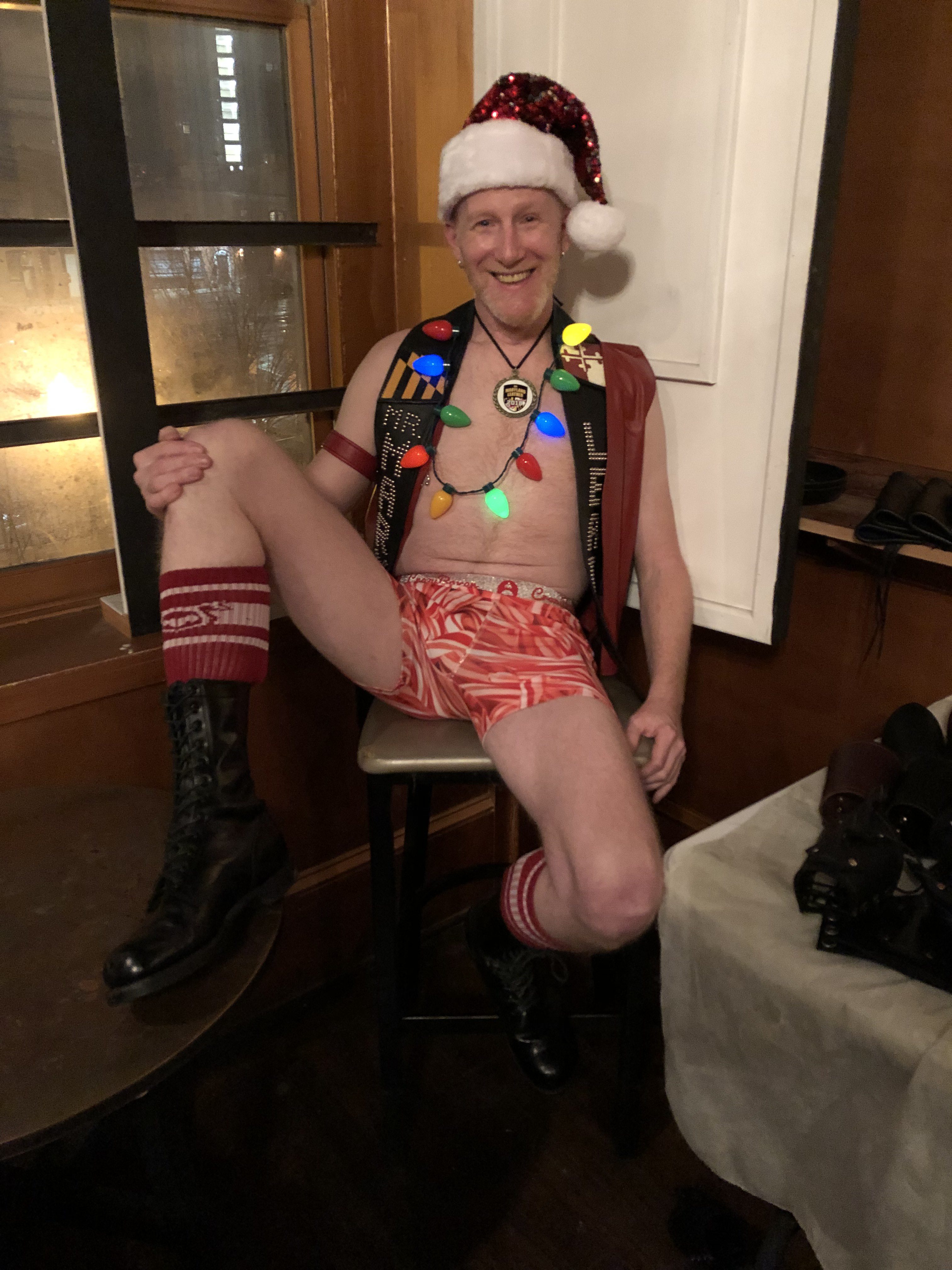 As it does every year the leather community celebrated the season of giving by giving back. The ShipMates Club of Baltimore hosted their annual Daddy Christmas fundraiser on the traditional first Saturday of December at The Loft at Grand Central. Since the first Saturday fell on December 1st this year, World AIDS Day, the club selected Adullum Community Healthcare Center – which, among other services, provides HIV screenings to low-income and underserved communities – as this year’s beneficiary. It was a wonderful way to start the holiday season as the ShipMates hosted what seemed more like a party than a fundraiser. There was a silent auction, a raffle for a wagon of cheer, and the ever-popular Jell-O shots. ShipMate secretary David Sugar offered his DJ skills and had the dance floor hopping all evening. In keeping with tradition, a current local leather titleholder played Santa and posed for pictures. Mr. Maryland Leather 2019 Scorpius Red was all too happy to help. New this year was the addition of Mrs. Santa Claus and I must say I really enjoyed having Stormy Vain who did an outstanding job in this role and who not only provided some additional entertainment but donated all her tips to the charity. It was also wonderful to see so many members of COMMAND MC, Centaur MC, Hooker and Boys, and other local leather clubs show up to support the ShipMates’ Daddy Christmas. The ShipMates Club will celebrate 45 years on May 4th and are already planning Daddy Christmas 2019.

A good leather titleholder always hosts at least one large fundraiser for charity during his or her title year. When Rik Newton-Treadway was Maryland Mr. Drummer 1999 he decided to put on a variety show at the Club Hippo that December and called it the “12 Days of Christmas.” It was to be a one-time event but was such a success that many asked Rik to put on the show again the following year. All these years later the Club Hippo is no more, but on Saturday, December 8th Rik along with Hooker and Boys hosted the 20th annual “12 Days of Christmas” at the Maritime Conference Center in Linthicum Heights, Maryland, just outside of Baltimore. Once again it was a huge success. The 2018 addition of “12 Days of Christmas” themed “It’s a Cosplay Kinda Christmas” was a benefit for AIDS Action Baltimore, the Baltimore Transgender Alliance, the Attic Youth Center, and Mary’s House for Older Adults, and was emceed by International Ms. Leather 2013 Sarha Shaubach, Mr. Maryland Leather 1999 David Allen, and Baltimore’s Queen of Comedy Shawnna Alexander. There were so many highlights during this marathon extravaganza that it is hard to know where to begin. This is always such a magical event that brings the leather community and the drag community together. There was an opening number by COMMAND MC, a dance celebrating “Where the Wild Things Are” by FIST, and a beautiful interprative dance by a very angelic and very pregnant International Ms. Leather 2016 Lascivious Jane to the haunting song “Hallelujah,” a number by Mid-Atlantic ONYX Pearls, as well as a performance by Ms. New Jersey Leather 2016 Christy Lee. It was also a big year for impersonations with Mr. Rowan Tree D Moj performing as Pee-wee Herman, Miss Charm City Triple Threat 2018-19 Brie Devine as Pink, Ms. Gay Maryland America 2018-19 Nicole James as Reba McEntire, Shawnna Alexandra as Gladys Knight, and the traditional Cher finale by Rik Newton-Treadway. Also performing were Laura Rice, King and Queen of Pride 2019 Bambi Galore, and Justin Sane, Robbie Alexander, D’Marje, Chi Chi Ray Colby, Rosie B’more (AKA Mr. Baltimore Eagle 1997), Anita Minnett, and many more.

The afternoon included a large silent auction and pictures with Santa Claus played by Butch Lee Norward of FIST and American Leathergirl 2006 Dawn Marie as a very sexy Mrs. Claus. It should also be noted that mama’s cherry bombs and cupcakes by Belton Moore raised a record $1,000 this year!

What can I say about a one-time event that is still going strong 20 years later? I’m always proud of my community, but on the second Saturday of December, I’m always extra proud.

The third weekend of December found Mrs. Santa Claus Dawn Marie working at the DC Eagle on Friday, December 14th with Mr. DC Eagle 2018 Daniel Ferguson as Santa as the Atlantic State Leather 2019 titleholders: Atlantic States Leather Boy 2019 boy kris and Atlantic States Community Bootblack 2019 Pup Ryder hosted their first bar night. December is a busy month for everyone, but it is even busier in the leather community when the leather community celebrates Christmas. I hope you have a safe and happy holiday. Maybe Santa will bring you something leather this year and the best part is that you don’t even have to be good.