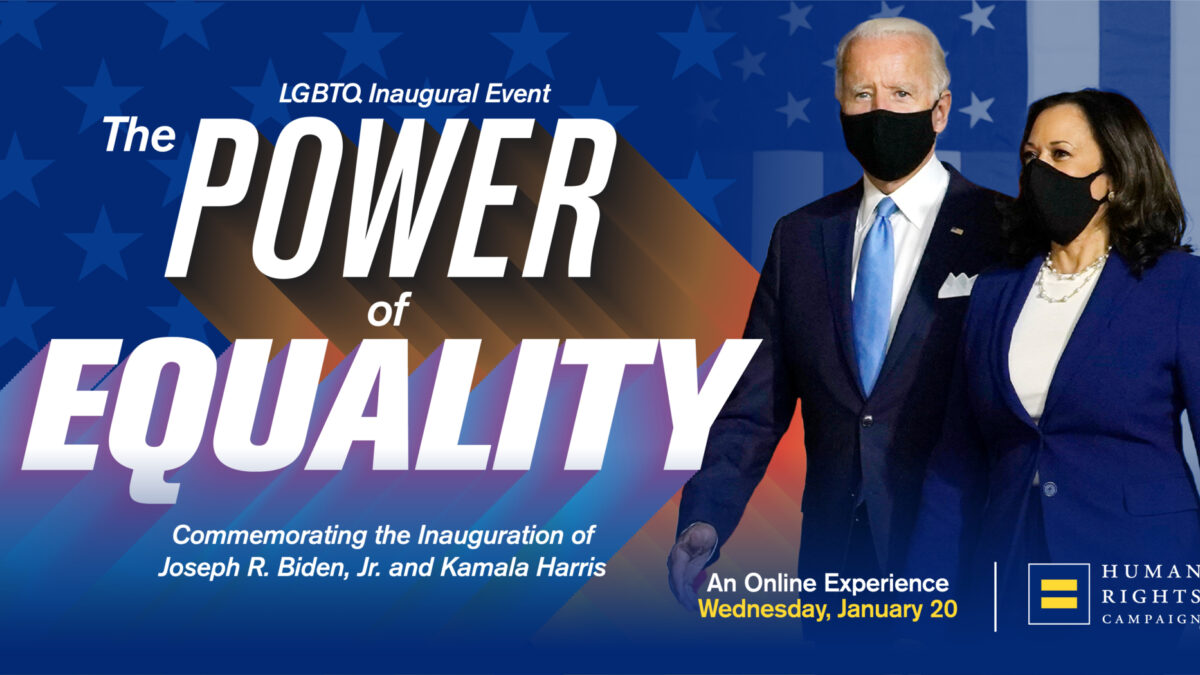 HRC President Alphonso David issued the following statement: “Today, after four years of fighting against government-sanctioned bias, discrimination, and the erosion of our democracy, the Human Rights Campaign is pleased to announce ‘The Power of Equality: the LGBTQ Inaugural Event,’ a premiere broadcast inaugural event to commemorate the historic election of Joe Biden and Kamala Harris. The event will democratize the inauguration experience by inviting our more than three million members and supporters to take part in this historic moment and break the traditional bubble of a Washington insider experience. Our nation is navigating one of the most critical and defining moments in our history. We will join together to not only celebrate the inauguration of President Joe Biden and Vice President Kamala Harris but also to support one another as we continue to process last week’s violent insurrection, ongoing and systemic racial injustice, the COVID-19 pandemic, and economic insecurity. We cannot let the past four years of hate and division define us. Rather, we must use this moment to define a new era of true inclusion for all.”

The online event is generously supported by Marriott and will be joined by our national LGBTQ political and policy community partners: The Center for Black Equity, the Equality Federation, Family Equality, Lambda Legal, the LGBTQ Victory Fund, LPAC, the National Black Justice Coalition, the National Center for Transgender Equality, the National LGBT Chamber of Commerce, the National LGBTQ Task Force, Out & Equal Workplace Advocates, PFLAG National, and SAGE. Since 1993, the LGBTQ community has commemorated the inauguration of the president and vice president of the United States four times: twice each for Clinton and Gore, [as well as] Obama and [now] Biden. In 1993, singer-songwriter Melissa Etheridge came out as lesbian at the Triangle Ball, a LGBTQ celebration of then-President Clinton’s inauguration. In January 2021, the LGBTQ community will continue the tradition with [this] online event [that people can] watch in their homes across the country. To register for the event, receive updates on specific timing, featured guests, and performers, please visit hrc.im/PowerOfEquality. (Seattle Gay News at http://www.sgn.org/sgnnews49_03/page18.cfm)