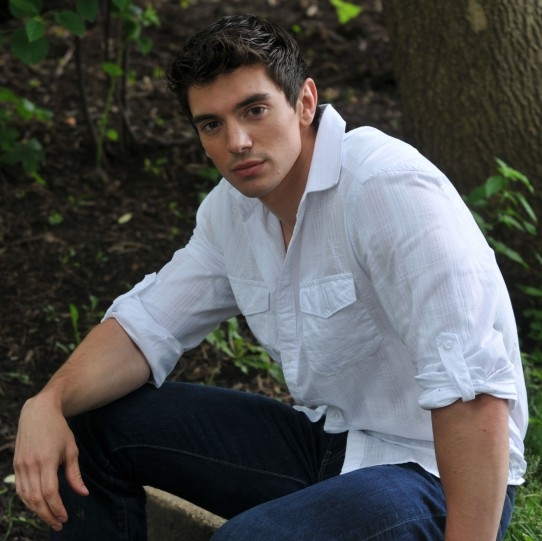 Coming in at number eight on Out Magazine’s Most Eligible Bachelors of 2015, gay singer/songwriter Steve Grand may be single but that doesn’t mean that there aren’t millions of men (and probably some women) who are in love with him. In return, Grand, who made his name singing about unrequited love in his hit single / YouTube video “All American Boy,” has unleashed a bounty of love on his fans (who helped him raise funds via a Kickstarter campaign) with the release of his long-awaited full-length album All American Boy (Stevegrand.com).

Not only did Grand wisely include his groundbreaking hit song, but he also used the tune’s title for his album’s moniker. More than just a pretty (stunning, really) face, Grand is the complete package (so to speak). He’s a talented pianist. He’s got a strong and stirring voice. He also writes catchy pop songs that are equally timeless and timely. For instance, Grand’s “trans brothers and sisters” get a shout-out on the stadium-sized anthem “We Are the Night.”

Grand brings a Midwestern rock sensibility to album opener “Say You Love Me,” as well as the vintage Mellencamp growl of “Red White and Blue” (one of two songs not written exclusively by Grand). The same can be said for the radio-friendly “Next To Me,” and “Run.” The (queer) country crowd that first embraced Grand with “All American Boy” is sure to get drunk on the intoxicating “Whiskey Crime.”

Grand even makes an impressive entrance into the realm of dance music with “Better Off,” a propulsive number that has summer club anthem written all over. It’s the kind of song you can imagine will pack the dance floor with fit, shirtless guys with just the right remix. On the flipside, Grand serves up “Back to California,” an emotion-packed power-ballad that is yet another examples of Grand’s towering versatility.

Gregg Shapiro: Steve, I first interviewed you in the summer of 2013, shortly after the video for your song “All American Boy” made you a YouTube sensation. You are now about to release your full-length debut album. Was it always your plan to include “All American Boy” and what does that song mean to you?

Steve Grand: That was always the plan. I mean, as far as I had a plan when I first released the song. I wrote it a year before I released it, in the summer of 2012. It was an important song to me because I felt like it was the song I had been trying to write the longest and I hadn’t been able to. I was trying to write a song that captured that feeling of longing and unrequited love that I was all too familiar with as a young gay person growing up in a rather conservative and sheltered town. It was an important song for me, personally. Also, it’s now taken on a whole new meaning and specialness for me just because what it’s meant to my fans. I know it’s hit a lot of them in a deep and moving way and we really connect over that song. That’s what made this relationship begin. It’s a very special song for that reason as well.

GS: “Better Off” is a dance-pop track that has the potential to become a club sensation. Did the song begin this way or did it evolve into a dance track?

SG: First of all, I don’t really think about the production when I’m writing a song; especially for that one. I remember very clearly writing that song. It was about the lyrics and capturing the feeling I was experiencing at the time. I wrote it very quickly – in 15 minutes, I think. I was staying with a friend and I pulled out my notebook after I got off the phone with someone that I really cared about. The conversation had turned ugly and I wrote it quickly. I went to make a demo of it, shortly thereafter. I think right away I went with a darker, dance-pop sound. When I first started thinking about production, that’s just naturally the shape that the song took.

GS: You make reference to Springsteen in the song “Whiskey Crime.” Where does Bruce fall in your musical influences?

SG: I go through different phases. When I was writing that song, he was probably my number one. Even if artists have been out there for a while, it doesn’t mean that I’m always completely aware of them or that I understand them. I guess as you grow up and mature and find yourself thinking differently in life, certain things speak to you more. At that time, for whatever reason, when I was writing “Whiskey Crime,” I was very much affected by Bruce Springsteen and his sound and what I saw him to represent.

GS: In “Whiskey Crime,” as well as in “Stay,” you make reference to a variety of adult beverages. What’s your poison?

SG: I just really like whiskey [laughs]. I find myself being a little more particular, but I’m not a snob about it. I like the taste of whiskey. It’s like a nostalgic feeling for me. It’s what I used to drink with my friends when I was younger. I associate that taste and smell with all the things I did when I was growing up and finding my way in my very early 20s. I’m 24 now and that wasn’t that long ago, but it’s still a nostalgic thing for me. [Laughs] I realize that might sound ridiculous as I say it. I haven’t been drinking that long, but your early 20s, when you’re still in college and getting out on your own, is a very special time for a lot of people. It’s a critical and fleeting time. It’s a time in a lot of people’s live that they look back on and regard as one of the highlights, being that age. Having freedom and being able to explore it is still new and exciting. I associate that taste with all of those things.

GS: So, if a liquor company approached you about using that song in an ad, is that something you would be open to?

SG: Yes, I would consider it. I haven’t thought about that a lot. I don’t know if I’d have a specific one in mind right off the bat. But I’d be open to it, for sure.

GS: You close the disc with the power ballad “Back to California.” To my ears, it sounds the most personal of the songs on the record.

SG: It’s definitely one of the most personal songs for me. It’s a song about friendship and the intensity of adolescent friendship, especially at the time when you’re still trying to figure out who you are and what you’re about. For me, I was dealing with the crisis of trying to come to terms with whether or not I was gay and if that was okay. It was an intense and critical time for me and it’s about the friendship I was having at the time. Even now, I really do think of it as one of the works that’s closest to me and the most personal. I know that a lot of people won’t hear it that way. It’s not a song I’ve expected a lot of people to understand. It’s just a song that’s mostly fulfilling for me personally and one I’m proud of as a songwriter.

GS: Because you have such a strong history with music videos, I would be remiss if I didn’t ask if there are music videos forthcoming for any of the songs on the new album.

SG: Yes, there definitely are. I’m actually working on a music video for “Time.” It’s not going to be a super-big production. At first, I didn’t even plan on doing a video for it. But my fans have been so patient with waiting on the record and it (the song) seems to have struck a chord with them and so I wanted to do something for it. There’s also going to be a video for “Whiskey Crime.” I’m excited about that [laughs].

GS: I recently interviewed Ty Herndon and Billy Gilman around the time of their decisions to come out as gay. Do you have any thoughts about Herndon and Gilman and what they did?

SG: Yeah, I think it’s great! I’m so happy for them. I personally know how it feels to finally make yourself free of worrying what the world is going think about who you really are. I can’t imagine going through life as long as they did and keeping that a secret; mostly for Ty Herndon. It makes me so happy and I really applaud them both. It makes me happy to see more and more people coming out in all industries. Even in the music industry, we’ve always looked at country as being conservative and a hard place to comeout. It shows that we really are making progress. I can imagine that they are having an effect on many lives, especially many young lives. I only think it’s a good thing I’m very happy for them.

GS: Do you have any interest in acting in film or on television and have you had any offers for roles?

SG: I do have an interest in that. It’s something I do want to get into eventually, but I’d first like to establish myself as an artist a little more. My album’s not even out yet and I have no idea what’s going to happen with it at this point. So, we’ll have to wait and see. I have gotten some offers here and there. For the longest time, I’ve been maintaining that I’m working on my album. There have been a few relatively small projects that I’ve been asked to be a part of or been considered for. I’ve played around with the idea. I’m just going to have to wait and see how it works out in terms of what happens with my album coming out and touring and being busy with that. That’s going to come first. But I would definitely like to act. I was in all the musicals in high school and I really enjoyed that. I love making music videos. I’m a very visual person. I love a good aesthetic and I love being a part of that whole thing. That’s what’s so cool about doing what I do. Adding the visual element to the music is one of my favorite things. It’s a great time for that now with YouTube being so important for the music industry.

GS: Do you think you might have a Broadway musical in you or if you were offered the chance to be in one that you would do it?

SG: I would definitely consider it. It wouldn’t be the first thing that would come to my mind or specifically seek out. I’m not sure that I would write a musical. I’m more likely to make an album or write a screenplay. For some reason, musicals don’t necessarily speak to me more than a regular film or play.