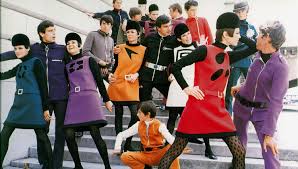 The filmmakers do a substantial job of illuminating the Italian-born Cardin’s life, incorporating a considerable amount of archival photos and film footage. Of all of Cardin’s multiple contributions to contemporary popular culture, it is his use of branding for which he may forever be remembered. The use of his signature, as well as his distinctive logo, on women’s and men’s fashions (Cardin also designed the Beatles’ famous suits) gave those who came after him the freedom to do the same. The power in his name and logo gave Cardin the opportunity for a massive amount of licensing on products such as cologne, eyewear, furniture, towels, decks of cards, an executive jet, and the interiors for early 1970s models of the AMC Javelin.

Because, as one interview subject says, “we don’t easily enter his intimacy,” there is more distance when it comes to Cardin’s personal life. Yet, when speaking about it, in the past and present, he’s unexpectedly forthcoming. For example, while talking about working as a costume maker on Jean Cocteau’s 1946 movie “Beauty and the Beast,” he mentions meeting other influential gay men from that time, such as designer Christian Bérard, actor Jean Marais, and filmmakers Luchino Visconti and Pier Paolo Pasolini, and how they all wanted to sleep with him because he was good looking. He also talks about his longtime lover (and co-designer), the late Andre Oliver, as well as actress Jeanne Moreau with whom Cardin had a lengthy romantic relationship.

Ebersole and Hughes make the most of their interview subjects including singer Dionne Warwick, actress Sharon Stone, models Naomi Campbell and Jenny Shimizu, musician Jean-Michel Jarre, rocker Alice Cooper, architect and designer Philippe Starck, journalist Amy Fine Collins, as well as a host of notables from the world of fashion such as Jean-Paul Gauthier and Kenzō Takada, to mention a few. Even if fashion is not at the top of your list of interests, there’s no denying that visionary risk-taker Pierre Cardin is a fascinating topic for a documentary. Try him on for size.

Bonus features on the collector’s edition include interview outtakes with Dionne Warwick, Sharon Stone, Jean-Paul Gauthier, Naomi Campbell and others, a Venice Film Festival interview, a handful of featurettes, as well as a CD containing the score from the original motion picture soundtrack. Rating: A-