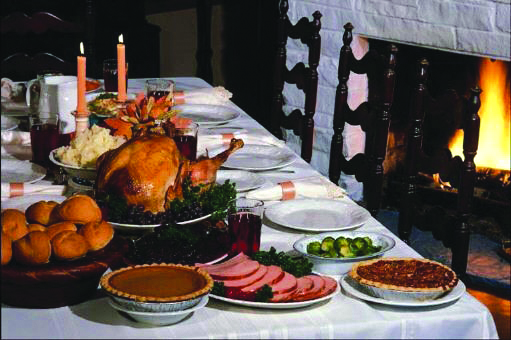 Thanksgiving is a weird holiday. We stopped getting together as an extended family before I was eight. Then until I was almost finished with high school, my parents, siblings, and occasionally my grandmother would go to Shoney’s for the buffet. My mother worked at Wal-Mart, and she obviously didn’t want to cook for a demanding family of varied tastes before being screamed at by customers who couldn’t find the TV or toy they “needed.” When I was home for Thanksgiving break from college, we went to Cracker Barrel as a family, and now as an adult, both my wife and I work jobs that keep us from having the day free to fill with turkey naps and pigskin snaps.

Don’t get me wrong, I will, and have, and will continue to make full-spread turkey dinners at random points during the year because nothing tastes better than a mouth stuffed to capacity with as many salty savory things plus cranberry sauce. The past two years, we have spent the day with my best friend’s family. They consider me another son, and my best friend has a love affair with gravy that I couldn’t begin to explain, plus, if I don’t have to cook or clean up everything, that is the best way to enjoy a feast by my standards. I just don’t have any special traditions or rules about the festivities themselves. As long as there is a plate of food for me at some point, I am a happy man.

Thanksgiving is about being thankful for what we have. And I have a plethora. I have three decades of memories of delicious meals past with a variety of people. I have loved ones, and friends and a career, a home, a future. I have things I never thought I would have before I transitioned. But what I am the most thankful for, is something that I find myself having pangs of guilt over. I am thankful I am here. I am thankful my name wasn’t read from a list on Wednesday.

I just walked away for a few minutes after typing that, because the guilt is real, and typing it out just made it so much bigger. I don’t feel guilty for being alive. I am glad to be alive, as someone who had a suicide routine, being alive is an absolute honor that I am forever grateful for. What I feel guilty about is every single name that was read this week is someone who doesn’t get to have turkey with their family, or friends, or wish vegan options were better than roasted cabbage or cauliflower. That those names aren’t people who died peacefully in their beds at the end of a life well spent, they are people who died in fear, and anguish, and terror. For existing. For doing nothing more than I do when I get dressed and leave my house to go to work, or visit a friend, or catch a movie, to exist in a public world because we all have that inalienable right.

While I’m sitting at the table of a family who’s welcomed me into their home, I will be thinking of those who don’t get that opportunity. Not just those who have lost their families for living their truths, but those who won’t ever get a chance to reconcile, or start their own. Each and every empty plate at every holiday meal, not by choice, but because of someone else’s senseless violence. Because their lives were snuffed out by the hatred that says I don’t deserve a right to be here. Because for every day that I get to wake up and go out into the world, I am failing those who fought for me to have that opportunity if I forget them, and what their lives, and the sacrifices of such, have given me.