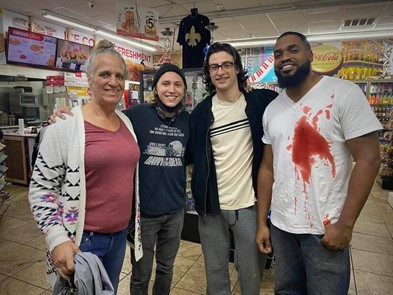 I have written a television series where the main charter transitions from male to female during the first and second season. The story is not about transitioning, it’s just the main character is transgender which complicates her journey just like it complicated my life. So, I decided to play a guy in another movie to a test whether I could do it for a year and a half in a series or not.

I wrote a post on my Facebook about this. Post: So, tomorrow night I am to play a guy in a movie. It will be the first time I wear guy clothes in 2 years. Should be an interesting night, call time midnight. Wonder if I will turn into a pumpkin? I guess this will tell me if I can do both sides of the coin. I do feel apprehensive already, almost like I’m going back into hiding. I guess time will tell.

I received lots of support from my friends, Facebook family, and fellow actors/fimmakers. My friend and fellow filmmaker Andi posted, you are amazing, and you are going to shine no matter what you do. My friend and fellow actress Natalija posted you’ll do great. Xx. My friend and acting teacher Dean posted, take a breath, and remember that doing away with gender all together you are the essence that embodies whatever you choose to be your beliefs at that time. One step at a time. Our inner monologues aren’t only powerful, but it is what feeds the mind. Love yourself no matter gender as gender disappears with meat bag of ours.  Love you my friend. Have fun, it is why we do this. My friend and fellow transwoman Kadie posted, Good luck hun! Remember it’s not worth it if it triggers your dysphoria! In all I had 45 messages of support and over 100 likes from my post.

I loved the support and it really does help. So here is how it went from my prospective. Two days before the shoot my emotions ran high, I questioned myself if I could really do this. The day of the shoot I didn’t feel any qualms. One of my safe places has always been movie sets. I always feel accepted on set and have been on several hundred of them over nearly twenty.

I decided to go to set as me. In the past I was fired from a project for being transgender but that’s a different story for another time. This time I didn’t care, I was looking after me. No one freaked out and everything went well. One of the crew came up to me after I was in guy mode and said sorry, I did recognize you with out your mask on. I think what she was saying way I did recognize you at first as a guy because I just meet you as a woman. Which made me feel good.

The transition from female to male wasn’t very hard. Guy clothes, compression shirt to bind my chest, and a low ponytail. When we started shooting everyone took me as male. However, as the night wore on. I could feel my anxiety started moving up. About halfway through shooting the directed said something where he referred to me as him. I corrected him by saying her. He immediately corrected himself and tried to use her for the rest of the shoot. I just love people under 30’s attitude towards pronouns.

Anyway, the shoot went very well. It’s the kind of atmosphere I love on set, the kind that really makes me feel at home.

However, towards the end of the night I started getting in my head. Which is not good, my inner voice started asking how can people accept you as female when you look so much like a guy? I realized it was my dysphoria kicking in. It was about to go into overdrive, and I knew it.

The ride home was horrible, second guessing everything about my transition. However, by the time I got home my mind had started to slow down. I think the hour drive was a venting of my thoughts. In the end I think I can do a series for a year and a half being back as a guy, but it will take a lot of work and I will need help. I haven’t seen my therapist since Covid started that will have to change because I can see lots of emotional minefields. But in the end, it is only playing a part, a part I played for fifty something years.

Well I wrote this Sunday morning however, Sunday afternoon I went out with my wife and during that time I started drinking and remembered thinking I want to get drunk. I hadn’t done that since I don’t know when, a very long time. I also started binging on ice cream later. I am an emotional eater. I drank seven or eight rum and diet cokes and was pretty wasted. And yes, the next morning I did not have a hangover, which is typical for me.

Will it be a big deal to do this role, I guess time will tell. I still want to do the role but will definitely have to have safeguards in place, so I don’t fall down that rabbit hole again. Anyway, as always peace, love and light. Sophie