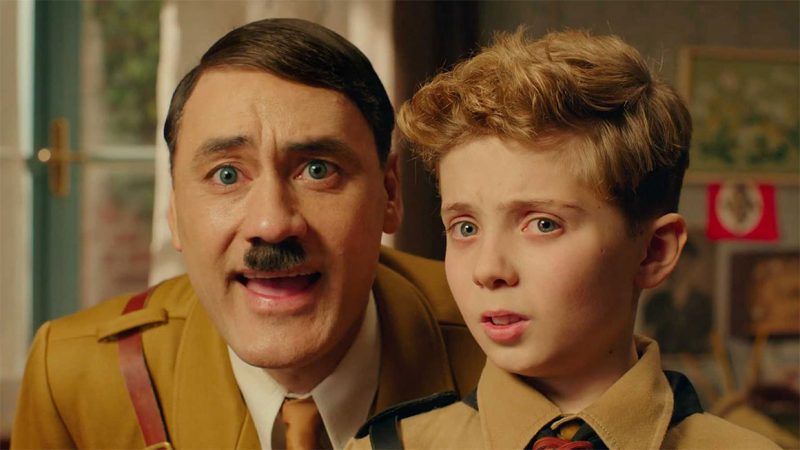 In its exaggerated irreverence, Waititi’s mind-bending film, about a Nazi youth’s imaginary friendship with Hitler, is both anti-hate and pro-peace. It’s an unabashed tribute to classic comedy geniuses that came before, including Mel Brooks (remember “Springtime For Hitler”?) and Monty Python.

“Jojo Rabbit” arrived in theaters, and now on home video, as neo-Nazism is on the rise worldwide. It’s a sharp poke in the ribs, alternately shockingly funny and heartbreakingly poignant. Not an easy feat, and one that 1997’s Oscar-winning “Life Is Beautiful”, to which “Jojo Rabbit” may be compared, did not accomplish.

Set in Germany, towards the end of World War II, where 10-year-old Johannes (Roman Griffin Davis in a memorable movie debut), aka Jojo, lives with his mother Rosie (Scarlett Johansson) while his father is away fighting on the front lines. On the day Jojo is to become a man by participating in Nazi youth camp he is given a pep talk by his imaginary best friend, Adolph Hitler (Waititi). Yes, you read that right. Hitler is presented as being as childlike as Jojo. That is until he starts spouting his hate-filled anti-Semitic rhetoric.

At the youth camp, where drunk (and gay!) Captain Klenzendorf (Sam Rockwell) is in charge of sculpting the next generation of young Nazis, Jojo mostly hangs out with his klutzy but lovable best friend Yorki (Archie Yates) during the various training exercises. Soon Jojo’s uneasiness is detected by a couple of the counselors and he is singled out. When he refuses to kill a rabbit, he is given the nickname of the movie’s title.

Arriving home before his mother one day, Jojo hears a noise coming from the bedroom that belonged to his dead older sister Inge. Upon investigation, he discovers that Elsa (Thomasin McKenzie), a Jewish friend of Inge’s, is being hidden by Rosie in a secret room behind a wall. As you can imagine, being young and impressionable, as well as being enrolled in Nazi day camp and having Hitler as your imaginary best friend, Jojo is presented with a quandary with which most children are not equipped to deal.

Fortunately, Jojo is not just any child, and he realizes the consequences of turning Elsa in to the gestapo. Nevertheless, we watch as Jojo struggles with the secret on a daily basis. It’s a burdensome secret as he also can’t let on to Rosie that he knows what she’s done. This leads to a variety of humorous, outrageous and painful sequences that are sure to elicit a multitude of responses from the audience.

As WWII movies go, nothing about “Jojo Rabbit” is like anything we’ve seen before, and that includes the relationship between Captain Klenzendorf and his devoted lover Finkel (Alfie Allen). There are surprising anachronistic details throughout the movie, such as The Beatles’ “I Wanna Hold Your Hand” – sung in German — playing over the opening credits, while David Bowie’s “Helden” (“Heroes” in German) closes out the movie — which adds to its cheekiness. Additionally, the language of the film, particularly in the interactions between Jojo and Hitler, is extremely modern. One thing is for certain, love it or hate it, you’ve never seen anything quite like “Jojo Rabbit”.