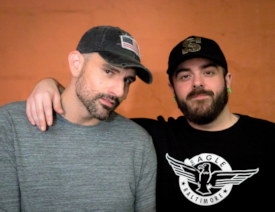 A small, local charity operation is about to make a big splash in Baltimore LGBT nightlife. This spring, D4AC (Dance for a Cause) kicks off its third annual fundraiser with a number of notable upgrades, including expansion to a three-day weekend event, robust entertainment lineup, and a more ambitious fundraising goal of $10,000 (proceeds go to Chase Brexton and Baltimore AIDS Walk & Run).

D4AC began as a modest passion project. Its founders, Aaron Lorance and Ryan Walter (aka DJ Ryan Doubleyou), never expected to grow so much so fast. And yet, as sponsorship and popularity continue to build, their faith in the compassion and generosity of the local LGBT community has turned out to be right on the money.

“One thing Ryan and I believed from the very beginning was that people really do want to help make a difference in the lives of people struggling with HIV/AIDS,” Lorance said. “As it turns out, we were right. The level of participation in these events, and the contributions we’ve been able to raise from both local business and individuals, is just astounding.”

The organization is run by Lorance, Walter, and a small handful of devoted friends on a strictly voluntary basis.

“We’re 100% non-profit,” Walter said. “We have no budget of our own. No office. We don’t even have business cards. D4AC succeeds because of two critical components: our passion, and the businesses and organizations who support us. And that’s how it should be.”

The abrupt closing of G*A*Y nightclub, and an unexpected calendar move for Cherry DC that caused D4AC to reschedule its event to avoid competing with the vastly larger Cherry, complicated the already mammoth task of organizing such a large production with so few hands.

The setbacks only strengthened their resolve. Lorance claims that, although his organization is small, it has quickly earned the trust of the community. That trust, he says, is the foundation of any successful fundraising apparatus.

“People need to know their donation is going where they think it’s going. By partnering with Chase Brexton and Baltimore AIDS Walk & Run, we can ensure transparency and accountability.”

This year’s event – “Incognito” – explores the theme of disguise, anonymity, and alter-egos. Lorance said the inspiration came from a reflection on LGBT history.

“We knew we wanted to do a masquerade, but we wanted it to be interesting, relevant, and meaningful.”

The answer, Lorance said, was in our shared history.

“My generation grew up in a very different world. HIV / AIDS was literally killing our community, and the media, our government – we had no representation. To the vast majority of Americans, we didn’t exist. We were shadows. In a sense, we had to wear masks in the world, to disguise who we were.

“And so, we gathered in the clubs, because that’s where we could be ourselves, bear our grief, find acceptance. That heritage is hard to look back on, but it’s important to remember what we’ve overcome. Our victories have made us strong. ‘Incognito’ celebrates our heritage and examines it through the lens of identity. It’ll be interesting to see how people interpret that.”

The event is a mashup of a masquerade ball, superhero cosplay, fetish-gear, and perhaps unsurprisingly, Madonna. The promo, Lorance says, is a throwback to early 90s Madonna, which saw the legendary gay icon at the height of her provocative powers.

“The Erotica album and Sex book,” Lorance said, “which inspired the ‘Incognito’ promo, really captured the historical and cultural moment we’re reflecting on. [Madonna] was one of a small handful of celebrities advocating for LGBT rights and HIV / AIDS awareness. Today, thankfully, there are many more.”

Bryan Castille is a writer and graphic designer living and working in St. Louis, Missouri.