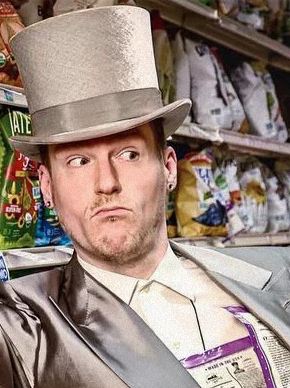 Charm City’s resident comedic jewel, Michael Furr, is celebrating the upcoming film release of his self-proclaimed “super gay stand-up comedy special” called “Straight Acting.” Available both on his website Michaelfurr.com and very soon to Amazon Prime, the hour long stand-up special is hilariously entertaining and will have audiences in stitches. Furr recently chatted with Baltimore OUTloud about the upcoming release, his material and his upcoming projects.

Frankie Kujawa: Michael, your new special is absolutely hysterical! From where do you draw your material?

Michael Furr: It’s all from personal experience. It’s all stories and conversations that I’ve had with friends, or a lot of it came from my boyfriend and I sitting around talking about stuff. I then write down an idea and try to work it into a set, where I can tell that same story, but highlight the funny part.

What inspired you to do a stand-up special?

ATB Productions recently did a comedy special last year on a friend of mine – Archie Jamieson. I watched him do this special, and was amazed how well the production crew handled it. I wanted to do the same thing. After talking with Archie, he had said he wanted to preserve his material forever through this special. I had been in this business for about three years, and I have a lot of material that I wasn’t going to use anymore, but I wanted to preserve it. So, I wanted to do an hour-long special about being a gay man, and especially being a gay comedian. So, I decided to call it ‘Straight Acting’ and make the whole special about being gay.

Could you tell our readers about the live performance?

It was filmed at the Wind-Up Space, who are awesome people to work with. I had a comedian friend of mine do my star chart and asked when would be a good time to do this special. She said March 15th was the perfect date, and that’s when we ended up filming the special.

How has this special helped your career as a comic?

Some great opportunities have come up for me as a writer, comic, director, and performer. Doing this special, as well as emceeing at the Baltimore Pride Parade, was great visibility for me. It was just a lovely day.

What are your upcoming projects?

I’ve already started writing my second hour-comedy special, and I’d like to do another one next year. I turn 40 next year, so it’s going to be a special about turning 40. I also just wrote, and will be directing a play – my first play – and filmed a few parts for some short films coming out soon. I’ll also be doing Artscape this year, which is amazing for Baltimore comedy.

For more information on how to download “Straight Acting,” as well as to see clips from the special, please visit Michael’s website: Michaelfurr.com