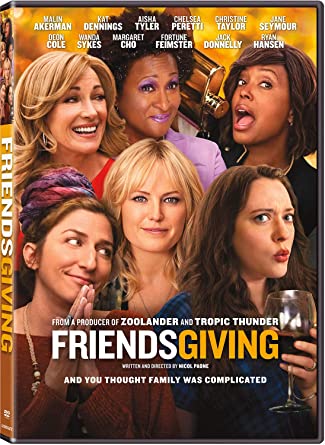 Halloween 2020 is behind us. However, for some people, especially LGBTQ+ folks, Thanksgiving can be much scarier. Friendsgiving (Saban Films), written and directed by Nicol Paone, renowned for her Elaine Stritch impression  on “The Big Gay Sketch Show” (where she costarred alongside Kate McKinnon), is the latest addition to the turkey day trauma tradition.
Queer Abby (Kat Dennings) and straight Molly (Malin Åkerman) are longtime besties with something in common. Each one is still reeling from a painful breakup. Due to their fragile states, they agreed to have a more intimate Thanksgiving – just the two of them and Molly’s infant son Eden.
Much to Abby’s chagrin, Molly has made changes to the plan. Actress Molly, who describes herself as a “prettiot”, has a hot new boyfriend of 17 days named Jeff (Jack Donnelly, who spends much of the movie in various states of undress) and has invited him to join them. A vulnerable phone conversation with Lauren (Aisha Tyler) leads to Molly inviting her, her husband Dan (Deon Cole) and their two kids. Lauren then proceeds to invite other people, including a trio of lesbians – Denim (Rhea Butcher), Palo (Scout Durwood) and Civil (Brianna Baker) – one of whom she hopes will make a connection with the closed-off Abby.
As if things couldn’t possibly get any more awful, Molly’s cold and self-absorbed mother Helen (an over the top Jane Seymour) arrives from Sweden to demonstrate her much-delayed and misplaced concern for her daughter. Making matters worse, Helen has invited Gunnar (Ryan Hansen), an actor ex-boyfriend of Molly’s to the festivities.
Every character is essentially a cardboard cutout. Shaman (or as Abby calls her “Shawoman”) Claire (Chelsea Peretti) is a walking punchline. Botox victim Brianne (Christine Taylor) is the ultimate caricature. Brianne’s obnoxious boyfriend Rick (Andrew Santino) embodies everything wrong with straight men. Gay Gus (Mike Rose) is an uncomfortable stereotype.
Then shrooms are introduced into the picture. A cheap gag if there ever was one, the psychedelics open the door for all sorts of kookiness and bad behavior. For example, Lauren and Abby end up making out in the bathroom only to be discovered by Lauren’s daughter Lily (Serenity Reign Brown) who then tells her father Dan. A tripping Abby is visited by three fairy gaymothers (played by queer comics Margaret Cho, Wanda Sykes and Fortune Feimster) who offer her words of wisdom. Unfortunately, Abby also makes the bad decision to feed Eden a slice of pie with pecans in it resulting in an allergic reaction and a trip to the emergency room. Harsh words are exchanged between Molly and Abby and, well, you can probably guess the rest.
To call Friendsgiving a disappointment is an understatement. Especially when you consider all the available talent that is wasted. You’d be better off watching the 1995 classic Home For The Holidays, directed by a pre-out Jodie Foster, with Robert Downey Jr. playing a gay character. Rating: D+