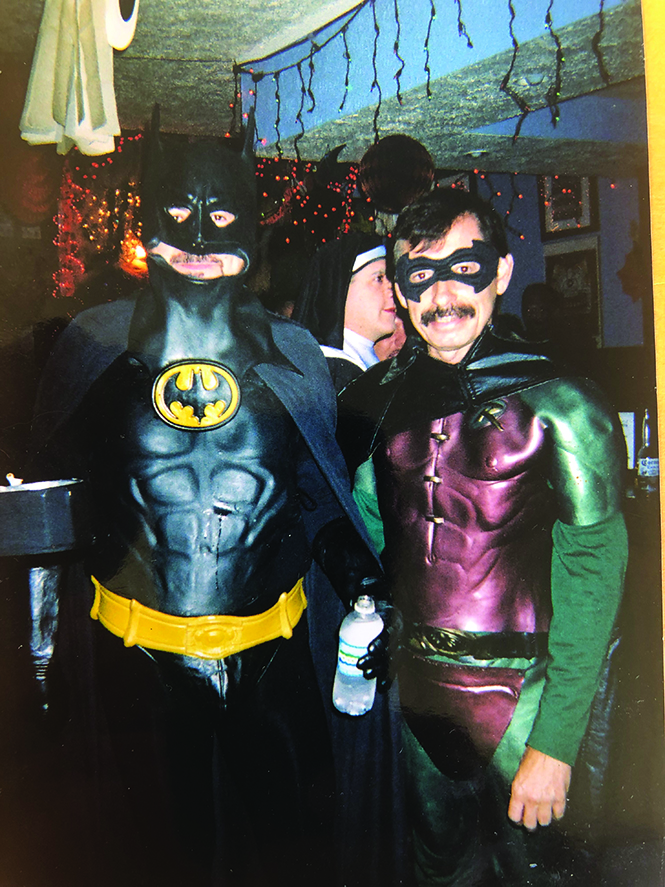 I’ve often been asked what keeps me going. Year after year I am working in the leather community, attending events and contests, and writing this column. Lord knows I am not getting any younger. Someone commented recently, “I don’t know how you do it.” The start of a new year often brings a time of reflection. My leather journey has been a long one and I hope that it is far from over.

Growing up in Hagerstown, I always knew I had a kinky side. Nothing would excite me more than when the villain in the movie would shout, “Tie him up!” I remember that my favorite television show as a child was the campy “Batman” which ran on ABC from 1966 to 1968. I didn’t want to be Batman – I liked Robin. In fact, Burt Ward was my first male crush. Not only did I like the spandex (I still do, by the way) but it seemed that Robin was always being captured and tied up.

Years later when I moved to Baltimore, I discovered the Galley Bar, which in the 1980s was a leather bar. I met members of the ShipMates leather club there and my partner and I would help them with events. In 1997 my partner and I broke up. I had been asked many times over the years to join the ShipMates, but I always declined. When you find yourself single again there are two things you can do. You can stay home with the drapes pulled and play sad music or you can get right back out there. In 1997 I took the plunge and joined a leather club. My objective was to meet more kinky people. Membership brought me oh so much more.

Those who stand on the outside looking in, as I did for so many years, are unaware of the true meaning of leather community. Joining a leather club opens many doors. I have met hundreds of leather folks from all over the world. In 2019 the ShipMates added ten new members and they are all fun to hang out with. I would not have met them otherwise. When I travel, even if I am not going to a leather event, I pack my club vest. I’ve walked into bars all over the country and have had strangers come up to me and say, “ShipMates, I know a ShipMate. Do you know …?” Attending other leather clubs’ events has not only introduced me to new people but has also taken me places: Fire Island, Dallas, Provincetown, Portland (Maine), and even Tulsa, Oklahoma. (Who goes to Tulsa? It’s fun. Who knew?)

After joining the ShipMates, I’ve held various officer positions in the club, including being the club’s president ten times. Over the years not only did I have lots of fun, I helped the club raise lots on money for many charities in the Mid-Atlantic area. Remember that Drummer magazine I was afraid to buy? In March of 2001 at a contest at the Hippo I was sashed Maryland Mr. Drummer 2001. As a leather titleholder even more doors opened. It was during my title year that I met Sir Steve when I sold him the winning 50 / 50 raffle ticket during the Mid-Atlantic Drummer 2001 contest. He won several hundred dollars. (I’ve managed to get the money back.) I’ve produced the Mr. and Ms. Baltimore Eagle Contest and the Maryland LeatherSIR / Leatherboy Contest. In 2005 I was asked by Baltimore OUTloud’s co-owner Jim Williams if I would be interested in writing a column in the newspaper. Knowing that I wanted to help spread the word about my beloved leather community, promote events, applaud leather people who are out in the community making a difference, and share my experiences, I quickly said, “YES!”

It is now 15 years later, and I am still here in the newspaper. I have not missed an issue. I’m still as active as ever with the ShipMates and Sir Steve and I are still together. One Halloween we even went out as Batman and Robin. Funny how life turns out. Occasionally, something magical happens. One year during Leather Cocktails at Mid-Atlantic Leather a young man came up to me. He introduced himself and said that he was one of my readers and that he had never been to MAL before. He said that I always write about how much fun I have at MAL, so he thought he would give it a try. He added that he was having a wonderful time and he thanked me. In that moment I knew why I did it.