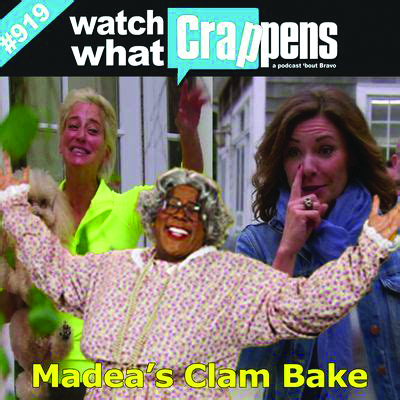 Katonah native Ben Mandelker is a funny guy. The Dartmouth College alum moved to Los Angeles a few years ago to be a comedy writer. He’s not the first and he won’t be the last. His is a familiar story of starts and stops, highs and lows. Fortunately for Mandelker, he met fellow funny man Ronnie Karam, and their shared affection for “The Real Housewives” and all things Bravo led them to create the popular podcast “Watch What Crappens.” The title of the podcast, a nod to Andy Cohen’s “Watch What Happens: Live” recap and call-in show, has been well-received, not only by the large listener base, but also by Cohen and Bravo show cast members alike. In fact, “Watch What Crappens” is so successful, that Mandelker and Karam have been doing a series of sold-out live shows. Mandelker, who also does the animated “The Real Housewares of Kitchen Island” series, took some time out of his busy production schedule to answer a few questions.

Gregg Shapiro: Ben, please say something about the genesis of the “Watch What Crappens” podcast.

Ben Mandelker: (“Watch What Crappens” co-host) Ronnie Karam and I knew each other from the world of blogging from the mid-aughts. We had forged a friendship from that. Around 2010 or 2011, I was hired to be the host of a web series called “Housewives Hoedown” where every week I would be on video talking about the “Real Housewives.” My role as host was to find guests to be on the show. I knew Ronnie and he’s super-funny. I invited him and my friend Matt Whitfield, who was a writer for Yahoo at the time. The three of us had great chemistry. When the web series was canceled after nine months, we decided that we wanted to keep talking about “Real Housewives” and expand it to included Bravo as a whole. We started “Watch What Crappens” seven and a half years ago.

A recent “Watch What Crappens” episode made mention of technical difficulties. Are you and Ronnie the ones doing the production work or do you have a team?

We do it all ourselves. We record over Skype. Even though we live about a mile away from each other. You can never underestimate how hard it is to drive places and find parking in Los Angeles [laughs]. We could theoretically meet up. We record five episodes a week, plus a bonus for Patreon, so it’s easier to record over Skype. One of the things that’s been really fun for us as a podcast is that’s it’s always been on us. We’ve always done it ourselves. Every now and then we’d get an opportunity to record in a nice studio setting. For years we’ve been this outsider podcast, just two guys talking trash about reality stars. It never sounded as sharp and crisp as a super-professionally made podcast, but I think it made it sound accessible. You can hear trucks driving by and sirens passing our apartments. At the end of the day, we’re still dudes putting together a recording for the fun of it.

At the beginning of each episode, you thank your Patreon supporters. How has crowd funding changed the creativity landscape?

Crowd funding in general, but specifically Patreon, was a total game-changer for us. I could even say it changed my life. I had moved out to Los Angeles to be a comedy writer. I had some success. I had a feature that I was going to do with director McG. I had a pitch a few years ago that Zach Braff was attached to, with the producers of “La La Land” and “New Girl.” Across the board, they would fall apart for some reason. What I realized is that the entertainment industry in LA is a crapshoot. The podcast was something that allowed us to take ownership of our future and our careers. Not have everything in the hands of fickle decisions. The reason this matters in terms of Patreon is that this is what I was going through at the time. My career was in the hands of other people. I was driving Uber to support myself while I was going on these pitches. When Patreon came around and people stared donating, a dollar, two dollars, five dollars here and there, after a few months Ronnie and I were actually able to live off of that. I didn’t have to be an Uber driver; he didn’t have to be a waiter. It allowed us to focus 100% on the podcast. That, in turn, empowered us to forge our own ways with our careers and not relying on other people to decide whether or not to give us an opportunity. It allowed us to create our own opportunities.

That’s quite an endorsement! Have you heard from Andy Cohen or any cast members of the Bravo shows?

A few months ago Andy Cohen actually Tweeted out something. He said that we were hilarious. We get a lot of support from Bravo celebrities, such as Lisa Rinna (“The Real Housewives of Beverly Hills”), LeeAnne Locken (“The Real Housewives of Dallas”), and a lot of people from “Vanderpump Rules,” “Below Deck,” and “Summer House,” among them, Patricia Altschul, who is the grand dame of “Southern Charm,” and Catherine Dennis, who is the breakout star from that show. A lot of them listen, support, come to our live shows, which is exciting. It’s awesome when we do a live show and one of the Bravo-lebrities shows up. They get the joke, they understand. At the end of the day, Ronnie and I are just two friends watching these shows and broadcasting the same thing everyone says to their friends when they watch the shows. We just happen to be broadcasting it to 2.5 million people.

I’m glad you mentioned the live shows. How did the concept of doing live versions of “Watch What Crappens” come about?

We had always wanted to incorporate a live component, going back to our first year. Truthfully, Ronnie and I are performers at heart. My background is a little more in writing. His is in theater and improv. Together, we are two people who live to make people laugh. If I make Ronnie laugh on the podcast, that’s all I’m trying to do [laughs]. If I can make him laugh, then the audience will be laughing. We have a desire to entertain. We love to get up in front of people and do our shows. Going back to our first year, we did a show at the (now defunct) Improv Olympic (in Los Angeles). Ten people showed up, but we had so much fun. Every once in a while we’d have a chance to do a show at The Improv and we’d have 60 people. Then we got the opportunity to do our show at the Gotham Comedy in New York and we sold out in six hours. It’s a room that holds 250 or 300. We did the show and it was exciting. A few days later, a big venue in LA reached out to us. We thought, “This might be happening!” Now we’re with APA, which is a huge honor, because they’re major in terms of comedy booking. It’s crazy to think we did a show where only ten people showed up and now we sold out the 9:30 Club in DC and Just For Laughs in Montreal and SXSW. It’s been so crazy, especially in the context that we’re just two guys talking about “The Real Housewives” and “Vanderpump Rules.”

I watched the first seven episodes of your animated series “The Real Housewares of Kitchen Island.” Are there more in the works?

Yes! Believe it or not, I’m going to sit down and work on the next scripts today. I’ve taken some time off and chilling out. I’m not going to lie. I was planning on getting one or two more up. I’ve actually outlined the next nine episodes. There’s going to be quite a scandalous arc that’s going to happen. I’m glad that you watched it. I love doing it. As I mentioned, I came out here to be a writer and since the podcast has become a big thing, I’ve focused a lot of attention on that. But I still want to keep writing as part of my life. The reason I do “The Real Housewares” is it’s a way for me to write quick, easy fun stuff on the side. It’s also my way of writing something, doing the voices. I taught myself animation so I could make it myself. It’s something that’s 100% my own.

Do you think Forky from Toy Story 4 might make a guest appearance?

You never know. I would love to have some crossovers. I’m sure Disney would absolutely allow that to happen. License their characters to appear on “The Real Housewares of Kitchen Island” [laughs].

Finally, Ben, can you please say a few words about the symbiotic relationship between gay men and the Bravo network?

There really is a connection between Bravo show and gay men. I think that there’s something about gay culture that really appreciates camp and a bent sense of humor. That’s the mindset you have to have when you watch these shows. You can’t watch “The Real Housewives of New York” and not appreciate the camp value. If you take it at face value, you’ll wonder, “What’s the point of this? Why is it funny for me to watch Ramona Singer walking her dog?” Instead of deriding that, embracing the ridiculousness of it is when you truly understand and get Bravo TV. You could probably have an entire academic course of study or thesis about why gay men respond to different kinds of humor in a certain way. There’s something about gay men’s appreciation of certain kinds of comedy that just dovetails so well with Bravo.