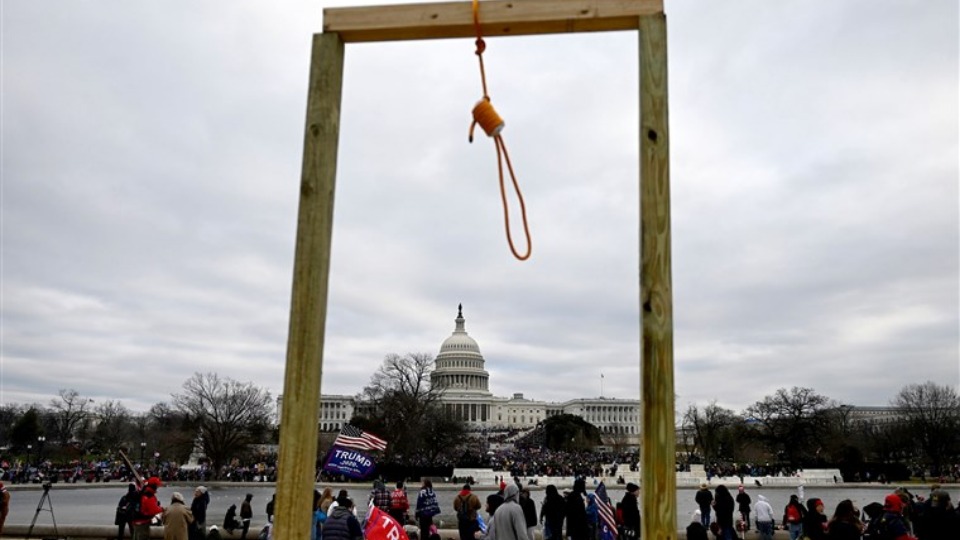 Washington, D.C. – Donald Trump isn’t willing to criticize any of his supporters, not even the ones who called for the death of his vice president, Mike Pence. In interview footage with ABC’s Jonathan Karl that was recorded in March but just released, Trump was asked about the Capitol insurrectionists who, on January 6, broke into the Capitol in an attempt to overturn the results of the 2020 presidential elections. The rioters looted the building as elected officials were whisked away by Capitol police and the Secret Service. And they constructed a makeshift noose and chanted “Hang Mike Pence,” since the former vice president was presiding over the largely ceremonial process of the Senate accepting all 50 states’ electoral votes.

“I thought he was well-protected,” Trump said about Pence that day. “I had heard he was in very good shape.” Karl pushed back, saying, “You heard those chants, that was terrible, I mean… they were saying ‘Hang Mike Pence.’” Trump said, “People were very angry because it’s common sense . . . It’s common sense that you’re supposed to protect. How can you- if you know a vote is fraudulent, right? How can you pass on a fraudulent vote to Congress?” At the time Trump and other prominent Republicans were saying that the 2020 election was stolen by President Joe Biden, even though there was and still is no evidence that that happened.

Trump has since made it clear that he believes Pence should have overturned Biden’s victory that day in the Senate. “I’m telling you: 50/50, it’s right down the middle for the top constitutional scholars when I speak to them,” he said, referring to the question of whether the vice president can simply refuse to accept the results of the election. “Because he’s passing on a vote that he knows is fraudulent. How can you pass a vote that you know is fraudulent?” Pence has insisted that there is no bad blood between them. He may run for president in 2024, will need votes from people who voted for Trump, and has refused to denounce Trump’s actions that could have gotten him killed. (LGBTQ Nation – Ales Bollinger at https://www.lgbtqnation.com/2021/11/donald-trump-says-common-sense-call-death-mike-pence/?utm_source=LGBTQ+Nation+Subscribers&utm_campaign=050e0719df-20211112_LGBTQ_Nation_Daily_Brief&utm_medium=email&utm_term=0_c4eab596bd-050e0719df-433273132)