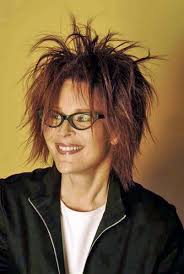 There are a variety of ways in which you may have encountered the music of out singer/songwriter Lauren Wood over the years. Perhaps it was when she was still going by Ilene Rappaport in the late 1960s band Rebecca and the Sunnybrook Farmers (great name, right?). Maybe it was a few years later when, along with her cousin, the in-demand violist Novi Novog, and bass player Ernie Eremita she was known as Chunky in the trio Chunky, Novi & Ernie. Chances are the way you will recognize Lauren Wood, as she came to be known on her first two solo albums from 1979 and 1981, is via the song “Fallen” (from her Cat Trick album), which became an unexpected, but well-deserved, hit single when it was featured on the best-selling soundtrack to the 1990 movie Pretty Woman. However it is that you know Wood, or if you are a complete stranger to her work, The Warner Bros. Years (Blixa Sounds) is a remastered single disc reissue of her self-titled solo debut album and Cat Trick. I had the pleasure of speaking with Wood who, in addition to being a marvelous singer/songwriter, has a great sense of humor, about her career.

Lauren Wood: We originally started as Rebecca and the Sunnybrook Farmers. Rebecca and the Sunnybrook Farmers were signed to Musicor Records and we did a record in New York. Then we all came out to California. Two of the members went back to Pittsburgh and we became Chunky, Novi & Ernie. Chunky, Novi & Ernie were signed to Warner Brothers and we did two albums for them.

GS: I would say that you have a very distinctive vocal style which I’ve heard described in a variety of ways. As the singer yourself, how would you describe your singing voice?

LW: Unique. Very soulful, I hope. Sultry [laughs]. These are some of the terms, and I like them. One of my favorites was, “The way she sings, she oozes with subtext.” When I vocalize, I sing in different tones to practice all kinds of tones up and down the scale so that I have colors to grab in my voice. When I hit certain notes and sing certain words.

GS: In 1979, you released your eponymous solo debut album as Lauren Wood, featuring Novi and Ernie. That album, as well as its 1981 follow-up Cat Trick have been reissued on CD as The Warner Bros. Years (Blixa Sounds). What does it mean to you have both albums available on one CD?

LW: What was really fun was that we had these high-resolution digital masters that we got from Warner Brothers. We went in and remastered it. I hadn’t heard these two records for so long. I’ve had other records come out after that. I was mesmerized [laughs] by my own music. I was coming at it like I was a stranger to the music. When we remastered them, I was like, “These songs are good!” The way it was remastered, the record sounds fabulous. Dan Hersch from d² Studio remastered it with me. I have to be involved in everything! Every little bit of artwork, every sonic anything, I have to approve of. I love the new 16-page booklet. We worked really hard with the art director at Blixa. I love the new cover! I’m thrilled to have two of my favorite records on CD, in new packaging and remastered. I’m over the moon.

LW: What happened was (producer) Ted Templeman was our mentor. Ted and Lenny Waronker signed us to Warner Brothers. Ted and I quite adored each other. When he signed the Doobie Brothers, before Michael was in the band, we kind of put our noses up and said, “Sounds like a bar band!” Then Ted came to us and said, “There’s a new guy in the band and he sounds like he could be your brother. His name is Michael McDonald. He’s just amazing. Wait until you hear him!” It was Ted’s idea for him to start singing on some of your records. Not only was there that incredible voice in my headphones, but he’s so funny. He’s hysterical and sweet and humble and I just adore him.

GS: The late Nicolette Larson recorded your songs “Can’t Get Away From You”, “Fallen” and “Breaking Too Many Hearts”. Can you please say something about Nicolette and what you thought of her renditions of your songs?

LW: Nicolette also worked with Ted Templeman. She recorded eight songs of mine. I was already in the studio all the time with Ted. Sometimes I’d pop in with Ted and Nicolette. She was one of my close friends, a really good buddy. Years later, we started to form a group with Valerie Carter.

GS: Wow! Your three voices together must have been amazing.

LW: Yes! We were The Compacts. We got a little deal at Capitol (Records) for a few months to make some demos. Joe Smith became the head of Capitol and he dropped everybody on the label who had ever done a record before except for Bonnie Raitt. He dropped us, but he kept Bonnie. We never actually made a record, but we have demos. Nicolette was a close friend and I was very happy that she was so supportive of me as a songwriter.

GS: I mentioned “Fallen”, from your Cat Trick album, which went on to appear on the Pretty Woman soundtrack. What was it like for you to have a hit single nine years after you recorded the song?

LW: It was fantastic [laughs]. Originally, when they asked me, for the Cat Trick album, what I thought the single was, I said that I think the best song and vocals are on “Fallen”. They said, “`Fallen`? There’s no drums! There’s no real chorus. We love it, but that can’t be a hit!” So they put out maybe my least favorite song – “Breaking Too Many Hearts” – as a single. It didn’t do much and then they dropped me [laughs]. Ten years later it’s in Pretty Woman and I’m a genius [laughs].

GS: You were always a genius; it just took them a while to catch on to that. In 1979, you covered Steely Dan’s “Dirty Work” and the year before, the Pointer Sisters also covered the song. Why do you think that song, as sung by women, was experiencing a surge in popularity in the late 1970s?

LW: There were so many people that recorded it. I think Melissa Manchester did it, too. I just dug it. I dug the melody. We tried to make an arrangement that was completely different. I think Billy Payne came up with some fantastic chord changes that really altered it. It’s a really soft song and there’s this really big guitar solo by Ronnie Montrose that’s so emotional. He was a friend of mine, too.

LW: It was. He cut two of my songs and turned them into heavy metal songs. Sammy Hagar sang them. I have covers by everyone from Johnny Mathis to Montrose and Sammy Hagar. I don’t think it gets more diverse than that.

GS: The music world recently suffered a terrible loss with the passing of Allee Willis, a songwriter with whom you collaborated on “In The Dark” and “Ain’t Got Nothing For Me” from Cat Trick. Would you please say a few words about Allee?

LW: Allee was my girlfriend for four years. We had the most incredibly fun time together. We laughed all the time. We wrote songs and were in the studio all the time. This is a major brilliant genius whose light went out on Christmas eve 2019. She was the most incredible person. She was always happy, always fun-loving. She was a fantastic artist. She did these amazing paintings, some of which she motorized to her music. It was such a devastating loss. There’s a group of us who cannot fathom the loss of Allee. We have a club and we meet once a month. We talk about her and try to get over this loss. Her house – I was with her when she bought the house – was a pink kitsch museum. Fifties furniture everywhere. It was gorgeous. They’re hoping to keep it as a museum. It’s the most incredible place to visit. She gave the most incredible parties. She used to do this one-woman show where she’d tell stories about songwriting. They were hysterical. She was at every birthday party I ever had. It’s such a loss. I’m so glad you brought her up. What a loss to the community, to the world.

GS: Is there by chance a new Lauren Wood album in the works?

LW: There could be. I’ve got a number of songs that I’ve written that I’ve never recorded. I’ve just been hesitant. Melody doesn’t seem to be part of today’s music which is frustrating to me. I’ve got some beautiful songs and even a couple of covers. I love to sing the Beatles’ song “I Will”. It’s one of my favorites. I play drums in a group called The Peculiars right now. I play a child’s drum set! This is my back-up band. The girl who usually sings harmony sings lead and we do cover tunes. Novi is in it. These are incredible musicians. Here’s the thing – we don’t ever practice. But everybody is so good! The lead singer will call out a song (during a show) or she’ll tell us a week before the gig. It’s always a surprise.