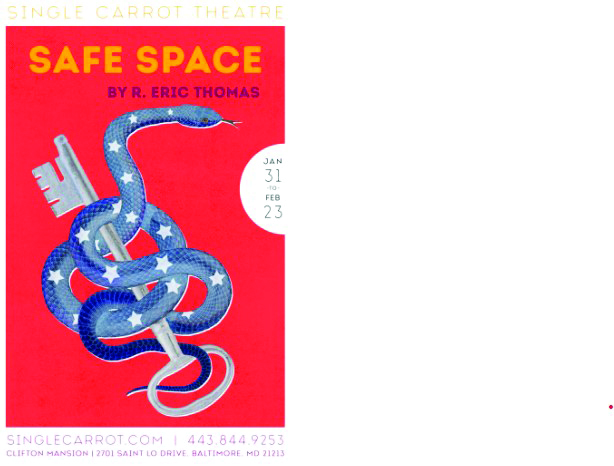 Running until Sunday, February 23rd, Single Carrot Theatre’s Safe Space, by Baltimore playwright R. Eric Thomas, will have audiences captivated. The production will be staged in the basement of historic Clifton Mansion in Clifton Park on St. Lo Drive.

Baltimore-based writer R. Eric Thomas is an award-winning playwright and staff writer at Elle.com, penning the daily current events and culture column “Eric Reads the News.” Thomas recently completed a memoir-in-essays, Here for It, or How to Save Your Soul in America, due out from Ballantine Books this February. The development of Safe Space has been a multi-year project between Thomas and Single Carrot Theatre, particularly with ensemble member Ben Kleymeyer, who will direct the piece.

“Eric wanted to write a play about why white people have panic rooms and guns, and we were discussing the movie Clue when he was first developing ideas for Safe Space,” says Kleymeyer, who has worked with Thomas on developing the piece over the last two years. The two initially were connected when Kleymeyer was invited to direct for a playwrighting fellowship with Cohesion Theatre Company. Since beginning their collaboration, they’ve hosted both public readings and private workshops with Single Carrot ensemble members and local actors.

“Throughout the process Eric wanted to keep the integrity of the tone like the movie Clue – very campy and fun, but very dangerous at the same time. It walks the tightrope of the ideas being serious, but the tone starts out lighter and the comedy is very inviting, bringing in the audience to interact with these bigger questions,” continues Kleymeyer.

Safe Space tells the story of Helen, a white non-profit executive, who inherits a historic house in rural Maryland. She hires black locksmith Courtney to unlock a mysterious door in the home’s basement, but opening it sets off a string of uncomfortable confrontations on race, history, and politics, bringing Helen and Courtney face to face with each other, as well as Charlotte, the ghost of a formerly enslaved person trapped in the house for over 150 years.

Safe Space will be performed at the historic Clifton Mansion in Clifton Park. Rather than using the beautiful historic rooms the mansion is known for, Safe Space, which deals with the mysteries and racist legacy locked behind a door in an inherited historic home, will take place in the rarely seen basement, off the usual path of visitors.