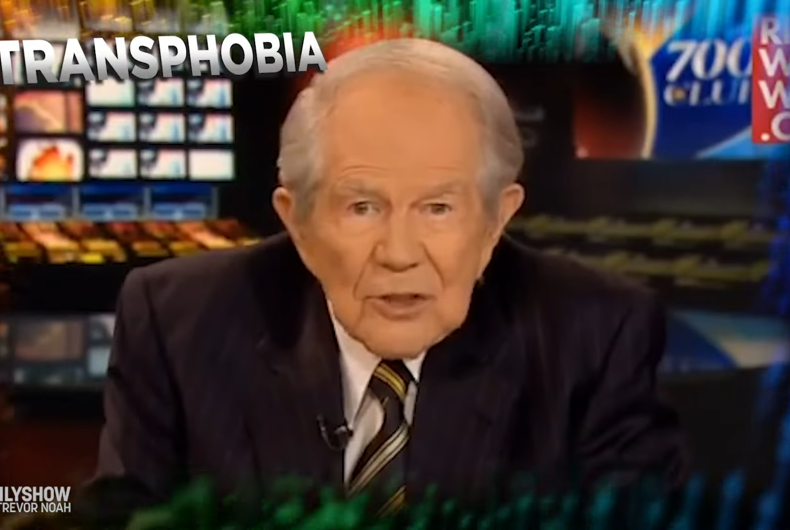 New York City – After televangelist Pat Robertson’s surprise announcement that he was stepping down as the host of The 700 Club after 60 years on air, lists of his “greatest hits” of the worst things he’s said over the years were quick to fill the internet, reports Bil Browning for LGBTQ Nation. And there’ve been some doozies. But the The Daily Show with Trevor Noah has compiled a tribute to Robertson, “Now That’s What I Call Yikes!,” that’s full of clips of the infamous self-proclaimed prophet spewing hate in the name of a loving God. He made a fortune from a blood diamond mine in Africa that he purchased with proceeds from his televangelist grift. Robertson also sold fitness equipment for a while, claiming that he could bench-press record-breaking weights in his 70s. He ran for president on the Republican ticket, but was beaten in the primary by former President George Bush. A few months ago, the 91-year-old said he’s “planning on” living another 29 years.

Robertson was widely mocked for his wild “prophecies” about the end of the world, election results, and foreign affairs. In 1998, he said that accepting gay people could result in hurricanes, earthquakes, tornadoes, and “possibly a meteor.” In 2018, he said that passing a ban on discrimination against LGBTQ people could result in “atomic war.” “We don’t want that,” he said. “We want the blessing of God, not the curse of God.” The same year, he said that drag queen story hours means that what humanity is doing is “trying to do is stick our fingers in God’s eyes.” “This was the original crime that led to the destruction of Sodom and Gomorrah, and the United States of America is on very slippery ground,” he said. “How is God going to bless America if we put our finger in his eyes repeatedly? And that’s what we’re doing. It’s not just some library that is going to be in trouble, it’s the whole population when God brings judgment.”