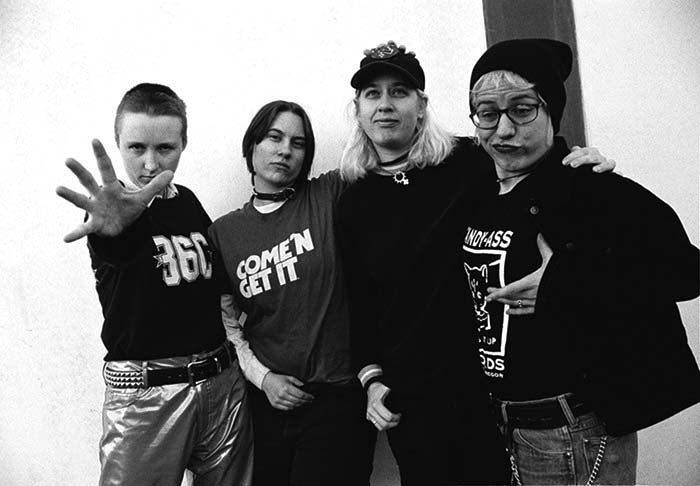 The importance of queercore band Team Dresch cannot be overstated.  The all-female Portland band, known for its quest for inclusivity, as well as acceptance of every gender and sexuality, debuted around the same time as the similarly feminist-minded Riot Grrrl scene that was also exploding in the Pacific Northwest. Along with contemporaries such as Sleater-Kinney, Tribe 8, Bikini Kill, and Heavens to Betsy, Team Dresch also offered listeners an alternative to the testosterone-fueled sound of the straight male-dominated grunge sound. To commemorate the anniversary of the release of Team Dresch’s highly regarded albums Personal Best and Captain My Captain, both are being reissued on LP (vinyl) and cassette. Team Dresch is also performing select West Coast dates with the possibility of more to come. I spoke with Donna Dresch about the band, the reissues and much more.

Gregg Shapiro: For the uninitiated, please say something about the genesis of the band’s name, Team Dresch.

Donna Dresch: We tried out so many names before we finally found one that stuck. We were Kaia and the Mustache Girls, Dyke Access Road (it’s the name of an exit off the freeway near Portland), a bunch of others I can’t remember. We were officially Magic Animal for a minute. Our first 7” cover art was finished and we had t-shirts and everything before we landed on Team Dresch. I think we used Dresch because I am not a singer, so it was showing we are all equal teammates.

Jody (Bleyle), Kaia (Wilson) and I all ran our own record labels (Candy-Ass, Mr. Lady, and Chainsaw) and it is such a relief not to have to go through the whole process of organizing pressings, and printers and distributors, etc., and just focus on creating art, something we’ve never been totally free to do because of doing all the business at the same time.

Why is it important at this time for these albums to be heard anew?

It seems like a good time, it being 25 years and all [laughs]!

CDs were the dominant format when Personal Best and Captain My Captain were first released. Now that they are being reissued, both albums are debuting on LP / vinyl. What does that mean to you?

And cassette [laughs]!  The cassettes were the hardest ones to sell back in the day and I’m surprised people actually want them again. I’ve been going through all my cassette archives and am remembering how important cassettes were for DIY distribution to get your songs to the people who wanted to hear you. I think I might be more excited for the cassettes [laughs]!

I’ve tried to make birthday Spotify lists but they just don’t have the same love as a mixtape.

Personal Best and Captain My Captain were initially issued on your Chainsaw Records and Candy-Ass Records. Chainsaw Records, like Slash Records, has its roots in the fanzine world. Can you please say something about the natural outgrowth of a record label from a fanzine?

Chainsaw the zine started in the late 1980s, mostly as a way for me to meet other freaky people like myself. It was something that I could hand to a total stranger who looked like someone I would like to meet. It was also a way to make other zine friends around the world, trading zines was our internet then. At the time I was also working at Revolver USA. One time, Gary Held let me take home a box of 500 cassettes of some terrible band that never sold (which was heading for the dump). I put tape over the edges so I could record over them and asked a bunch of people if I could put one of their songs on a mix tape that would go with an issue of Chainsaw zine. My friend Matt worked at a photo-lab and printed me 500 photographs that I could use as the covers. I spent a bunch of time at Kinkos making the tiny zine that fits inside the case, stickers that covered over the terrible bands name and that’s how Chainsaw the label started. I loved the bands so much and all I really wanted to do is listen to them and sometimes the only way I could do that is if I put out the records.

There’s an unexpected country influence on “Freewheel.” What can you tell me about that song?

Jody and Kaia both have secret folk roots in their DNA. “Freewheel” was an amazing cat that lived at the Lucky House, a house where we spent much of our time at (and still do now from time to time). It makes sense to have a folksy sounding song while sitting on a porch with a cool old cat. Our very first band practice was at the Lucky House. Thanks, Lucky House! That must have sounded weird [laughs].

Personal Best shares its name with the legendary 1982 Mariel Hemingway movie. Please say something about that.

It doesn’t share it, it is completely taken from the movie [laughs]!  For me, it was the very first time I saw any lesbian representation in a movie. It was terrifying.

Captain My Captain opens with the song “Uncle Phranc,” an homage to lesbian musician Phranc. Please say a few words about Phranc’s influence and about the song.

“Uncle Phranc” is a song about choosing your own family. A lot of us need to create our family from scratch. I’m lucky to have my band as not only my band, but my family, my near and dearest friends. Phranc is the wise uncle that gives us great advice, that we try to listen to but don’t always do a great job at.  I think we all have failed at most of the advice she gave us in that song.

On the subject of influences, the Team Dresch reissues are being released around the same time as the series of reissues of albums by X. Please say something about the influence, if there is any at all, of Exene Cervenka and her band X, on Team Dresch.

X is a band that has stood the test of time. I saw them a year or so ago and the bond they have with the audience and the joy they seem to have by being on stage together after all this time is amazing. It was so cool to see such a multigenerational crowd; they have a whole new generation of people just getting into their music. I can’t think of a person who isn’t influenced by X and Exene. “Under the Big Black Sun” was one of my first punk albums (I was late to the X game) and I studied like it was the bible.

What can you tell me about an upcoming Team Dresch concert tour?

Right now, we are playing up and down the west coast to celebrate the reissues. I love playing all the shows that we have been playing since we reunited in 2004. We average about a show a year, but this time we get to play a bunch all together. We’ve grown up, we’re smarter, we play better, we love each other even more and allow ourselves to have fun. It is true that each show feels like a family reunion with the crowd. It’s really more about the crowd than us, each show is a giant love fest and I’m so looking forward to it.