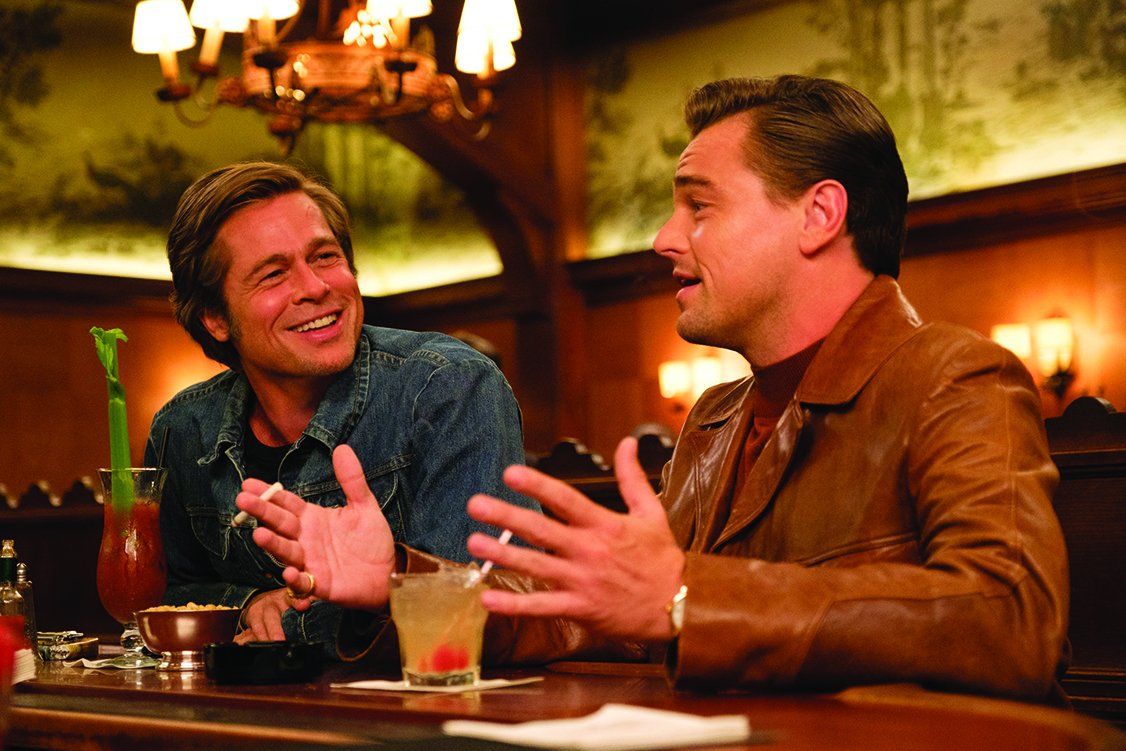 Here is a trigger warning  this review contains possible spoilers!

Obsessive auteur Quentin Tarantino, who won a 2020 Golden Globe for his screenplay, takes his longstanding cinematic love affair with Hollywood to new and exhilarating heights in Once Upon A Time  In Hollywood (Sony / Columbia). Drawing on his own oeuvre as well as the vast entertainments from mid-20th century movies and television, the sprawling (nearly three hours!) epic is Tarantinos most ambitious patchwork quilt film; alternately comforting and gripping.

Bordering on being washed-up, actor Rick Dalton (Leonardo Di Caprio) is at a career crossroads in early 1969. After his popular Western series went off the air, hes been relegated to bad guy / heavy guest-starring roles in a variety of other peoples TV shows. As work has dried up, his longtime stunt double Cliff (Brad Pitt, winner of a well-deserved Oscar, Golden Globe and BAFTA for his performance), has become more of a man Friday to Rick, chauffeuring him to sets and meetings (Rick lost his license due to several DUIs), making household repairs (shirtless, I might add), carrying his load and such.

Meanwhile, Sharon Tate (Margot Robbie) and Roman Polanski (Rafal Zawierucha), Ricks Cielo Drive married neighbors in Benedict Canyon, are having a somewhat better time of it. Living in a house formerly rented by musician Terry Melcher, they were followed by paparazzi wherever they went. However, the gate at the end of the driveway gave them privacy.

In February, Rick takes meeting at Musso & Franks with new agent Marvin (a scenery devouring Al Pacino) who promises him big things and is desperate to book Rick into Spaghetti Westerns. In a visual review of Ricks career accomplishments, we even see him singing Jim Lowes song Green Door on Hullabaloo. Creating this kind of brief nostalgic reference is one of the things at which Tarantino excels. After insecure Ricks minor emotional meltdown after the meeting, Cliff drives him home. On the way, they encounter some Manson Family members crossing the street carrying their recent dumpster diving edibles. One of the girls, whom we later learn is named Pussycat (Margaret Qualley), gets flirty with Cliff.

Cliff, by the way, doesnt live in Benedict Canyon. He lives, with his wonderful dog Brandy, an expressive and adorable pit bull, in a trailer behind a drive-in in Van Nuys. Nevertheless, wherever Rick goes Cliff goes. One place they dont get to, however, is the Playboy Mansion with Sharon and Roman. There, we get some background on another important player, Jay Sebring (Emile Hirsch), courtesy of Steve McQueen (Damian Lewis).

Back on set, Rick talks stunt coordinator Randy (Kurt Russell) into hiring Cliff. This despite the fact that Randys wife hates Cliff because he supposedly got away with murdering his wife. Cliffs time on set is short-lived after he challenges Bruce Lee (Mike Moh) to a fight in what is easily the funniest scene in the entire movie. Meanwhile, self-doubting Rick has an encounter with a serious young actress named Trudi (scene-stealer Julia Butters) who manages to provide Rick with the confidence hed been lacking.

Cliffs next Hollywood adventure occurs when he once again crosses paths with Pussycat. He offers her a ride to the Spahn Movie Ranch, a location hes familiar with from his stunt work. Little does he realize that its become the Manson Familys headquarters. This pivotal scene, where he also encounters Squeaky Fromme (Dakota Fanning) is as chilling as it is humorous.

Another amazing scene features Sharon Tate in LAs Westwood neighborhood. While there, she comes upon a movie theatre showing her movie The Wrecking Crew in which she co-starred with Dean Martin. Tate, still a relative unknown, even a couple of years after Valley of the Dolls, is given free entry to the theatre where she takes a seat and watches the movie without being recognized. Its a mostly dialogue-less scene, but Robbie imbues it with such emotion that its a joy to watch.

Of course, anyone familiar with the fate of Tate, Sebring and two of their friends knows what happened in August of 1969. Here is where Tarantino takes complete control, rewriting history in a way that is unexpected and delightful. In doing so, he not only gives the audience the most shocking happy ending ever, he is also able to take his reputation for exploitive (if comedic) violence in an utterly unforeseen direction. The ultra-grisly finale simply must be seen to be believed and appreciated.

At least 40 minutes too long, with the self-indulgent Western movie shoot featuring Rick and James Stacy (Timothy Olyphant) being at the heart of the problem, Once Upon a Time in  Hollywood is nevertheless one of the most entertaining and satisfying movie experiences of the year.

Digital bonus material includes more sights and sounds of the 60s consisting of seven (!) additional scenes. Blu-ray exclusives include six featurettes, ranging from The Fashion of 1969 to Shop Talk  The Cars of 1969 and Quentin Tarantinos Love Letter to Hollywood.