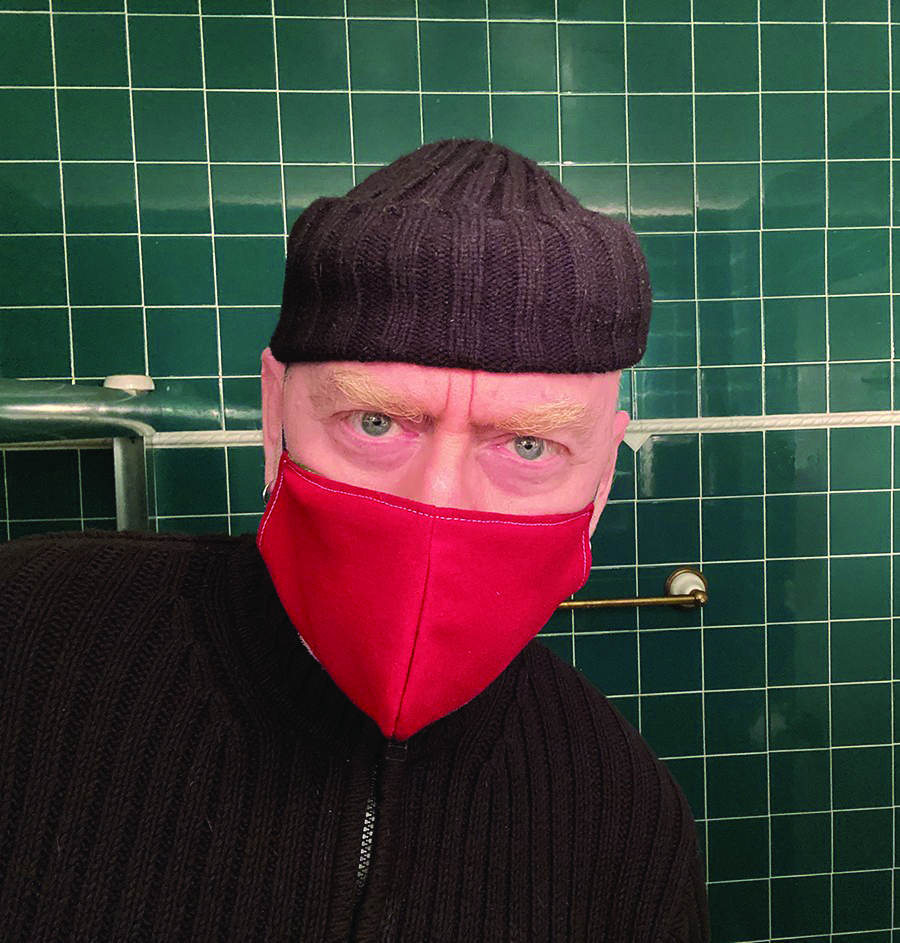 Scott Free’s impressive and admirable list of professional accomplishments keeps growing all the time. Homolatte, his Chicago-based LGBT live performance series, is in its 20th year. He has had two theatrical musicals produced. He was inducted into the Chicago Gay and Lesbian Hall of Fame in 2010. In 2005 and 2009 he was named by the OUTMusic Awards as “Out Musician of the Year.” He runs Alt Q Radio, an indie queer radio station on Live365. Since 1996, Free has released five studio albums under his own name with 2020’s The Last Revolution (Leather / Western Records) being the latest. Scott was kind enough to answer a few questions in advance of the release of his new album.

Gregg Shapiro: In prepping for this interview about your new album The Last Revolution, I went back and relistened to your four previous solo albums. Getting Off, The Living Dead, They Call Me Mr. Free and The Pink Album incorporated a vast array of influences including punk, hip-hop, folk, industrial, pop, house and jazz. Looking back on your musical evolution, what gives you the most satisfaction as an artist?

Scott Free: It’s funny that you bring up genre. This is my first solo album in 12 years, and in-between I did two musicals and a children’s album, so I wasn’t paying much attention to the online popular music world. Now everything is tagged by genre, and I struggled to fit what this album is into a genre. The two closest I found were folk punk and alternative rap; but I’m not sure if that’s right either. A lot of what I do on this album is really rhythmic spoken word; there’s no real attempt to sound like rap. Also, the subject matters of the songs are the reason for the album, so in my head, the “genre” is protest, or social justice; but that just doesn’t fit into this current system. I don’t think I have a preference for genre. I’m working on two different live music sets for when we can get back to that; one is acoustic punk and the other is piano cabaret.

If there is one constant in your music, it’s your political voice, which comes through loud and clear on The Last Revolution. How do you see your role as a musical activist?

I have a tendency to do concept albums. The Diesel Tykes (children’s) album was an LGBT family album. The Pink Album was a song cycle about a time period of the 1960s through today, about growing up gay through the formation of the current LGBT community. The concept for this one was to do an album of all social justice songs. Also, it was to pull myself out of the lyrics. The word “I” is not on the album. I really wanted to contribute to the body of work of protest music, but also, it is where I am personally at this time in my life. I am active in direct action/social justice work with my involvement in Gay Liberation Network in Chicago, and I’ve been protesting at a number of the Black Lives Matter / Defund the Police protests.

The Last Revolution opens with “The Beginning of the End (Climate Change).” Climate change is also addressed in “Shut ’Em Down.” In what ways have you reduced your carbon footprint?

I drive a lot less than I used to, and haven’t been on a plane in many years. I’d say I’m 95% vegan; of course, hardcore vegans would say that means I’m not vegan [laughs]! So, however that is supposed to be expressed – almost, or wannabe vegan or something [laughs]! But the best way for all of us to reduce the carbon footprint is to get out there and protest to defund the military, and stop government subsidies and the bailing out of oil and coal companies and meat factories. Only 100 companies create 70% of all global emissions. That’s what the song “Shut ’Em Down” is all about.

Songs such as “Republicans and Democrats” and “This Is Not Our Government” express your dissatisfaction with the government and the two-party system. Have you ever considered running for office, and if so, would your platform include what you sing about in “Every Freedom”?

With politics, I’m more of a behind-the-scenes person. Most of my work recently has been on Ranked Choice Voting, which would be its own kind of revolution in elections. I’ve also done work for Dario Hunter, who’s running for the Green Party’s presidential nomination. My stance for 2020 is that voting Green Party in the non-swing states is a good thing – it helps them get federal funding and better state ballot access. But in the swing states – sorry Greens, but hell no – we’ve got to get this ass out of office! But past 2020, we absolutely need to get Ranked Choice Voting in 50 states. It’s in Maine already, so 49 to go! As far as “Every Freedom,” that song is my attempt to write a universal folk song, to write something that someday, might become a standard. And yes, in my politics, absolutely, human rights of all kinds are the priority!

As a resident of the deep South for more than six years, I tried not to take offense at the message of “Split the Thing in Two.” Do you think there will ever be a time when the North and South will be able to see eye to eye?

I hesitated on putting this song on the album, for obvious reasons. This is one of those Randy Newman-ish sarcastic songs that I can get in trouble for. In fact, the song wasn’t working at all musically until I came up with the silly Civil War fife and drum thing to start it off. Then I felt it had the right tone. But realistically, no, I’m not actively working on state secessions [laughs]! But the song does come out of the aggravation of what America truly is: two countries. To answer your question, no, I don’t think there will ever be an agreement between the two ideologies that we label as North and South. I wrote it because I’m amazed at how the ideological split is so complete, so absolute. But of course, those two ideologies are not conveniently divided along some actual geographic line. But with all the statues coming down right now, the song is timely. I’ll give it that!

The Last Revolution is being released during the COVID-19 pandemic, and it sounds like the songs were written before we found ourselves in this deadly and terrifying situation. Have you written any new songs that address the pandemic?

Actually “This is Not Our Government” was written during the pandemic; it was a last-minute addition to the album. It is referencing the federal government’s CARES Act, where the government gave the vast majority of the money to corporations and big business. That’s the thing about our supposed “two party” system: when it comes to the big money, they seem to agree that the rich are the priority. The Democrats talk as if they don’t, but the final bills always end up that way.

We began the interview by talking about your early work. Your song “Meet You at the Church” includes the “Will you marry me, Morrissey?” chorus. Knowing what we now know about Morrissey’s political leanings, how do you feel about that song?

That was another one of those sarcastic songs. I was actually really angry at Morrissey for not coming out of the closet, at a time when it would have been so helpful to do so. So, I was kind of “outing” him in song. But no, not only wouldn’t I marry him, I wouldn’t go to his shows, or buy or listen to his albums. I’m so glad to see Johnny Marr is out there doing his own versions of Smiths songs!