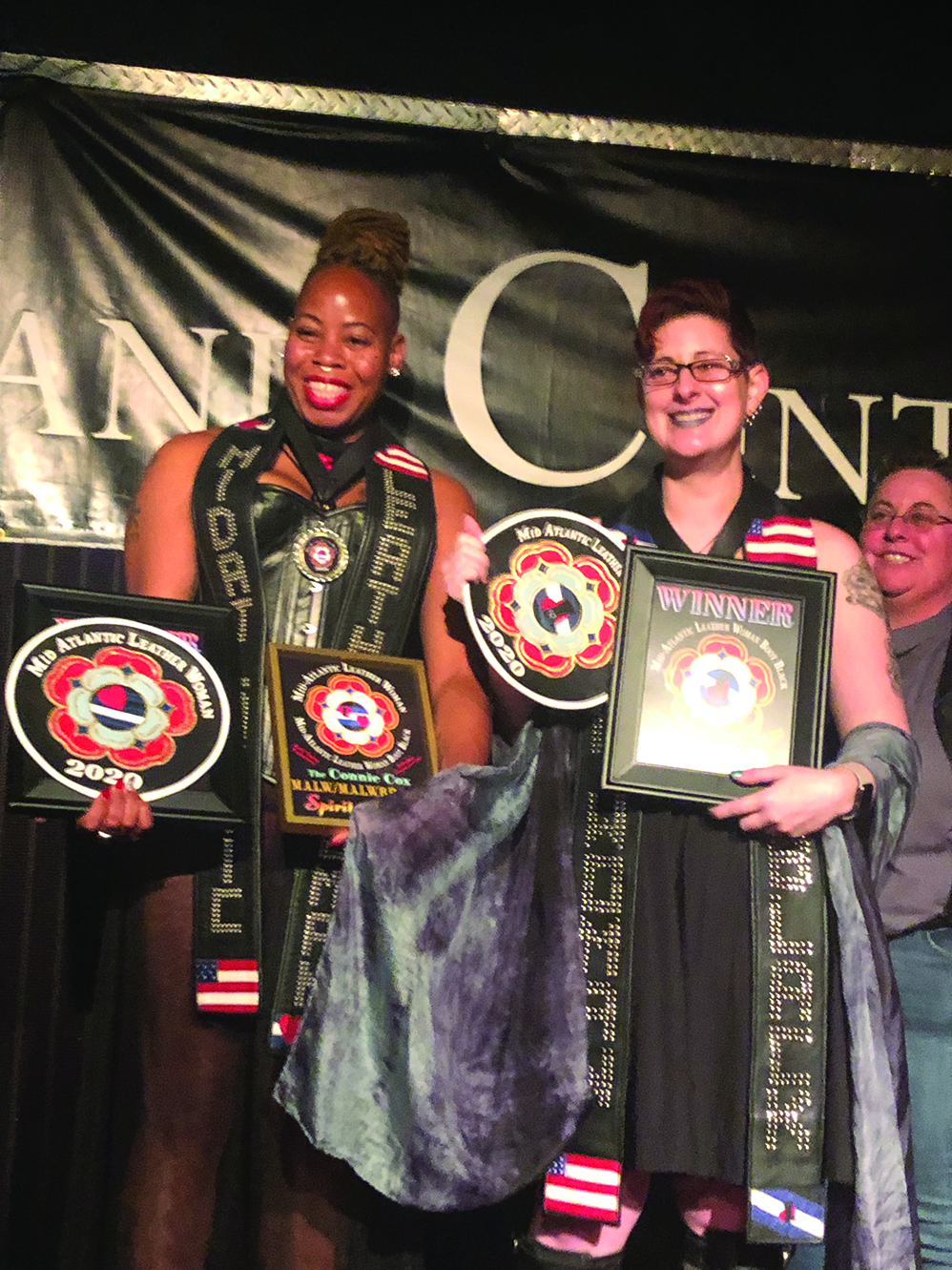 Friday’s Meet and Greet at the Clifton Pleasure Club had a carnival atmosphere, with strings of lights and outdoor tents for the bootblack, Sierra the Lady Barber, and the live band Chix Without Stix, who provided a wonderful mix of music throughout the evening and performed again on Saturday night.

Saturday’s four-hour long contest was held at Grand Central nightclub and included performances by Queen of Baltimore Pride 1999 Jazmen Diamond, King of Baltimore Pride 2018 Chris Jay, King of Baltimore Pride 2019 Justin Sane, and live vocals by Ms. New Jersey Leather 2016 Christy Lee. For many years most leather contest started like a sporting event with a color guard and the national anthem. Several years ago, at the MAL-W contest it just seemed that the contest started on an unhappy note as several audience members took a knee during the national anthem. Last year the national anthem was just dropped from the opening. This year I hope a new tradition was born. Christy Lee started the contest with an absolutely beautiful rendition of the song that many consider to be the gay national anthem: “Somewhere Over the Rainbow.” I had to remind myself that there is no crying at leather contests.

Contestants were scored in a range of categories with the Mid-Atlantic Leather Woman contestant performing an onstage fantasy and the Mid-Atlantic Leather Woman Bootblack contestant having been presented the night before with a pair of boots that needed attention and was told to work on one boot so that the judge’s could see a before and after version of the boots. Both contestants answered a fun question onstage and gave a brief speech. I’ve always said that for me the most important category in a leather contest in the interview with the judges. This is where one learns what the contestant is all about. Unfortunately, at most contest the audience never sees the interview. It is usually done in the afternoon prior to the evening contest. At this contest the interview was done onstage in front of the audience. Although it made for a longer contest, it really helped the audience to learn who these women are and how they feel about issues such as social media. I loved Treasure’s comment: “I stay out of drama.”

Although there was only one contestant for each title, it’s important to note that a contestant must earn a minimum score from the judges to be awarded a title. (I have seen several contests where someone was the only contestant for a title but walked away empty-handed.) The judges were: International Slave 2018 BlueFrost; founder and editor-in-chief of Tagg magazine and the executive producer of the Tagg Nation podcast, Eboné F. Bell; Mid-Atlantic Leather Woman Bootblack 2018 Bumper Bootblack; Mid-Atlantic Leather Woman 2018 / Mid-Atlantic Leather Woman Bootblack 2019 Foxxy; head of the House of Kreatures, producer, and event organizer Girl Pixie; organizer, educator, writer, and burlesque artist Tahnee; and an educator and host of New York’s only sex / play party for woman and the trans community, Red Robinson.

On Saturday evening everyone returned to the Clifton Pleasure Club for a victory party hosted by FIST and on Sunday afternoon a very laid-back party was held at the Clifton Pleasure Club to celebrate the anniversary of Hooker & Boys,which for 20 years has brought our community the biggest holiday party (and largest fundraiser) the annual “12 Days of Christmas” variety show. Don’t miss the 21st “12 Days of Christmas” on Saturday, December 14th at the Maritime Conference Center in Linthicum Heights, Maryland. (Details can be found on Facebook)