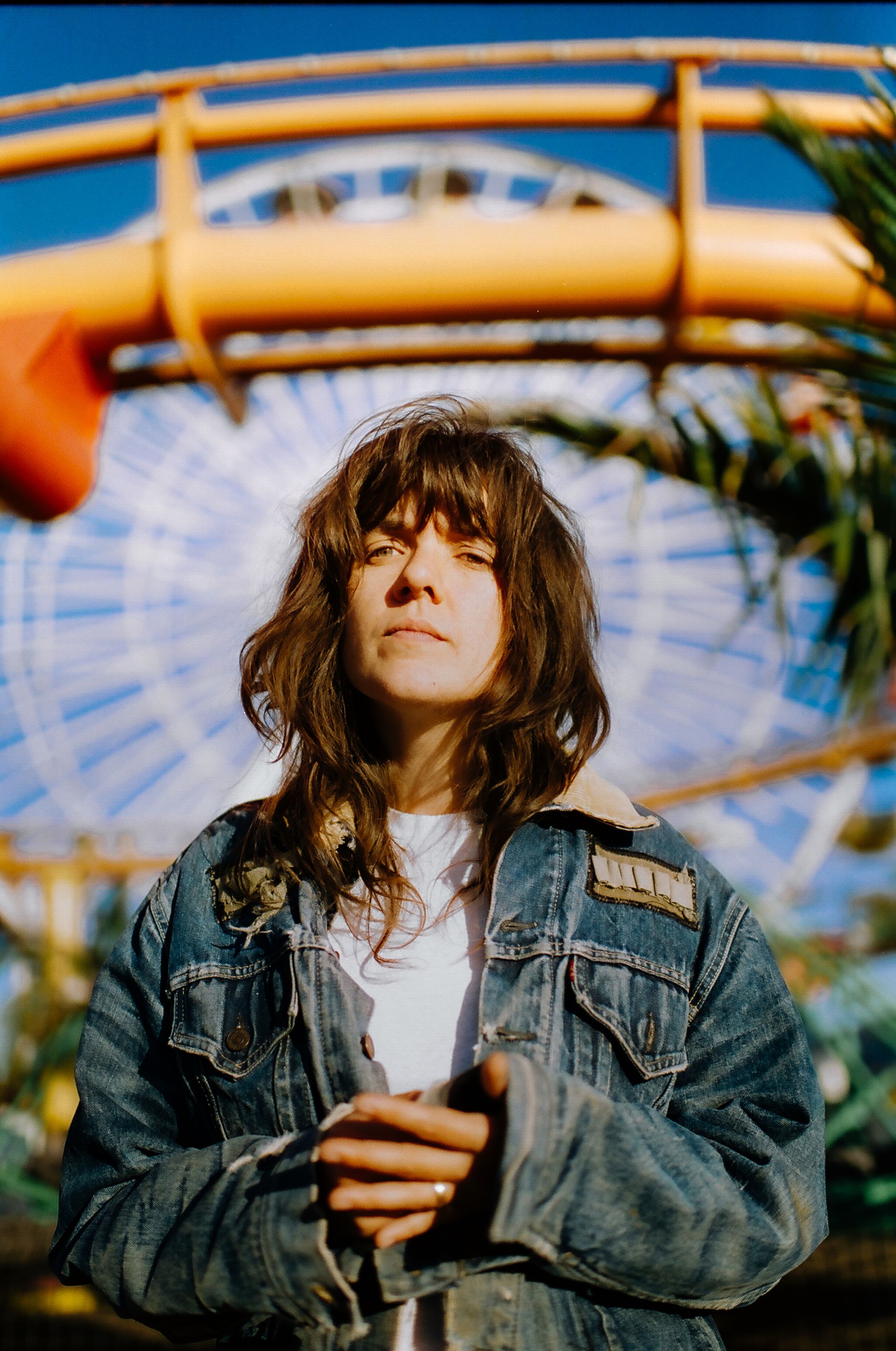 Remember when lesbian rock was measured on a Melissa Etheridge scale? The way you could find common ground with other Indigo Girls, Tracy Chapman, K.D. Lang, Joan Armatrading, Melissa Ferrick, and Two Nice Girls fans. Then, along came Sleater-Kinney, Kaia (and The Butchies), Tegan and Sara, Le Tigre, Team Dresch, Mary Gauthier and Ani DiFranco, and the world began to shift on its axis. These days the spectrum has broadened to include Brandi Carlile and Brandy Clark, St. Vincent and Sia, Hayley Kiyoko and Kehlani, Julien Baker and Beth Ditto, Lucy Dacus and H.C. McEntire.

Courtney Barnett’s brilliant 2015 debut album Sometime I Sit and Think, and Sometimes I Just Sit earned her a Grammy nomination for Best New Artist. In the interim, she collaborated with Kurt Vile on the 2017 album Lotta Sea Lice. While not as immediately gratifying as Sometimes I Sit and Think…, Barnett’s new album Tell Me How You Really Feel (Mom + Pop / Marathon Artists / Milk) definitely has its charms. Grungy opener “Hopefulessness” alerts listeners that Barnett is exploring other avenues. Still, poppier tunes such as “City Looks Pretty” and “Charity,” prove that listeners need not despair after hearing a blistering number such as “I’m Not Your Mother, I’m Not Your Bitch.” If you detect some Breeders influence, that could be because Barnett is joined by Kim Deal and Kelly Deal on “Crippling Self-Doubt and a General Lack of Confidence” and Kim on “Nameless, Faceless.” Barnett plays up her gentler side on “Sunday Roast” and the aptly titled “Walking On Eggshells.” (Courtney Barnett performs on July 24th at The Anthem in Washington, DC, and on October 23rd at The Fillmore in Philadelphia.)

Lush (Matador), the suitably named full-length debut by Snail Mail (aka teen sensation Lindsey Jordan), plays like a reverent tribute to the 1990s, the decade in which the performer was born. That’s the 90s through a queer, 21st century lens. “Pristine” asks the age-old question, “Don’t you like me for me?” and you can dance to it “anyways.” “Heat Wave” is as warm as the summer sun and centerpiece “Stick” reaches a crescendo that stays with you. The dreamy “Golden Dream” will get your kicks moving and “Full Control” is a sorry-not-sorry anthem. All in all, Snail Mail delivers. (Snail Mail performs July 12th in Baltimore at the Parkway Theatre, and July 14th in Philadelphia at Union Transfer.)

Like Snail Mail, Tancred (aka Jess Abbott, formerly of Now, Now) channels the edgier women you might have seen at Lilith Fair, such as Kristin Hersh or Tanya Donnelly, on her new album Nightstand (Polyvinyl). This especially comes across on the irresistible “Queen of New York.” Also worth mentioning are “Hot Star,” “Something Else,” “Just You,” and “Reviews.” (Tancred performs on November 7th in Philadelphia at Underground Arts, and November 10th in Washington, DC, at The Black Cat.)

A queer woman of color, Frankie Simone has dedicated her “life and music to radiating light” as the “fierce spirit” she is. Her five-song vinyl EP Love / Warrior (Infinite Companion), features the anthemic title track, on which she urges her people to “come out, come out.” She wears her queerness right on her chest in “Queer” and the dramatic love song “Love You Just the Same” declares that “love is worth the heartache and the heartache’s worth the pain.”

In the vast and varied world of drag, those performers who sing in their own voices, and do it well (see RuPaul), tower (in heels) over those that lip-synch. A competitor on season nine of “RuPaul’s Drag Race,” Alexis Michelle is a queen with Broadway aspirations as she demonstrates on her debut album Love Fool (Broadway Records). Broadway numbers including “Follow Your Heart” (Urinetown), “You Can Always Count On Me” (City of Angels) and the medley “Simple / Good Thing Going” (from Nine and Merrily We Roll Along, respectively) are examples of Michelle’s way with a show-tune. Michelle also wisely includes familiar songs from the contemporary pop songbook such as the Beatles’ “The Fool on the Hill,” The Cardigans’ “Lovefool,” Blondie’s “Call Me,” Paul Williams’ “Rainbow Connection” and Carole King’s “Beautiful” (which later became a Broadway show tune).

A dizzying blend of provocative hip-hop, industrial and electro, Basura (Christeenemusic.com) the second album (available on limited edition vinyl) by “transgressive queer” performer Christeene is an earful. Never one to mince words, Christeene kicks things off with an ode to butt sluts in “Aktion Toilet” (check out the music video by gay filmmaker PJ Raval), turns, stares, shakes and poses on a different kind of runway in “TSSP,” celebrates the bottom in “Butt Muscle,” honors Nine Inch Nails and Ministry in “Welcum My Lord,” and takes us to clubbing in “Fuk V29.”

With Elton John on his retirement tour (hint: if it’s the same one Cher did, he’ll be back!), the gay male music quotient has shrunk considerably. Fortunately, we have Car Seat Headrest, Perfume Genius, Ezra Furman, Calum Scott, and Frank Ocean, among others, to carry on the tradition. You can also add the following artists to the list.

Led by Portland, Oregon, “retro-futurist” Chanticleer Trü, Chanti Darling effortlessly channels 80s and early 90s soul into a glistening synth-laden glitter cannon of musical delights on RNB Vol. 1 (Tender Loving Empire). Think Sylvester’s falsetto crossed with the early keyboards of Prince (when he was still sexually fluid) and you’re on the right path. Seductive and slinky tracks such as “Casual” (featuring the Last Artful Dodgr) and “Pillow Talk” are definite mood-setters. Want to dance? You can shake it to “St*rs,” “Grab Onto Me,” “Wake Up The Night,” and the bootylicious instrumental “VCR.”

You’ve heard of blue-eyed soul? Michael Blume makes gay-eyed soul on his seven-song EP Cynicism & Sincerity (S-Curve). Blume is more successful when he sticks to singing, but he insists on rapping, which gives his songs a suburban New Jersey quality. Opener “I Wanna Know,” for instance, would be so much better without the spoken-word passages. The same can be said for “Maybe Love Is True.” It’s almost as if Blume doesn’t trust his vocal capabilities, which are far and away his best attribute, as you can hear on “I Got You.” When Blume asks “are you mad that I’m gay” in “RU Mad,” the answer is, “No, we’re mad you’re a poseur.”

Out singer / actor George Salazar teams up with songwriter / musician Joe Iconis for Two Player Game (Ghostlight). A performer known for his work in theatrical productions of Godspell, Spring Awakening, Here Lies Love, Be More Chill, and others. Salazar is an expressive singer on songs such as “Broadway, Here I Come!,” “I Love Play Rehearsal,” “The Answer.” “Michael in the Bathroom,” and “The Goodbye Song.”

Described as a “surrealist, Mexican-American, queer pop artist,” Felix and the Future loads his album Holy Hands Vol. 2 (Felixandthefuture.com) with glammy sci-fi dance pop. Imagine Jobriath with a dance club beat and you get the gist of songs such as “Karen,” “A Good Son,” “Candy Road,” and “Fumbling Through the Gramophone.”

With his cover of the Carpenters’ “Top of the World” on his previous EP, Getting High, Bobby Blue The Balladeer gave us a clue about what to expect on his new self-titled seven-song EP (Bobbybluetheballadeer.com). An acoustic “folk / country-western” recording featuring covers of Gene Autry’s “Mexicali Rose,” Loretta Lynn’s “Whispering Sea,” Patsy Cline’s “I Fall to Pieces” and Gilberto Parra’s “Por Un Amor”; it’s a wonderful showcase for BBTB’s impressive vocal range. He also takes an interesting approach to Madonna’s “Who’s That Girl?” and even reimagines one of his own songs, “(You’ve Got To) Go.”