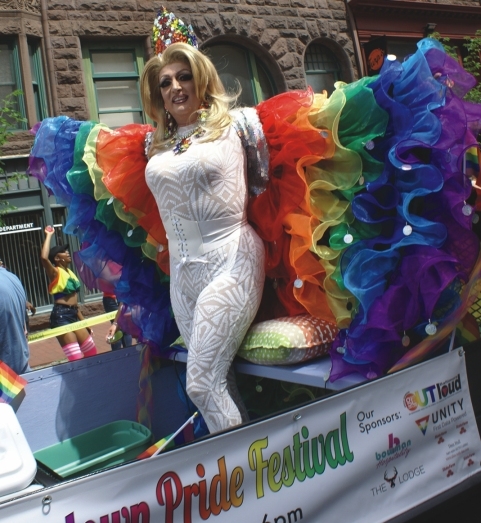 The reigning Queen of Hagerstown Pride, Ashley Bannks, is set to entertain and electrify the masses at this year’s event. Hosting the celebratory Block Party, being held from noon to 6 p.m. on Saturday, July 15th, Bannks is thrilled to be able to give back to her hometown. “I’m originally from Hagerstown!” Bannks explained. “Hagerstown is near and dear to my heart, considering that I was born and raised in the area.”

Bannks’s career began, as many tales do, once upon a time. “My history goes back way too many years,” Bannks laughed. “As a lot of queens, I started out just dressing up for fun on Halloween in 1992. And 25 years later, I’m still dressing up in drag.”

Performing to her is more than for fame or fortune. “The main reason is that I have fun with it, and I’ve stuck around not for the money but the fun and sisterhood that we queens have. As well, it’s all the fundraising and community outreach. We’ve raised money for so many organizations, whether gay or straight. Those are the times that I get most pleasure out of what we do.”

Bannks went on to explain that this was one of the main inspirations that led to her current crown. “When they decided to have the Queen of Pride pageant, one of the driving forces for me was so I could actually make a difference. Not only with Pride but within the community.” Bannks added, “I’ve really enjoyed myself over the last few months as we are really diving into Pride. I’m also seeing more and more of my allies in the area coming together to create a spectacular Pride event for everyone, not just us gay individuals.“

One of the many things that Bannks is looking forward to is the how Pride allows all allies and families to come together to celebrate. “I’m most looking forward to seeing not only our LGBT community, but all of our allies and the allies with their children. Last year, we had such a large population of children with their parents. It’s so heartwarming to see a generation of parents who are exposing their children to all types of life and not just realizing there is only one type of person in the world.”

Bannks works tirelessly in maintaining a constant rotation of looks to keep her performances fresh and appealing for all audiences. “I do make and design some of my own costumes, and I also buy costumes that are created by other people. I do 99% of my own hair. I don’t have other people do that. I don’t like to be the same all the time. I like to do a variety of entertainment looks. I look at myself as an entertainer, from the standpoint of what I’d like to see out of an entertainer.”

Bannks looks up to many other queens for inspiration. “One I happen to be married to,” Bannks revealed. “Nicole James, the one I’m married to, is the one I look up to the most. She’s always there to bounce ideas off of, and if I have something that’s a little edgy or won’t work, she’ll tell me, Bannks laughed. “Sometimes, I’ll still do it, anyway. But she’s always that rock for me.”

Bannks, who most recently attended both the Baltimore and Frederick Pride celebrations, wore a fabulous rainbow-flag inspired outfit to both events. “I must have taken over 200 pictures for 45 minutes with families and people. It was amazing! The children looked up to me like I was a Disney princess. Those kids just liked me for me. They don’t know anything but what they saw on the outside, and they liked me for who I was.”

Bannks also recalled a touching moment during the 2017 Baltimore Pride parade. “As we were waving, there was this little girl who was sitting on a balcony on the second floor with her mom and dad. The little girl started waving and I waved back. Next thing I knew, here comes the dad with the little girl out of the building. He said, ‘She thinks you’re so pretty and wanted to meet you.’ I almost cried! They brought their daughter down just to meet me because the parents were that open about it. Those are the moments that mean the most to me.”