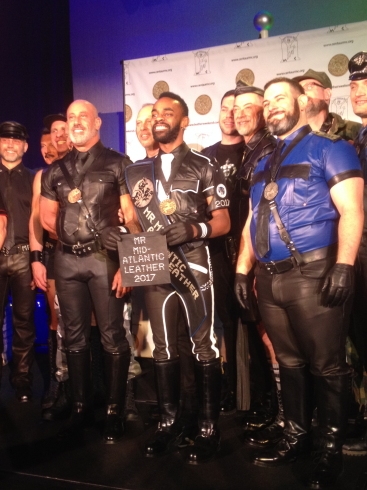 We did it. We made it through another year. If you watched some of those “Year in review” pieces on television, 2017 was really a horrible year. I for one went to too many funerals in 2017. Thankfully I ended my year on a high note with a trip to Fort Lauderdale, where I visited my ShipMate club brother Mike Reisig, two COMMAND MC members Mike and Marty, and took a cruise to the Dominican Republic with Thomas of the Centaur MC, Mr. Maryland Leather 2013 Bob Rose, and Mr. Maryland Leather 2007 Sir Steve. Once again my friends from the leather community helped me make happy memories in what was not a happy year. Now it is 2018 and instead of looking back, I’m ready to start another year in leather.

The leather year starts in Washington, DC, and I’m very much looking forward to Mid-Atlantic Leather Weekend (MAL) on January 12th to 14th at the Hyatt Regency Washington on Capitol Hill (400 New Jersey Avenue NW). The fun actually starts on Thursday, January 11th as a group of Mr. Mid-Atlantic Leather titleholders take over the club bar at the DC Eagle starting at 10 pm. The Hyatt will be packed all weekend with all kinds of fun events. Friday evening brings the International Mr. Rubber social and the Highwaymen TNT Impact dance party. Saturday afternoon from 2 to 6 is the popular Onyx cocktail party and gear show and Sunday at 1 pm is the Mr. Mid-Atlantic Leather 2018 Contest followed by a dance that evening at the 9:30 Club. The Hyatt has been sold out for months, but a few rooms are available at the nearby Phoenix Park Hotel. It is worth the trip down to DC just to shop the huge leather vendor mart at the Hyatt. For a complete schedule and more information visit Leatherweekend.com.

MAL is a really big event, but you can also have a great time and meet new people at a smaller leather function such as the monthly “Sinner Sunday” gatherings put on by the New Jersey leather family at Paradise in Asbury Park, New Jersey. The first one for 2018 will be held from 2 to 6 pm on Sunday, January 21st with a theme of “It’s Freakin’ Cold.” Wear something warm, like a sexy union suit, and relax with the warm folks from the New Jersey leather family. Other Sinner Sunday events will be held February 11th, March 25th, April 15th, and May 20th.

If you plan to be in Philadelphia at the beginning of the year make sure that you stop in the William Way LGBTQIA Center between January 12th and February 23rd and check out “Black & Blue, The Colors of Leather.” This art exhibit, curated by Mid-Atlantic Leather Woman 2018 Amy (aka “Leather Fox”) and Ms. Philadelphia Leather 2017 Heather Raquel “aims to display what black and blue means through the eyes of artist and what it means to embody the leather / kink lifestyle.” For details visit the Center’s website at Waygay.org.

Coming up on January 20th, the annual Brother Help Thyself (BHT) grant reception will be held at the Baltimore Eagle starting at 2 pm. Join the celebration as local charities receive grants from funds raised by various leather clubs and LGBT organizations. This really is one of the feel-good events of the year. (And you thought leather was just fun and games.)

It is not too late to book a flight and get out of this winter weather and head to Las Vegas on February 22nd to 25th for Drummer North America (DNA) at the Alexis Park All Suite Resort. Not only will DNA / DNA boy and DNA Bootblack be selected, but new this year will be the first ever Women of Drummer Contest. It may be hard to think about April when it’s this cold outside, but you need to make reservations now to attend BBM, IMsL, and CLAW. The 8th annual Bears, Bikers & Mayhem is scheduled for April 5th to 8th at the Eisenhower Inn & Aspire Conference Center. This annual weekend of cocktail parties, dance parties, and the Mr. Mayhem Leather / Bear Contest always sells out. Also appearing this year is comedian Harrison Greenbaum from TV’s “Last Comic Standing.” Get your tickets at Bearsbikersandmayhem.com. The International Ms. Leather (IMsL) and International Ms. Bootblack (IMsbb) Contest is scheduled for April 19th to 22nd in San Jose, California. All details can be found at Imslbb.org. The host hotel is already sold out for the 18th annual Cleveland Leather Awareness Weekend on April 26th to 29th, but two additional nearby hotels are available. This leather weekend in downtown Cleveland, Ohio, includes men’s BDSM dungeon parties, a big vendor mart, and silent auctions, Flex porn star parties, a formal leather dinner, and many demos and educational seminars.

Circle you calendar in May for Excelsior MC’s annual “Lust for Life” and Fire Island Leather Weekend on May 18th to 20th. Have you ever been to Fire Island, New York? It’s amazing and this is the best weekend to go. Details are at Excelsiormc.com.

No list of coming leather events would be complete without the biggest leather event of them all: International Mr. Leather (IML). Chicago’s Congress Plaza Hotel is the host hotel again this year and the leather world will gather in the beautiful city of Chicago on May 24th to 28th for the Super Bowl of leather contests.

The New Year has started and here are just a few of the many leather events coming up in the next few months. We made it. We have another year to enjoy. I hope it is a good one. Go out to a leather event, meet new friends, and make some happy memories.