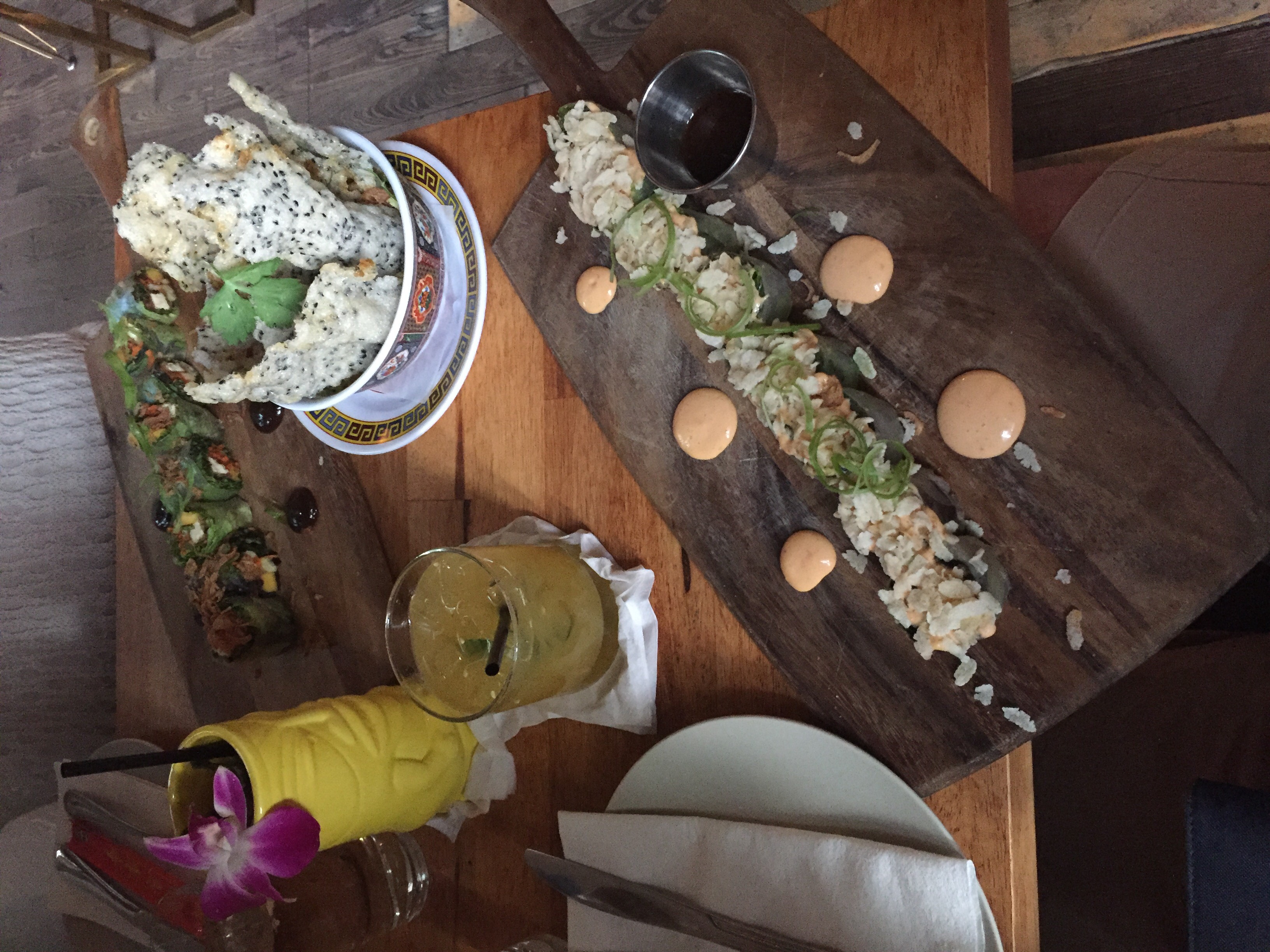 While away on vacation last week, I was so excited to spend time with a very dear friend. She suggested dinner 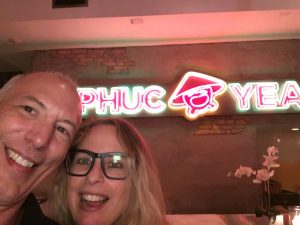 Saturday night at a Vietnamese-Fusion restaurant, Phuc Yeah, in Miami. Granted, it was a bit of hike from where we were in Fort Lauderdale. But the name of the restaurant grabbed my attention, so there was no question we were going.

Located away from the hustle and bustle of downtown Miami or South Beach, Phuc Yea is located in an area of Miami that’s in the midst of reinvention. That said, it would be easy to miss, but I’m sure glad we didn’t. I wasn’t too sure what to expect, as upon walking in, there isn’t a whole lot to see, other than the “Phuc Yea” sign in neon lights. As you can imagine, some guests were busy taking selfies in front the sign. We were escorted upstairs to the dining area and bar, and very quickly the vibe changed for the better. The upstairs had its own unique look, with lots of different art – and light fixtures – deliberately combining styles from Vietnam, areas of the world with Cajun influence, and of course, Miami.

We were tucked away at a table for two, near a window, in one of the dining rooms. In short order we were warmly greeted by our waiter, who proceeded to tell us that Phuc Yea was not going to be a typically Vietnamese experience, as its menu infuses “Cajun influence with Miami swagger.” I would soon find out what this meant, as I ordered a cocktail called Lady Boy from Hanoi, which consists of Ketel One, grapefruit liqueur, strawberry, lime, fantinel, and rosé ($12). Let’s just say upon first sip, I could taste the Cajun influence – there was definitely a kick!

We decided to try several options from the menu to share: the Edamame Hummus ($10 – edamame, tahini, lemongrass chili oil, rice crackers, fresh herbs); Veggie Roll ($10 – crispy tofu, mango, carrot, cucumber, herbage, hoslin crispies); Spicy Tuna Roll ($16 – line caught local yellowfin tuna, lemongrass, chili, cucumber, rice crispies, herbage, lettuce); and Caramel Chicken Wings ($12 – fish sauce caramel, lemongrass, chilies). When our dishes were placed on our table, I was impressed by the presentation, each plate adding its own flair to the food placed on it. Each item was absolutely bursting with flavors I’d experienced never before. I was a little concerned that we would become overwhelmed by the chili in our choices, but actually, that did not happen. It was if other ingredients in each dish offset the chili spice, which led to a brilliant meal.

There are other menu items that the food adventurous might also find appealing, such as the Octopus ($18 – 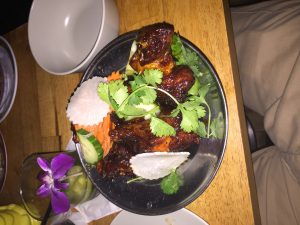 lemongrass oil, lime, herbage, kaffir lime); Cajun Cod Bao (buns, pickles, sriracha remoulade); or the PY Noodles (signature house noodles, garlic, oyster sauce, Parmesan cheese). Of course, there are many others, but want to provide you readers with a general sense of what Phuc Yea has to offer.

It’s always wonderful to spend quality time with close friends, and even extra special to do so while enjoying a meal. Our service was top-notch and our waiter was so gracious, recognizing we had much catching up to do, we were never rushed, as he ensured we had the ultimate dining experience. While not located nearby, I am hopeful that if visiting South Florida, readers will consider an alternative dining experience. I love telling people that I ate at a restaurant called “Phuc Yea,” and I am sure you will, too. (For those connected to me on Facebook, yes, I certainly did take a selfie in front of that neon-sign, and posted it instantaneously!)