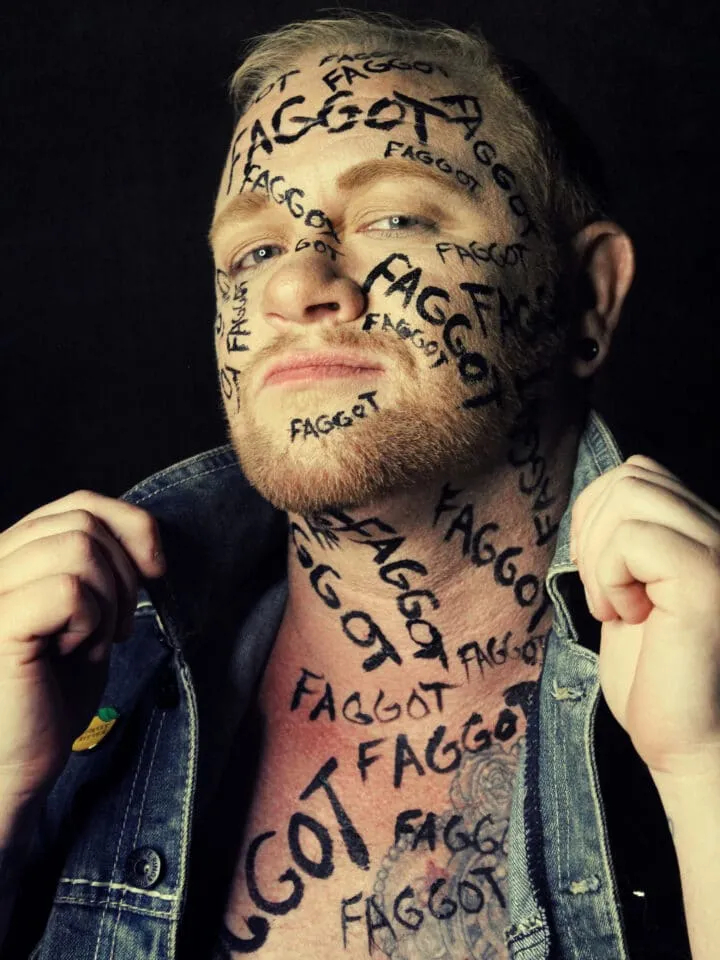 Phoenix, AZ – So culturally accepted is verbal bullying that the children’s rhyme “Sticks and Stones” can be recited from heart by any English-speaking child or adult. Traditionally used to ward off name-calling and boost confidence in kids, the mantra has been given new meaning in the form of a series of photographs by Phoenix-based portrait photographer Holly Shoemaker. She is an advocate for survivors of assault and abuse, as well as a LGBTQIA+ and BLM ally. Of prime importance to Shoemaker is creating a safe space for the subject. “I love being able to create something and show someone a version of themselves they never knew they could be. It could be a simple portrait or a completely fantastical version of themselves. At the end of the day, I seek to empower people.” But the “Sticks and Stones” project ironically came out of the concept of an unsafe space.

“I had done photos for a burlesque performer . . . [and] shared the photos from our set to a photography and modeling networking group I’m part of and one of the models from the group attempted to slut shame my client . . . I am a huge advocate against such behavior, so I called her on it. After which I was blocked.” Later, a friend sent her screenshots of the group page, revealing the model had been calling Shoemaker the c-word. “So, I did the only thing I could think to do. I painted the word c**t all over my face, neck and chest, then did some self-portraits. The next day, I shared it on social media and offered a photography special. This is how my latest photography project, Sticks and Stones: Words Have Power. Take Yours Back was born.”

The project aims to reclaim the power of negative words in a physical way by mapping them on the body. “Especially now, in the digital age, certain individuals feel even more emboldened to throw around insults and nasty words in an effort to garner a reaction. As we have seen, too many times, that reaction can lead to so much hurt and destruction. We have all been subject to these words at one point in our lives.” To create the series Shoemaker asked ordinary people, not models, to choose a word that had been used in relation to them either as an insult, slur, judgment and so forth. “There are very few words that are off the table. From there I paint that word on their face, neck, chest and in some instances shoulders and arms and we do a shoot where they begin to take power back over that word . . . The great thing about it is that there’s really no wrong way to go about it. If you want to make a funny face, stick out your tongue, flip off the camera, get angry, cry, show quiet defiance, it’s all acceptable,” says Shoemaker. “It’s about how you want to express it and let the world know, ‘This word does not define me. This word cannot control me and screw anyone who thinks they can use it against me’.” (Out Voices Phoenix, formerly Echo Magazine – Merryn Johns and Holly Shoemaker at https://phoenix.outvoices.us/new-phoenix-photo-series-confronts-bullying/)