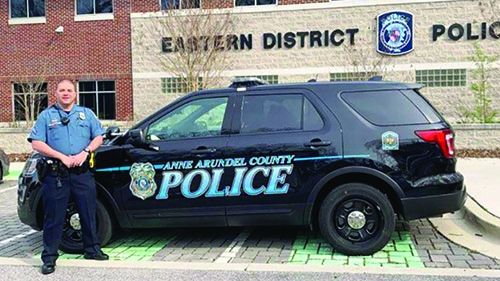 “The assumption is negative unless you are outwardly affirming.” – Tom Koerber

Now, you may already know this. Then again you may not. Cpl. Robert Koch joined the growing list of Maryland LGBTQ liaisons throughout our state in April. He joins professionals like Jabari Lyles of the Baltimore City Mayor’s Office; Lt. Becky Fetcher of the Hagerstown police department; Sommer Gray of Sinai / Lifebridge Health – just to name a few.

In Cpl. Koch’s own words – directly from the Anne Arundel county police department’s official press release, “As a member of the LGBTQ community myself, I feel honored and excited to be the LGBTQ liaison…. As liaison, my responsibilities will be responding to the questions / concerns of the citizens, attending community functions, acquiring relevant training for officers, recruiting new officers, and establishing a support system. The top priority is to make sure the LGBTQ community and the public in general know that the police department is here to protect and serve all residents without judgement or prejudice.”

Cpl. Koch has been a member of the force since 2012. He is currently assigned to the Eastern District. Since taking his position and working to bring himself up to speed Cpl. Koch has been a presence at the training academy, introducing himself and his new role to his fellow officers. He has manned a booth at the inaugural Annapolis Pride, marched in the Annapolis Pride parade, and has been making the rounds, introducing himself at places that serve us in the County.

Since 1962, LGBTQ liaisons have served a vital function between the community and the organizations they work for. In a nutshell, a liaison is both the spokesperson for the company / organization on all things related to the community as well as an advocate for LGBTQ people with the organizations they serve. In other words, they have a lot on their plate at all times. Their positions are created both proactively and reactively. Cpl. Koch’s position came about because Anne Arundel county citizens wanted an LGBTQ Liaison.

Here’s where you can get involved in if you live in Anne Arundel County. You can send Cpl. Koch LGBTQ-affirming resources. If you know of a homeless shelter, churches, or other affirming community services that are safe for us let him know at p91939@aacounty.org You could also just send him an email welcoming him to the role and thanking him for being willing to serve the community in this way. It’s a pretty badass move.

If you don’t live in Anne Arundel County but you want an LGBTQ liaison take note that the corporal’s position came about because Anne Arundel residents asked for support. Find out who you need to talk to and make the ask. The worst thing that can happen is you’re told “No.” The best thing that can happen is that you shatter the myth that we’re all doing fine because we’re being quiet.

Join me next time and see how this has started to evolve in other areas of Anne Arundel County and what you can do to expand the conversation right in your own neighborhood.