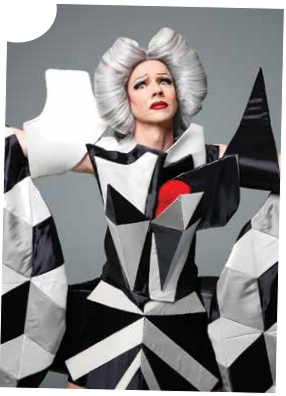 If ever there was a modern gay renaissance man, it’s John Cameron Mitchell. The actor/writer/filmmaker probably first crossed most of our radar when Hedwig and the Angry Inch, which he co-wrote with gay musician Stephen Trask, first opened off-Broadway in 1998, featuring Mitchell in the lead role. The 2001 movie version, starring and directed by Mitchell earned him both a Best Director prize at Sundance and a Golden Globe Award nomination. Other films directed by Mitchell include Shortbus (2006) and Rabbit Hole (2010), which starred Nicole Kidman and marked the feature film debut of Miles Teller. Now, more than 20 years after Hedwig’s debut (and following its 2014 Broadway debut starring Neil Patrick Harris and subsequent wins at the Tonys), Mitchell is taking Hedwig (and the wig, we hope) out of the box in a new series of live concert events titled The Origin of Love Tour: The Songs and Stories of Hedwig in select cities. I had the privilege of speaking with him before the tour began.

Gregg Shapiro: Beginning in February 2019, and then picking up again in June, you are performing a series of concerts — The Origin of Love Tour: The Songs and Stories of Hedwig. How did the concept for the concert come about?

John Cameron Mitchell: It really came about because my mom’s Alzheimer’s care was beyond me and beyond her. It really was a crass, yet tasteful, grasp for healthcare money [laughs]. The first opportunity was in Australia last summer. I forged the show there with two wonderful audiences at the Sydney Opera House and elsewhere. I wrote a piece that I became very proud. It talks about the making of Hedwig, the inspiration, working with Stephen Trask, and how my boyfriend and his death effected it, as well as Plato, the Gnostic gospels, and philosophical underpinnings. Also, how it resonates today. How it’s effected my life. It has become a piece in and of itself that is sort of an autobiography.

All I have is anecdotal evidence of how it effected people. People come up to me, maybe once a week, and say, “It really helped me at a time when I felt like I didn’t know myself. I couldn’t find my people. I knew I didn’t fit in in some way, usually to do with gender or sexuality.” Hedwig never identifies herself as trans, because, as a boy she as forced into a gender decision by the patriarchy, in effect. “You cannot leave unless you are married! You cannot marry the man that you love!” And the man himself if like, “Actually, I kind of prefer you as a woman” [laughs]. There’s this kind of lack of choice and agency, which is not trans. That was actual abuse. It had to do with the binarchy, too, choosing one or the other. What I love about the new trans world is that binarchy is no longer the norm. It’s about fluidity, choosing your gender, representing what you are. If you choose to or not to manipulate your body, so be it. You decide what you are, which can only be healthy for our culture. Even at Northwestern, some of the professors were a little embarrassed by my work after graduation. Other professors fought to have me come back and speak to students. Some weren’t sure what to make of Hedwig. It wasn’t Ibsen. I always had great support from people like Frank Galati, who was my mentor at school. He was a boundary pusher, (encouraging us to) use everything in our power to make something on stage. When I would meet trans people, I’d say “Hedwig freed me up. If Hedwig could create herself and bounce back from what was forced upon him/her, I can, too.” In other words, I feel empowered to do what I need to do and what I need to make. If a weird play or movie like this can resonate… when we first came out, there was no chance of us being on Broadway because of homophobia, because drag was considered low-class, punk rock was not considered theater music. We were always on the outside. For me, it was never a trans statement. I’m not trans. If I was 18 years old now, I might want to free myself from the binarchy and identify as non-binary trans. I’m too old now [laughs] and I don’t care. I am who I am. I’ve always been out as gay since my last year at college at Northwestern and I don’t feel the need to add any new labels because I’m just trying to make money for my mom. But I’ve become proud of this piece. I want it to be an oasis in a time of panic. I want to gather together our Hedwig community and give them hope. I get hope from doing it, from touching them. I love crowd-surfing in a seated venue, which might very well happen.

For those who don’t know, how did you and your Hedwig collaborator Stephen Trask, who is joining the “Origin of Love” tour in June in New York, meet?

We met on a plane. We talk about that in the show. We were both ignoring the movie, which was When Harry Met Sally. He put down a Fassbender biography on the seat between us, almost as an ice-breaker. I think of Fassbender as an ice-maker, but… it was the beginning of a conversation. We kept bumping into each other, over time, for the next few years. When I was looking for a composer for a piece that would use rock music, I went to see his band at CBGB’s. His bass player became my boyfriend. He saw me in the musical Hello Again and we both agreed that we must work together.

Is the “Origin of Love Tour: The Songs and Stories of Hedwig” also a way for you to commemorate the 20th anniversary of Hedwig and the Angry Inch?

It wasn’t planned that way. Because I want to make it beautiful with my costume, and back-up singer and band and everything, I end up not making any money really [laughs]. I kind of break even. If I was (performing) alone with tracks, I could make money. But I don’t want to be alone on stage. I’m bringing around a community of people to do this. I’ve never been great with money. I’ve been great with creative community. Those things lead to other things. I always find that if you do what you need to do, enough money comes along. You’ll never be rich, but enough. People have been really sweet. Some have made a little t-shirt fund for my mom and me on Instagram and have raised enough for a month of her care. You get by. I’m very lucky to be able to help my mom and that my fans are there, too. There’s going to be a Criterion version of (the movie) of Hedwig in 2019. We want it to last for the next generation, too. This is a way of keeping the community feeling cuddly in a time when you need it.

In addition to you, an amazing array of actors have portrayed Hedwig on stage including Michael Cerveris (who I saw do the show at the Jane Street Theatre in 1999), Neil Patrick Harris, Taye Diggs, Michael C. Hall, and Andrew Rannells. Is there someone who hasn’t played Hedwig that you’d like to see do so?

There’s always another crew, which is great. It never ends. What’s fun about it, is that it’s a mask, it’s drag rather than trans. It’s a mask that anyone, any gender can wear. We’ve had trans people, women and men play it. At first, (casting) a man made sense because he has to also become Tommy at the end. Some people have the right chops to do sing it and some don’t. It’s got to be the right person who feels it and can technically do all of the things. Because it’s now more part of the culture, there’s an openness to women playing it, which is great. Lena Hall played it on the West Coast. At the end, she walked into the light naked. Her female body was so moving to me. It could be Hedwig’s body. It could be the actor’s body. It could be any of us. Any of us could be Hedwig. If you understand those feelings, put on the mask, and then take off the mask when necessary, when you’re done with it. To me, it’s a tool. Anyone who plays it says it’s the hardest and most rewarding thing they’ve done, and they’re changed. The foam wigs on the fans in the film is a metaphor for Hedwig is everybody, if you dig down deep enough.

What did it mean to you when the production starring Neil Patrick Harris won four Tony Awards, including Best Revival of a Musical?

I call it “Best Survival” [laughs]. We barely made it. Hedwig’s just barely holding on. That keeps it honest, if you know what I mean. We’ve never been on top. That night was pretty special. It was more pleasurable than “Oh, my God, we made it!” We already knew we made it with the people who saw it and are changed by it. A Tony doesn’t do that. Yes, the Tony Awards and the world changed so that Hedwig is not considered anathema to the Great White Way. That was cool to know. But then the world will change again. I always thought of Hedwig as a very traditional entertainment in terms of its form. It’s not challenging. There’s an opening number, there’s a closing number. It uses Broadway structures. It’s got jokes. It’s like Gypsy. The unappreciated woman. I always thought it was traditional Broadway. It’s cool that Broadway finally agreed. When I won my special Tony (in 2015) for reprising the role, it was awesome, but also wasn’t necessary. We had already had our rewards. Maybe because I grew up in the time of AIDS and always felt that, moment to moment, I was grateful to be alive and angry that homophobia killed people and that transphobia kills and it goes on and on. To me, what I made was important. A message for the message’s sake, art for art’s sake. Money, fame, awards – those things helped more people see it. The fact that Neil played it meant that many more people saw it who wouldn’t have otherwise. I’m not against it, as long as we’re not compromising.