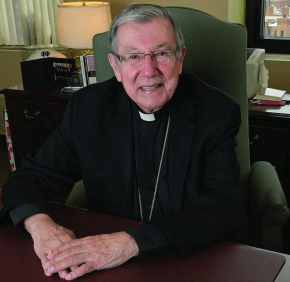 New York City – David Hudson reports for Queerty that nine Catholic bishops in the U.S., including retired Baltimore bishop Denis Madden, have signed a joint statement to LGBTQ youth to tell them they are supported and loved. The group worked with the Tyler Clementi Foundation, which was set up in the wake of the 2010 suicide of a student, Tyler Clementi, to tackle LGBTQ bullying in schools, workplaces, and faith communities.

In addition to Bishop Madden, the most prominent figures to sign were Cardinal Joseph Tobin, archbishop of Newark (pictured above), and Archbishop John Wester, who leads the Archdiocese of Santa Fe. Two of the signatories – Madden and Bishop Thomas Gumbleton, Diocese of Detroit– are retired.

The statement reads in part, “As Catholic Bishops in the United States, we join with the Tyler Clementi Foundation in standing up for at-risk LGBT youth in our country. “As we see in the Gospels, Jesus Christ taught love, mercy and welcome for all people, especially for those who felt persecuted or marginalized in any way; and the Catechism of the Catholic Church teaches that LGBT people are to be treated with ‘respect, compassion and sensitivity.’ All people of goodwill should help, support, and defend LGBT youth; who attempt suicide at much higher rates than their straight counterparts; who are often homeless because of families who reject them; who are rejected, bullied and harassed; and who are the target of violent acts at alarming rates. The Catholic Church values the God-given dignity of all human life and we take this opportunity to say to our LGBT friends, especially young people, that we stand with you and oppose any form of violence, bullying or harassment directed at you. Most of all, know that God created you, God loves you and God is on your side.” The letter echoes sentiments recently expressed by Pope Francis, who had voiced support for same-sex civil unions. (Queerty – David Hudson at  https://www.queerty.com/u-s-bishops-sign-open-letter-lgbtq-youth-god-side-20210126?utm_source=Queerty+Subscribers&utm_campaign=6de0a2f5d6-20210126_Queerty_Newsletter&utm_medium=email&utm_term=0_221c27272a-6de0a2f5d6-431876119)