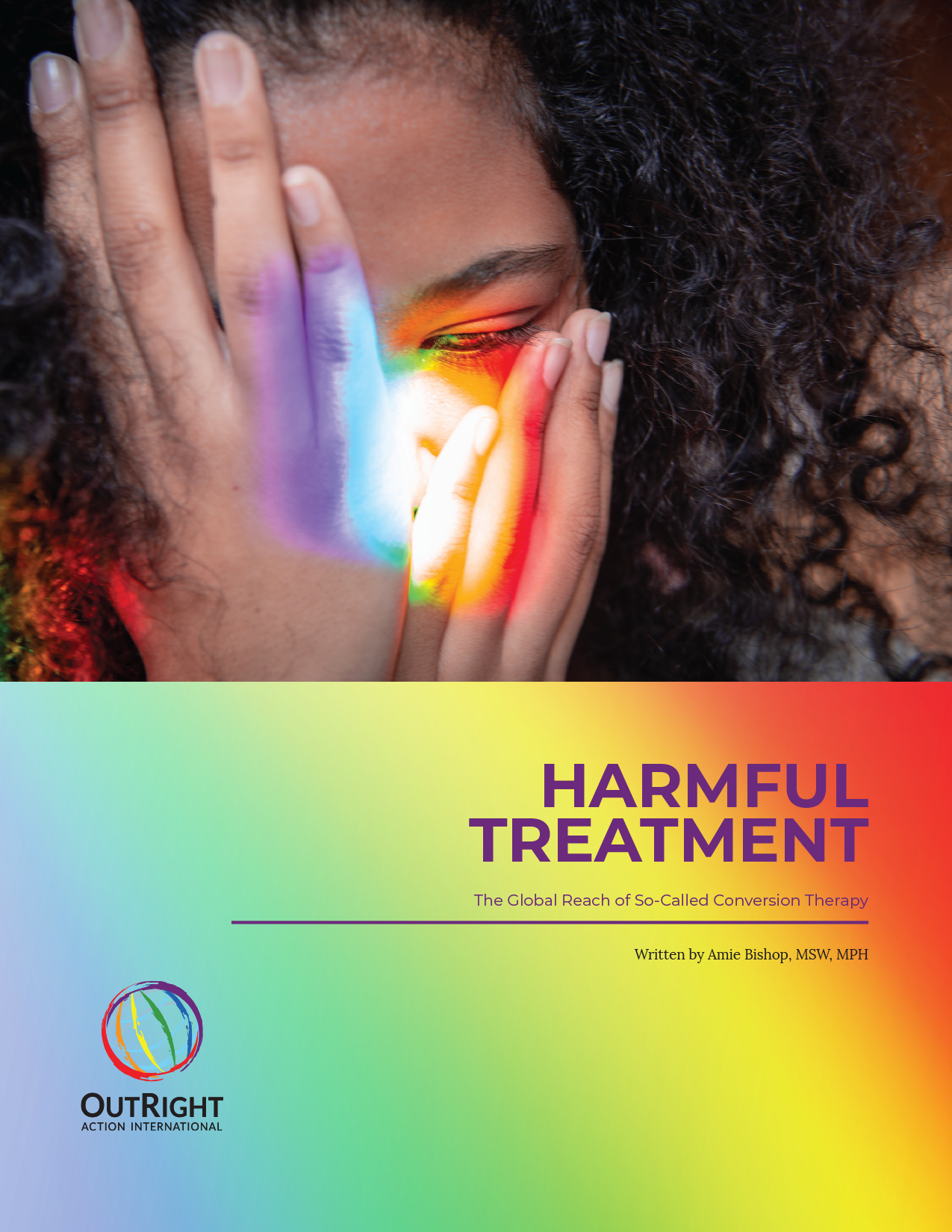 New York City – A groundbreaking report released by OutRight Action International today exposes the global reach of so-called conversion therapy. Drawing on data from survey results with almost 500 respondents from 80 countries, and in-depth interviews with experts and those subjected from more than a dozen countries, the report overwhelmingly shows that so-called conversion therapy efforts occur across the world and are predominantly promoted and perpetrated by people acting in the name of religion or pseudo-health care, often instigated by family pressure.

“Conversion therapy” is the most widely used term to describe practices [of] attempting to change, suppress, or divert one’s sexual orientation, gender identity, or gender expression. It is also called reorientation therapy, reparative therapy, reintegrative therapy, or, more recently, support for unwanted same-sex attraction or transgender identities. The practices vary due to religious, cultural, or traditional contexts and range from overtly physically violent, such as electroshock or “corrective rape,” to psychologically abusive, such as isolation or psychiatric hospitalization, or more subtle forms of talk therapy or group therapy. Practices can also be religiously based, including extensive prayer, fasting, and spiritual rituals. But regardless of the form they take or the name attributed, so-called conversion therapy practices are not a recognized form of therapy and certainly do not result in conversion. In fact, such practices cause deep, lasting trauma that affects every realm of life.

Maria Sjödin, deputy director of Outright Action International, commented: “Our report paints a chilling picture of the global prevalence of these barbaric practices which constitute cisgender, heteronormative indoctrination. So-called conversion therapy efforts hinge on the belief that cisgender heterosexuality is the norm, and gender identities beyond the binary and/or same-sex attraction not only fall outside the norm but have to be changed, if need be by brutal, inhuman force, through practices which have been recognized to be tantamount to torture by the United Nations High Commissioner for Human Rights.” Sjödin continued: ‘We welcome the efforts of a handful of governments around the world to ban so-called conversion therapy, and urge governments in other countries highlighted in this report to take similar steps to safeguard their LGBTIQ citizens from these harmful practices.” Access the full report [at Outrightinternational.org/reports/global-reach-so-called-conversion-therapy]. (Seattle Gay News at Sgn.org/sgnnews47_35/page2.cfm)