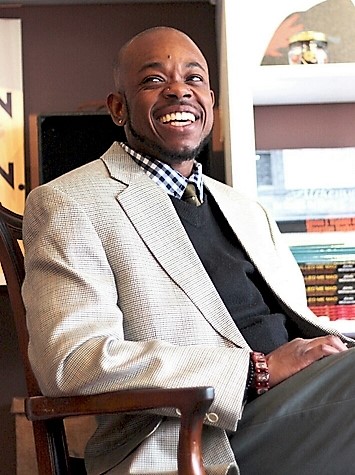 Rev. Merrick Moses has been a fixture in the Baltimore LGBTQ Community for many years. He lives at the intersection of queer and black identity, and is a person of great faith. Baltimore OUTloud spoke with Rev. Moses about his history, in honor of Black History Month.

Bill Redmond-Palmer: We’ve known and worked with each other for decades now, and your active role in the community is well known. Let’s start with a few things people may not know, like where you were born, and what brought you to Baltimore.

Merrick Moses: I was born in Brooklyn, in New York City, but was raised in Queens since the age of 3. I came to Baltimore because I received a full scholarship from Morgan State University in 1992. I got my psychology degree in 1996. Going to Morgan State was one of the best decisions I ever made.

You’ve long worked both inside and outside of the LGBTQ people of faith community. Talk about your faith journey.

In my teens I explored Islam, Santeria, and Buddhism. Eventually I became a practicing Buddhist in 1992, when I began chanting Nam Myoho Renge Kyo. I continue to chant because chanting is healing to me and provides me with insight and clarity.

I began to practice Catholicism again in 2002 a year after I came back to Baltimore. I attended St. Sebastian Independent Catholic parish pastored by Father (now Bishop) David Flaherty. It was there that I answered my long-held desire to give myself to God, first through a calling to the Diaconate in 2004, then to the priesthood in 2008. All of this happened in Baltimore, my spiritual home for most of my life.

You’ve always been unabashedly open about your queer identity. What’s been your personal journey as a queer person.?

As a kid, I always knew I was different, but I did not have the words to describe what that difference was. I didn’t come out until I was 20, after my mom died, while I was a junior at Morgan State. It was only after her death that I realized that I had been a lesbian for quite some time. However, I had always felt that there was more to me than my sexual orientation.

I was always a very masculine-of-center child. I was misgendered as a kid, many people thinking I was born in a male body, because of my clothes, but more importantly my energy. I wanted to walk in the world as boy and to the extent that my parents could, they allowed me to dress in boy attire. The gender rules changed however when puberty hit, leaving me confused and sad.

When I was 12, some man tried to sexually assault me on the way to school. The attempted assault made me fearful and caused me to further retreat into myself. Coupled with my parent’s separation, I lived a lot of my life in my head, imagining what it would be like to be free of all these girly confines and walk in the world as a boy.

As the years rolled by, I became increasingly uneasy in my body. My reproductive issues, together with my childhood traumas, only made my anxiety worse. In 2011, I began peer counseling as part of the process of figuring who I was really. The process eventually led me to enter therapy in 2014. At that time, I was finally ready to admit that I was and had always been a boy, a guy, with the goal of eventually developing into a man. In 2014, the medical part of my journey kicked off, and my evolution hasn’t stopped.

You have also been quite active within groups that support black queer people, and in others working to ensure representation of black people. What have you learned along the way?

Even while pursuing my vocation, I became a volunteer at Baltimore’s only black LGBTQ center, called the Portal. Founded by Rickie Green, it was a haven for many of us who wanted to affirm our blackness and queerness. I learned so much about myself, and gained many lifelong friends and mentors including Charlene Gaskins, my Buddhist mentor and mom, and “The Duchess,” Carlton Smith.

While volunteering at the Portal, I was hired as the field organizer for Equality Maryland. This is where I learned about Maryland politics.

My parents passed their pride in blackness to me. My ancestors were Garveyites and were involved in the early days of the creation of the National Association for the Advancement of Colored People (NAACP). Conscious hip hop of the 80s and 90s fed the African spirit within me. Becoming acquainted with traditional African spirituality helped my black consciousness evolve.

Morgan State really helped me to put the theory of “Black Uplift” into motion. It was there that my commitment to the liberation of African people was solidified.

The more I learned about the essential part that black LGBTQ people have played in the struggle for black liberation, I realized that as black queer and trans folks, we are an intrinsic part of black freedom movements globally. Nobody can ever take that away from us. We have always existed and will continue to do so undeterred in our will to survive and thrive.

What legacy do you hope that your work has left?