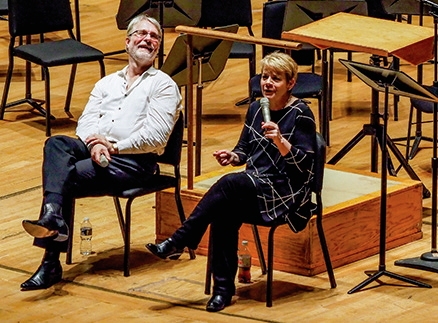 Did genius composer foretell his own end?

A mysterious stranger. An obsessive artist. An untimely death. This isn’t a new thriller movie; it’s Mozart’s mysterious Requiem. On Friday, December 1st and Saturday, December 2nd, Maestra Marin Alsop and the Baltimore Symphony Orchestra will perform the Requiem in D minor as part of the Off the Cuff series.

Off the Cuff is part of the BSO programming designed to take listeners deeper into the music. “The series began with Marin Alsop,” says BSO’s Izabel Zambrzycki. “She really wanted to create a new type of concert that would attract new and potentially younger audiences. It is a nice introduction to those who think they might be interested in attending the symphony, but it also works for seasoned audience members as well. It really is a program for everyone.”

BSO’s Rafaela Dreisin says Off the Cuff “provides a more behind-the-scenes concert experience. The program features a slightly shorter concert format, typically lasting an hour and is usually centered around a single piece of music. The concert format is akin to visiting a museum just to look at one particular painting that you really like.”

The intimate – and more casual – format allows audience members to learn about the history of the piece through a Q&A session with Maestra Alsop. “This performance will focus on Mozart’s Requiem, and there are so many different things to learn about this piece,” says Zambrzycki. “Marin will take you through a brief history of Mozart and his relationship with his father as well as his early travels around Europe as a child prodigy. Then she will focus more on the actual piece, how it was composed and the story that surrounds Mozart’s death. I don’t want to spoil too much, but some myths will be debunked!”

The performance on December 2nd will be followed by an after-party. “Guests attending the Mozart’s Requiem Off the Cuff performance should be prepared to stick around for a gothic-chic inspired after-party featuring live music by DJ Landis Expandis, martini specials, and food from Pinch Dumplings,” says Dreisin. “If you like hearing a mind-blowing performance, drinking martinis, and lots of candles – this event is for you!”

The Friday, December 1st performance at the Music Center at Strathmore will begin at 8:15 pm. The show and after-party on Saturday, December 2nd will begin at 7 pm at the Joseph Meyerhoff Symphony Hall. Tickets are available at BSOMusic.org or at the BSO box office.