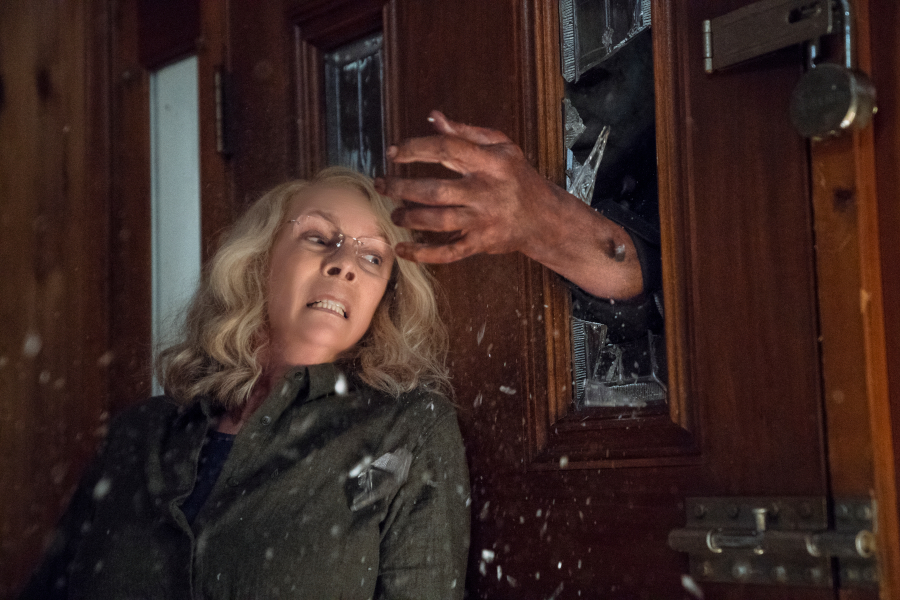 As of now, there are three movies within the same franchise with the title Halloween. There is, of course, the original 1978 classic, the 2007 reboot/remake, and now the 2018 model. Any movie with that title and a number or subtitle after it – minus Halloween III: Season of the Witch which tried to take the series in a new direction but failed – can be forgotten. Yes, even Halloween II because of one significant piece of story that movie introduced into the franchise that really was not part of the original: that Laurie Strode (Jamie Lee Curtis) was Michael Myers’ long lost sister, hence his reason for coming back time and again to kill her. Just put all those sequels in an alternative universe of Halloween movies, especially since Laurie dies in Halloween: Resurrection.

The latest Halloween could actually put a “II” behind the title, but that would really confuse things. It would be accurate since we’re putting the sequels somewhere else and this movie picks up 40 years after the original. Michael Myers is still in the mental health facility where he’s been since he was a child. His original doctor, Sam Loomis (Donald Pleasance), is long dead but he has a new doctor, Sartain (Haluk Bilginer), who has been studying Michael for decades, hoping to learn why he kills and what he feels when he kills, if only he could get Michael to speak. But his time is running out as Michael is due to be transferred to a high security facility soon.

With Halloween fast approaching, and probably not the best time to schedule Michael’s transfer, Laurie Strode is prepared as she always is, especially on that night, for anything that should come her way. She’s pretty much a survivalist, basically living off the grid, having trained herself like Sarah Connor, and pretty much estranged from her family. Yes, Laurie has a daughter and granddaughter – with no real explanation or backstory – but her daughter Karen (Judy Greer) had been taken by CPS when she was 12 and she’s never really had much of a relationship with her granddaughter Allyson (Andi Matichak) despite Allyson’s attempt to get some kind of reconciliation to happen. But Laurie does make an effort, particularly with Halloween approaching and Michael due to be transferred. Because Laurie knows Michael will stop at nothing to come for her and she’s right as the bus transferring Michael and the other prisoners goes off the road, freeing everyone and allowing Michael to make his way back into Haddonfield.

To say that Halloween is one of the most anticipated films of the year is probably an understatement. Fans of the series have been waiting for a new Michael Myers movie for some time, despite the varying quality of the previous sequels. To have Jamie Lee Curtis back as Laurie is a huge bonus, and it’s great that she’s willing to revisit the character after seeing her killed off. So is the movie any good? Was the wait worth it?

I would have to say yes indeed. It may not be the greatest movie of all time, but it certainly stands miles above most of the previous sequels and reboots. The writers, Davis Gordon Green, Danny McBride (yes, that Danny McBride), and Jeff Fradley, have an obvious love for the original movie and put a lot of care into crafting this story of Laurie Strode and Michael Myers, and Laurie’s complicated family dynamic. For Laurie, we have to admire her resilience and determination to protect herself but at the same time we have to feel kind of sad for her, seeing her holed up in her cabin in the woods, waiting for the Boogeyman to come once more. She does get out into the real world, but it seems she lives more of a solitary life training for the inevitable, which is what got her daughter taken away. Jamie Lee Curtis does a terrific job managing to not make Laurie seem like a lunatic always chasing shadows.

I liked the family dynamic between Curtis, Greer and Matichak as well. Greer’s Karen always has her walls up when Laurie is mentioned or makes an appearance, almost making her seem the unreasonable one for not taking her mother’s fears seriously. But she feels that after 40 years it’s really time for her to say goodbye to Michael Myers and live her life. Allyson just wants her grandmother to be a part of her life but the tension between her mother and grandmother is often too much to bear. So there is a good story here that you often don’t get in these types of movies (and thank the stars that this is a Blumhouse production and not Platinum Dunes or it would just be unlikable characters you root for to die).

And even though it is 40 years later, this Halloween feels like it belongs with the original. There are certainly visual callbacks to tie the two together, including a new play on the classic final moments of the original which saw Michael fall over a balcony, and a nifty bit of dialog that quickly dismisses the sequels. The opening titles are similar to the original, this time with a deflated Jack O’Lantern coming back to life, and more than just echoes of John Carpenter’s original score – John Carpenter actually worked on the score for this movie with his son Cody and Daniel A. Davies. Director David Gordon Green knows when to use that music and when not to.

And that’s what I think makes Halloween a more powerful viewing experience than most horror films … the silence. Yes the movie is filled with some shockingly horrific imagery when Michael kills his next victim, but there is the stifling quiet a few times that keeps you on the edge of your seat waiting to be scared silly, the sound of your heart beating the loudest thing you hear, particularly near the end of the movie as Laurie searches through her home for The Shape. Green refrains from using loud musical cues or absurd sound effects to deliver the scares (even a knife picked up from a wood cutting board sounds like a knife being picked up from a wood cutting board … no schwing sound effect!), letting the visuals, the camera work, the editing and the viewers’ minds do all the rest.

If I have any reservations about the movie, it’s the ending which does not really resolve much. It seems like it does but then it doesn’t, and if you sit all the way through the credits there is what could be considered an audio clue that this story is definitely not finished. I guess I assumed we’d get some closure with the Laurie Strode / Michael Myers story but that does not seem to be the case. Perhaps there will be one more to complete a trilogy that began in 1978. I guess I’m okay with that idea. But that one minor quibble aside, I think anyone who’s been waiting for this movie, a proper sequel to the classic, will not be disappointed.