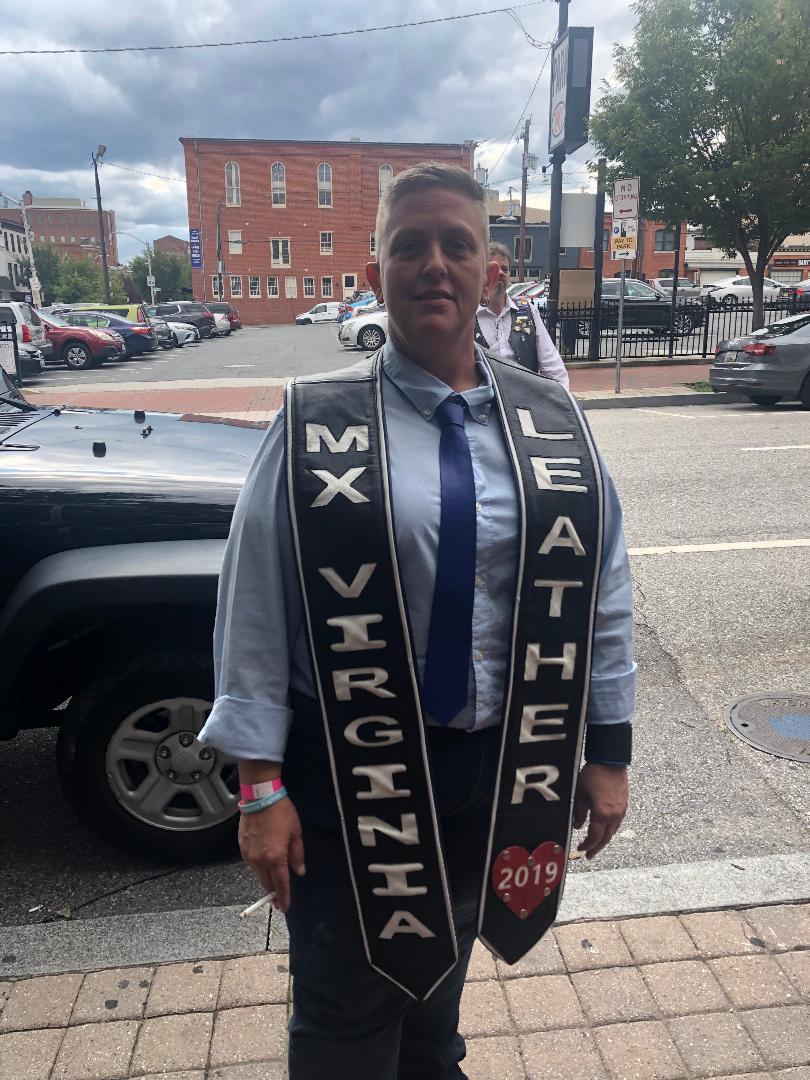 Mid-Atlantic Leather Woman Bootblack 2018 Bumper met lots of people while attending leather events in 2018. Many wanted to run for a leather title but only found Mr. titles and Ms. titles. What does one do if you are non-binary genderqueer? Bumper saw a problem with inclusivity in the leather community and in 2019 along with Ma’am Karen produced the first ever MX Virginia Leather Contest.

It is not easy being a leather titleholder. It is harder being the first one to hold a new leather title. It is even more difficult if that title is a new type of leather title. Making it all look easy is MX Virginia Leather 2019 / 2020 Sclena “Blue” Young.

I had the pleasure of meeting Blue several times in 2019. (Preferred pronouns “she”, “her” and “they”) With the cancelation of a planned MX Virginia Leather 2020 Contest in Richmond, Virginia in March, Blue has stepped up to carry the title another year. On July 25th we met again, but with all the problems with coronavirus, we met via FaceTime. Although we were not together in person, the charisma of this friendly leather person was evident, even on my phone screen.

Born and raised in Memphis, Tennessee, a career in the United States Navy had her living in several locations. She currently lives in Norfolk, Virginia. When I asked her what was her favorite place to live, she reminisced about living in Chicago when she was “in her 20’s and discovering life.” It was an exciting city with so much to see and do, unfortunately the winters were brutal. She returned to Chicago last year for American Brotherhood Weekend (ABW) and although this popular leather event was in October, she still froze.

Growing up in Memphis, she always knew she was “different.”  She was attracted to girls in school, not boys. By 19, she came to the realization that she was gay and being too young to go to bars, discovered a gay bookstore in town. The lady working in the store was very helpful and suggested a book called Stone Butch Blues by Leslie Feinberg. The novel told the story of a butch lesbian dealing with issues of gender expression and gender identity. It was an eye-opening read.

She discovered the leather community in the 1980’s while doing volunteer work for AIDS organizations. Many of the other volunteers were gay leather men. Later a friend got her a job cleaning in a gay bar in Memphis called The Pipeline (now called The Pumping Station) and she started hanging out there, eventually becoming a bartender. Since the clientele was predominately men, there was some resentment about having a female bartender. After a while guys stopped asking: “Why is there a dyke behind the bar?” and warmed up to her.                                     She met the men of the Tsars of Memphis leather club and helped with their events. In March of 2019 at the last minute, she decided to run for the MX Virginia Leather 2019 title. When asked what her favorite memory was of last year, she said marching in World Pride in New York City. Last year’s event in New York marked the 50th anniversary of the Stonewall Riots. She was there for the 25th anniversary and was thrilled to be there with a large group of leather titleholders for the 50th. It was an exciting, but long day. They waited seven hours in the heat before stepping off in the parade. She laughed and explained how everyone started taking leather off one piece at a time and rushed to put it all back on when it was time to march.

A successful leather titleholder is not just about parades and social events. Blue is also very proud and humbled by all the success she has had with fundraising. She designed a “We are enough” logo that incorporated various pride flag colors in the letters and produced patches, pins, t-shirts and hats raising over $6,000 for the Leather Heart Foundation, Trevor Project, and Transgender Assistance Programs of Virginia.

I couldn’t finish my interview without asking how Blue was dealing with this stressful year of canceled events and days of self-quarantine. She said that unfortunately she had just broken up with a partner prior to the start of the COVID-19 mess. It seems like bad timing. She fell into a routine of starting the day with Baltimore’s Coffee with Chris show live podcast followed by many afternoon naps. She felt like she wasn’t being very productive and started using her free time to remodel her apartment. She has lived there over four years and has no plans to move. It is a block away from the beach and she likes to walk there in the morning and see the sunrise. She has recently spent over $1,500 on redecorating. Zoom meetings with friends have also been a godsend. Although she lives alone, she is part of a COVID-19 pod of six friends that spend time safely together socializing and smoking cigars on a patio. It always helps to be with people.

I too am thankful for the time I get to spend with people. Our conversation was delightful and lifted my spirts. Blue is a person full of surprises. As MX Virginia Leather 2019 / 2020, Blue is not some stereotype of a LGBTQ + person. She said people are often taken aback when they see her bright pink toenail polish. She explains that it is in memory of a beloved aunt who died of breast cancer. Blue is a strong leather person working hard in her community and finished with: “It is amazing what we can do when we don’t fight each other.”